Moto Razr 2019 renders and in-box contents leaked: Here’s what we know so far 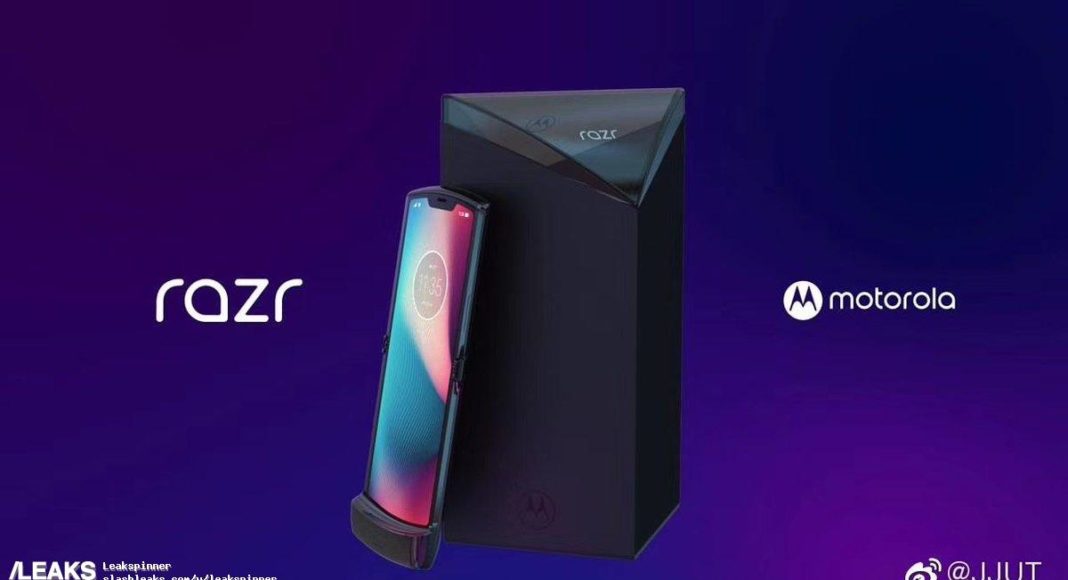 With Moto Razr 2019, Motorola is bringing the classic Razr foldable phone back from the dead. Moto Razr was one of the most popular and classic foldable phones a decade ago but now the Lenovo-owned company is bringing the 2019 version of the Moto Razr with smartphone capabilities and features. But before its official launch or announcement, a series of new photos have been leaked online showing the Moto Razr 2019 in its full glory. There is also a picture which reveals the in-box contents of the smartphone.

Earlier we saw that the Moto Razr 2019 has received its Bluetooth certification which further proved that the smartphone was in the making and it would be launched in 2019 itself.

Talking about the leaked images, we see that Moto Razr 2019 has a foldable screen which can be bended downwards like a flip-phone. While the in-box contents of the Moto Razr 2019 include earphones, charging cable, charging adapter, screen protector along with a USB Type-C to 3.5mm adapter. Since, the company is providing a Type-C to 3.5mm adapter, it proves that the device won’t be holding a headphone jack. The newly leaked images seem pretty much similar to the ones that had surfaced online earlier which strengthens the launch of the new foldable smartphone.

The new images have been leaked on Slashleaks, and they show that the phone bends forward (unlike any foldable smartphone we have seen till now) and its screen folds in on itself. The Moto Razr 2019 can be flipped open upwards to reveal the screen inside. Also, some previously leaked images of the smartphone reveals that there will also be a secondary small display on the outside of the folded phone. This small screen would show the notifications, calls, time and other important things. The users can also interact with the notifications and stuff from the outside screen as well without opening the main screen.

Coming to the specifications of the Moto Razr 2019, it should be noted that nothing is confirmed at this point. But according to the previous leaks of the Moto Razr 2019, the device will be powered by a Snapdragon 710 SoC paired with 6GB of RAM and 128GB of internal storage. The Moto Razr 2019 reportedly sports a 6.2-inch (876 x 2142 pixels) display panel. As we mentioned earlier, the front camera of the device being placed in a notch at the top of the display. On the other hand, the back camera will reportedly be placed on top/bottom of the smaller screen on the outside.

Although these specifications are just leaked online, but they too could be true as we have seen multiple times before in the past. But even so, the news should be taken with a pinch of salt.

Aman Singhhttps://www.gadgetbridge.com/
Aman Kumar Singh has a Masters in Journalism and Mass Communication. He is a journalist, a photographer, a writer, a gamer, a movie addict and has a love for reading (everything). It’s his love of reading that has brought him knowledge in various fields including technology and gadgets. Talking about which, he loves to tweak and play with gadgets, new and old. And when he finds time, if he finds time, he can be seen playing video games or taking a new gadget for a test run.
Facebook
Twitter
WhatsApp
Linkedin
ReddIt
Email
Previous articleOnePlus 7 Pro’s screen gets an A+ top tier rating from DisplayMate
Next articleRedmi 6 and Redmi 6A start receiving the MIUI 10.3 Android Pie update