Both the phones will be available for purchase via Flipkart in the country. 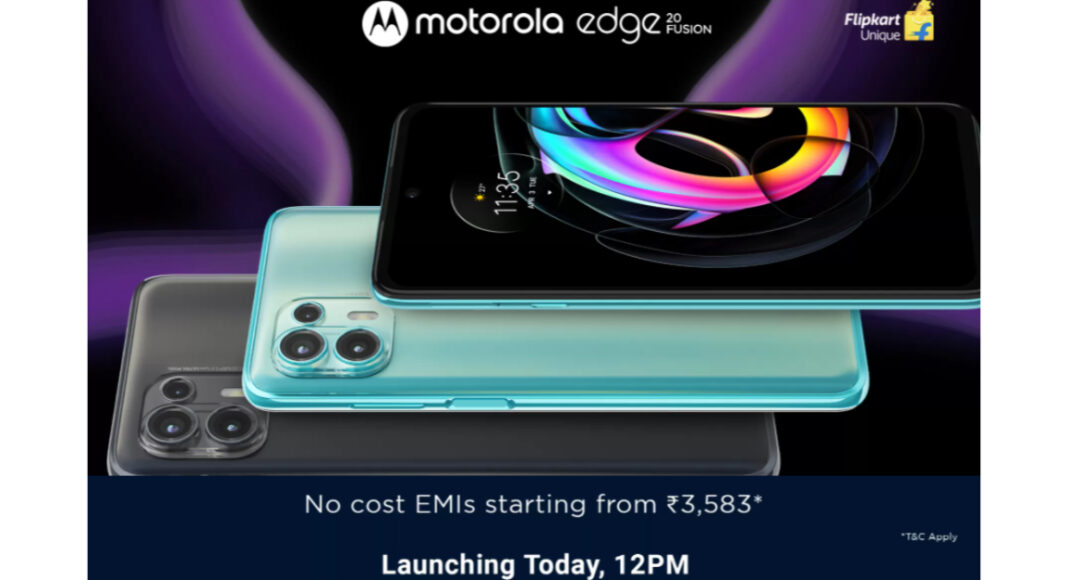 Motorola Edge 20 Series is all set to launch in India today. Yes, the company is going to introduce the Edge 20 and Edge 20 Fusion smartphones in the country. Before coming to India the company had already introduced the device a week ago in the European market. Both the phones have been listed on Flipkart to tease their availability. Previously Fusion also appeared on the Geekbench benchmarking website and the Indian pricing was also leaked ahead of the official launch.

Motorola Edge 20 and Edge 20 Fusion smartphones are going to launch in India today via Flipkart at 12 noon. The company has been teasing the key details of the smartphones through teasers and via a dedicated microsite in Flipkart. But recently Motorola Edge 20 Fusion was spotted on Geekbench which revealed that the device will be available in a 6GB RAM variant and will run Android 11 out of the box. In addition to this, the phone has scored 564 points in the single-core tests and 1,624 points in the multi-core tests.

Apart from this the Indian pricing of both devices were also leaked on the web. The Motorola Edge 20 is expected to be available with a single 8GB of RAM with a 128GB of storage variant that is likely to be priced at Rs 29,999. On the other hand, Motorola Edge 20 Fusion is tipped to come in two different configurations of 6GB RAM with 128GB storage and 8GB RAM with 128GB onboard storage priced at Rs 21,499 and Rs 23,999 respectively. These prices are not official so you can take it with a grain of salt.

Speaking of the specifications, the Motorola Edge 20 will run on My UX on top of Android 11. It will feature a 6.7-inch full-HD+OLED display with 1,080×2,400 pixels of resolution and a 144Hz refresh rate. Under the hood there will be an octa-core Qualcomm Snapdragon 778G SoC, paired with 8GB of RAM and 256GB of storage option.

On the camera front, Edge 20 will sport a triple rear camera setup that includes a 108-megapixel primary sensor, a 16-megapixel ultra-wide and macro lens, and an 8-megapixel telephoto lens with 3x high-res optical zoom and 30X Super Zoom. Upfront there is a  32-megapixel camera sensor for taking selfies and video calling.

The phone will pack a 4,000mAh battery with support for TurboPower 30 fast charging. For connectivity, there is 5G, LTE, Wi-Fi 6, GPS, and Bluetooth and more.

On the other side, Motorola Edge 20 Fusion is reportedly going to be a rebranded variant of Motorola Edge 20 Lite that comes with a 6.7-inch OLED display with 90Hz refresh rate support. The software support will be the same as its sibling but the handset will be powered by MediaTek Dimensity 800U SoC paired with 6ṣGB of RAM and 128GB of storage option. The phone may also include a 5,000mAh battery with 30W TurboPower fast charging support.

In terms of photos, Edge 20 Fusion will also come with a triple rear camera set up that includes a 108-megapixel primary sensor, an 8-megapixel sensor with an ultra-wide-angle lens with Macro Vision, and a 2-megapixel depth sensor. For selfies, there will be a 32-megapixel front-facing camera.

Komila Singhhttp://www.gadgetbridge.com
Komila is one of the most spirited tech writers at Gadget Bridge. Always up for a new challenge, she is an expert at dissecting technology and getting to its core. She loves to tinker with new mobile phones, tablets and headphones.
Facebook
Twitter
WhatsApp
Linkedin
ReddIt
Email
Previous article17 August 2021 Flipkart Daily Trivia Quiz Answers: Answer to win exciting prizes
Next articleNothing ear (1) is now available for pre-orders in India via Flipkart