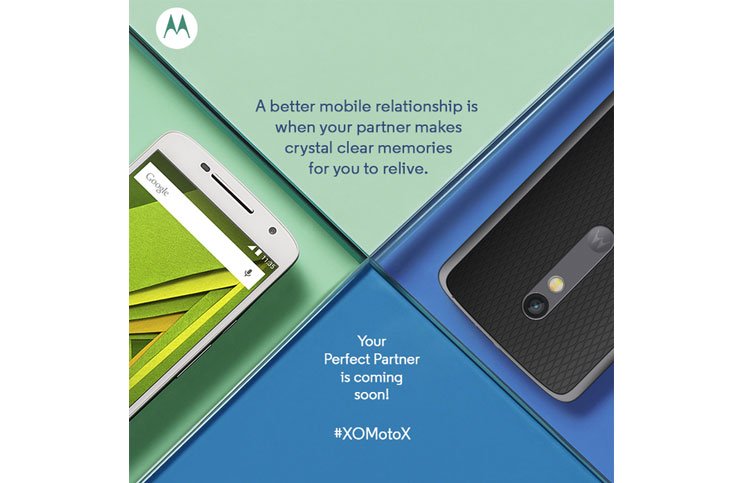 Motorola India tweets suggest that the Moto X Play is coming to India soon. But, have not revealed anything else. The price and the date are also not mentioned. The tweet only states “Tired of those hazy memories? Get hitched with a perfect partner with a 21MP rear camera. #XOMotoX”

The tweet has already suggested that the phone will have a 21 MP rear camera. So what about the rest of the specs? The front camera on this phone will be powered by a 5 MP sensor. The Moto X Play will come with a full HD 5.5-inch touchscreen with 400 PPi pixel density. On the on-board power front, this phone will have a 1.7 GHz octa-core CPU with 2 GB RAM built on the Qualcomm Snapdragon 615 chipset. The phone should support 4G LTE and will run Android 5.1 OS.

As far as the memory is concerned, the Moto X Play will come in two variants with 16 GB and 32 GB storage. A microSD card slot will also be there to expand the memory further. A 3,630 mAh battery will be on board that should give the users the much needed extra hours of play.

Sulabh Purihttp://www.gadgetbridge.com
Sulabh Puri is the Editor In Chief of GadgetBridge.com. A content specialist, he started his career young and it has been a rewarding 15 years for him. Before heading Gadget Bridge, he was the Editor of Times of India (TOI) Technology and GadgetsNow.com. He has also led TOI’s international edit arm as the Editorial Head of Business Insider India and Tech Radar India. He has also worked with various media houses such as the India Today Group and Cybermedia. He loves everything ‘gadgety’ and enjoys tinkering with new tech toys and automobiles. A graduate in commerce from Delhi University, he is also an adept graphic designer. When he is not working, he can be found in the kitchen, cooking mouth-watering chocolate cakes and croissants.
Facebook
Twitter
WhatsApp
Linkedin
ReddIt
Email
Previous articleViewSonic multimedia monitors VX2573sg and VX2573shw come to India
Next articleBSNL will give minimum 2 MBPS broadband speed to its customers from Oct 1