HomeMobilesMotorola P50 to launch in China this week: Key details

Motorola P50 to launch in China this week: Key details

It is said to be the rebranded version of Motorola One Vision. 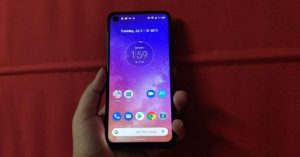 Lenovo’s Vice President Chang Cheng revealed on his Weibo account that the company will be launching Motorola P50 in China. In addition to this, the Motorola has confirmed that it will be launching Lenovo Z6 this week on Thursday, July 4. The post was accompanied by an image of the Motorola P50’s brown colour variant and it confirms that it looks similar to the Motorola One Vision. The company has also revealed the key highlight of the smartphone will be its 21:9 hole punch display. It will also sport a 48MP rear camera and 25MP front cameras with 3D curved glass build. Even Motorola One Vision comes with the same features.

For imaging duties, Motorola P50 will sport a 48MP primary camera with an f/1.7 aperture, accompanied by a 5-megapixel depth sensor. On the front, it will sport a 25MP snapper with an f/2.0 lens. Additionally, the phone will feature OIS and a dedicated Night mode for low-light photography.

The Motorola P50 houses a 3,500mAh battery with 15W Turbo Power for fast charging support and has 128GB of onboard storage and can hold a microSD card of up to 512GB. The smartphone is IP52 certified and measures 160.1×71.2×8.7mm and weighs 120 grams. The device comes in two colour options – Bronze Gradient and Sapphire Gradient.

Komila Singhhttp://www.gadgetbridge.com
Komila is one of the most spirited tech writers at Gadget Bridge. Always up for a new challenge, she is an expert at dissecting technology and getting to its core. She loves to tinker with new mobile phones, tablets and headphones.
Facebook
Twitter
WhatsApp
Linkedin
ReddIt
Email
Previous articleiOS 13 is set to change FaceTime calls forever
Next articleGoogle has made payments easier on Chrome: Here’s how