Among the most awaited phones from HMD Global is Nokia 9. And the company is just making fans longer for it as according to reports, Nokia 9 will not be unveiled this year. If you are waiting for it to launch, you will have to wait till MWC 2019.

But the rumour mill about the upcoming Nokia smartphone is still on. Although we did have an idea about what the device will look like thanks to images that have been leaked in the past, some new renders of Nokia 9 have leaked online. And the new renders, which come courtesy OnLeaks in collaboration with 91Mobiles, show the design of Nokia 9 from all angles. 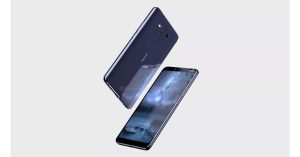 You can see the edge-to-edge display with thin bezels and no notch on top. According to reports, the upcoming Nokia device will sport a 5.9-inch QHD+ display that has an aspect ratio of 18:9.

Like Nokia 8 Sirocco (review), Nokia 9 smartphone will also come with a glass back panel. The glass on the back of Nokia 9 will curve around the edges of the device and since there is no physical fingerprint sensor on the device, the company may have replaced it with an in-display fingerprint scanner. 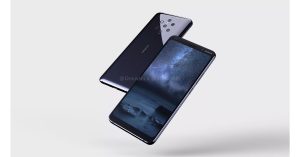 But the key feature of Nokia 9 mobile is the penta-lens setup on the back panel. The upcoming device will be the first ever smartphone to come with five rear cameras, unless some other technology company launches a device with penta-lens setup before Nokia 9’s launch.

The renders show the cameras arranged in a hexagonal pattern at the back panel of Nokia 9 smartphone. However, there are seven cut-outs and not six, as one lies right in the centre of all the other lenses. Out of these seven, five are camera sensors, one is LED flash, and the last one is expected to be used for proximity detection. 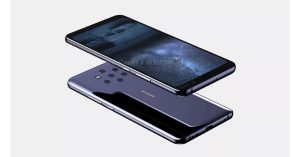 It is being said that HMD Global will be using Zeiss lenses and go for a Pureview branding. There are also reports that say that the phone will be called Nokia 9 PureView, but there are no official reports on it.

Nokia 9 will come with Android 9 Pie out of the box and will be powered by either Snapdragon 845 or 855 processor. Like most other Nokia smartphones that we have seen recently, Nokia 9 will be a part of Google’s Android One program. It is also rumoured to come with up to 8GB RAM, 128GB onboard storage and house a 4,150mAh battery.

Avani Baggahttp://www.gadgetbridge.com
Avani has an immense love for reading, travelling and food, but not necessarily in the same order. Avani almost started pursuing law, but life had other (better) plans for her and she chose to be a writer instead (luckily!) She previously covered technology at Times Internet and wrote about smartphones, mobile apps and tech startups. When she’s not writing, you’ll be able to find her in book stores or catching up on her social life.
Facebook
Twitter
WhatsApp
Linkedin
ReddIt
Email
Previous articleSamsung unveils its foldable phone with a new UI at its developer conference
Next articleOppo RX17 Pro, RX17 Neo with in-display fingerprint sensor launched: Price and specifications