The spotted listing on Flipkart suggests the laptop to feature a 14-inch Full HD resolution display with Dolby Vision support. 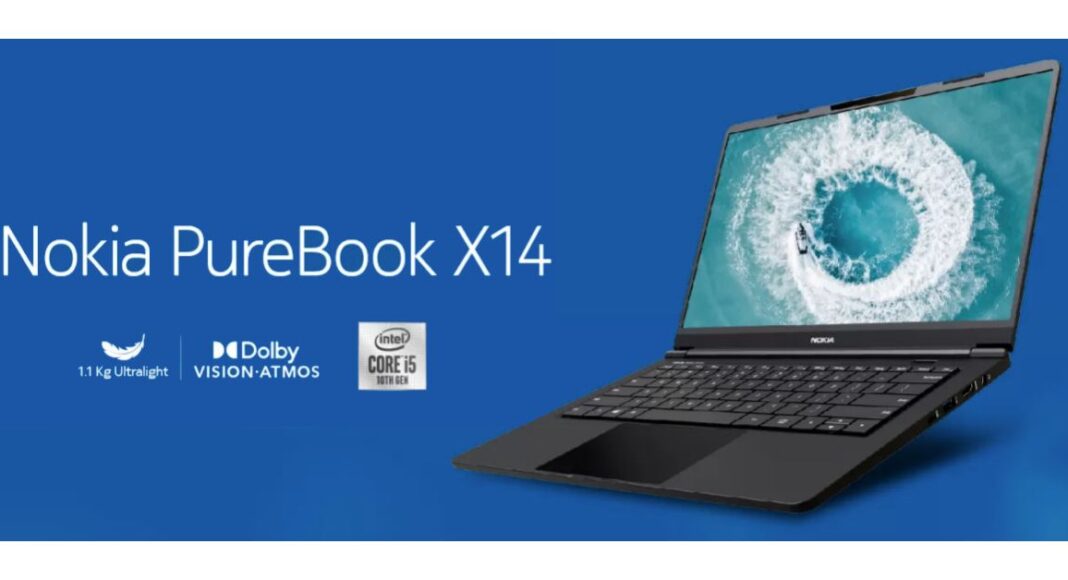 Nokia will officially launch its first laptop series in India. The Nokia laptop series includes the company’s first laptop namely Nokia PureBook X14. The new laptop will be available via the e-commerce website Flipkart in the country.  As per the dedicated microsite, the key features on the PureBook have been revealed just ahead of the launch. Until now there is no word from the company pertaining to the launch timeline of the Nokia laptop but Flipkart suggests it to be coming soon. In addition to this, not one but multiple laptops by Nokia have received BIS certification indicating to make their debut in India.

As being teased by an updated microsite on Flipkart suggests that  Nokia PureBook X14 will be available in a black colour option and will be featuring a chiclet-style keyboard. In addition to this, the laptop by Nokia will also include a touchpad bigger in size.

According to the microsite at least one model which Nokia PureBook X14 in the Nokia laptop series will include the 10th Gen Intel Core i5 processor. As per a report the listing of the upcoming laptop has also been spotted on the e-retailer website suggesting the 10th generation Intel Core i5-10210U processor coupled with 8GB DDR4 RAM and 512GB SSD storage. The internal storage can be expanded up to 16GB with the use of Intel UHD graphics. It could run Windows 10 Home edition and will further include two USB 3.1, single Type-C and USB 2.0 ports with an HDMI port, Ethernet port and headphone jack.

As per the listing, the Nokia PureBook X14 might also include a 14-inch Full HD resolution display offering 1920 x 1080 pixels of resolution with  Dolby Vision support. Moreover, the bezels on the sides are 4.8 millimetres thin with up to 178-degree viewing angle. The Nokia laptop is suggested to come with a magnesium-aluminium alloy body with a matte black finish weighing 1.1 kilograms.

The PureBook is also said to feature an HD IR Webcam that supports Windows Hello features to unlock the laptop and a keyboard offering 1.4 millimetres key travel with backlight support. In addition to this, the notebook might also include a  46.7 WHr battery claiming to last up to 8 hours on a single charge.

The listing also reveals to offer the Nokia PureBook X14 with a price tag of Rs 90,000 however this is not the actual pricing and the company might reveal confirmed pricing at a later date when the official launch of the device happens.

However, these SKUs in the BIS Listing are likely to be other models of the Nokia laptop series that might or might not launch along with Nokia PureBook. But the teased model is expected to launch by the end of this month.

Komila Singhhttp://www.gadgetbridge.com
Komila is one of the most spirited tech writers at Gadget Bridge. Always up for a new challenge, she is an expert at dissecting technology and getting to its core. She loves to tinker with new mobile phones, tablets and headphones.
Facebook
Twitter
WhatsApp
Linkedin
ReddIt
Email
Previous articleDecember 14 Flipkart Daily Trivia Quiz Answers: Answer to win exciting prizes
Next articleWhatsApp Carts: Here is how to shop on WhatsApp using this feature