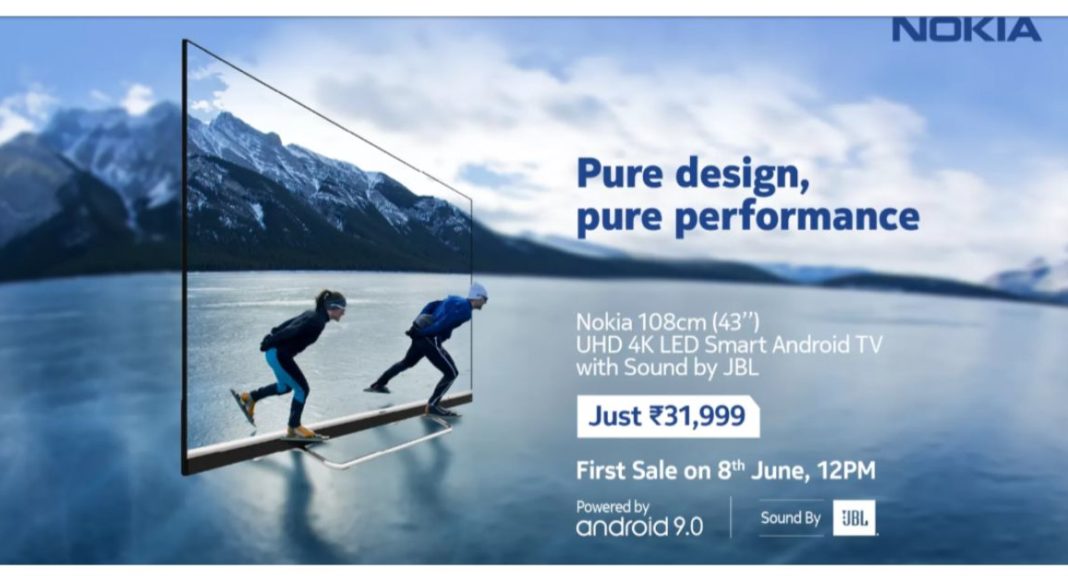 Nokia Smart TV 43-inch has been officially launched in India today. The Television is the company’s second Smart TV which joins the company’s 55-inch model. To launch the TV the company has already tied up Flipkart to foray into the TV industry when it launched its first Smart TV. The Nokia branded smart TV is now available on the e-commerce platform which comes with a 43-inch screen display.

Nokia Smart TV 43-inch has been launched with a price tag of Rs  31,999. The Smart Television will be available via e-commerce website Flipkart which is the license to develop as well as put it in the market with Nokia’s branding. The television is scheduled to go on sale in the country starting June 8, 12 noon onwards. The Notify button has gone live on Flipkart and the interested customers now have the chance to notify themselves through a “Notify me” button. The TV will exclusively be sold countrywide only by Flipkart with a few offers which include 5 percent unlimited cashback on Flipkart Axis Bank credit card, 10 percent off on Axis Bank Buzz credit card. Additionally, there will be Rs 15,00 off on  Citi debit and credit cards. These offers are also applicable to no-cost EMI options that start at  2,667 per month. On the purchase of the Nokia branded smart TV there will be a free YouTube Premium subscription for three months.

It stands on a  V-shaped fluid chrome pedestal stand. The Television derives its power from a 2GHz CA53 quad-core processor coupled with Mali450 quad-core GPU for graphics. It offers 2.25GB of RAM and  16GB of internal storage. The Nokia smart TV comes preloaded with video streaming apps such as Netflix, Amazon Prime Video, Disney+ Hotstar as well as YouTube. Google Play store is integrated along with 2.4GHz Wi-Fi, and Bluetooth 5.0 offering connectivity options.

Komila Singhhttp://www.gadgetbridge.com
Komila is one of the most spirited tech writers at Gadget Bridge. Always up for a new challenge, she is an expert at dissecting technology and getting to its core. She loves to tinker with new mobile phones, tablets and headphones.
Facebook
Twitter
WhatsApp
Linkedin
ReddIt
Email
Previous article
Life after lockdown: The new technological revolution post lockdown
Next article
COVID-19 crisis: This AI system knows why you can’t concentrate on work