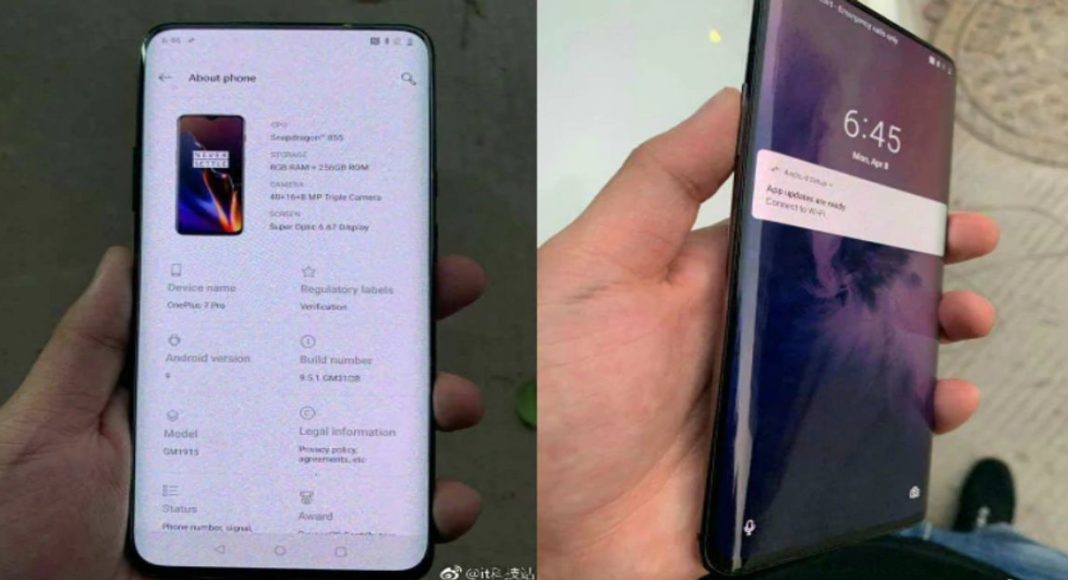 Chinese smartphone brand OnePlus will soon be seen launching the OnePlus 7 handset, and prior to its launch, some details of the upcoming device have been leaked. Or rather, we should say that it is the latest leak about OnePlus 7, since details about the smartphone have been circulating online since months now. The recent leaks reveal that there will be multiple variants of the upcoming OnePlus 7. In addition to this, OnePlus 7 Pro was spotted on the Chinese social networking platform, Weibo which revealed its design, details and specifications. The OnePlus 7 Pro was also spotted on the Bluetooth certification site which further confirms that the device will be launched soon.

OnePlus 7 Pro’s images had been leaked on Weibo which shows that the device will sport a dual edged display that is very similar to the one we saw on Samsung Galaxy S10+. The images further revealed that the OnePlus 7 will have a notch-less and hole-less display similar to the new Oppo or Vivo smartphones, ehich further indicates that the device will pack a pop-up selfie camera. There is also an ‘About Phone’ image leaked alongside the leaked photos that reveals some specifications of the OnePlus 7.

According to the leaked image, the OnePlus 7 Pro sports a 6.67-inch Super Optic display and is powered by a Snapdragon 855 SoC paired with 8GB RAM and 256GB of internal storage. There is also a mention of a triple rear camera setup in the leaked image, which is said to comprise of a 48MP primary sensor, a 16MP sensor and an 8MP sensor. Although the triple rear camera setup is mentioned but the back side of the device has not been revealed in the leaked image. Furthermore, the device seems to run on Android Pie.

Aman Singhhttps://www.gadgetbridge.com/
Aman Kumar Singh has a Masters in Journalism and Mass Communication. He is a journalist, a photographer, a writer, a gamer, a movie addict and has a love for reading (everything). It’s his love of reading that has brought him knowledge in various fields including technology and gadgets. Talking about which, he loves to tweak and play with gadgets, new and old. And when he finds time, if he finds time, he can be seen playing video games or taking a new gadget for a test run.
Facebook
Twitter
WhatsApp
Linkedin
ReddIt
Email
Previous article
ESL One Mumbai 2019 to begin on April 19: Teams to battle over the lion’s share of $300,000
Next article
[Video] Moto G7 Unboxing, first impressions and camera test