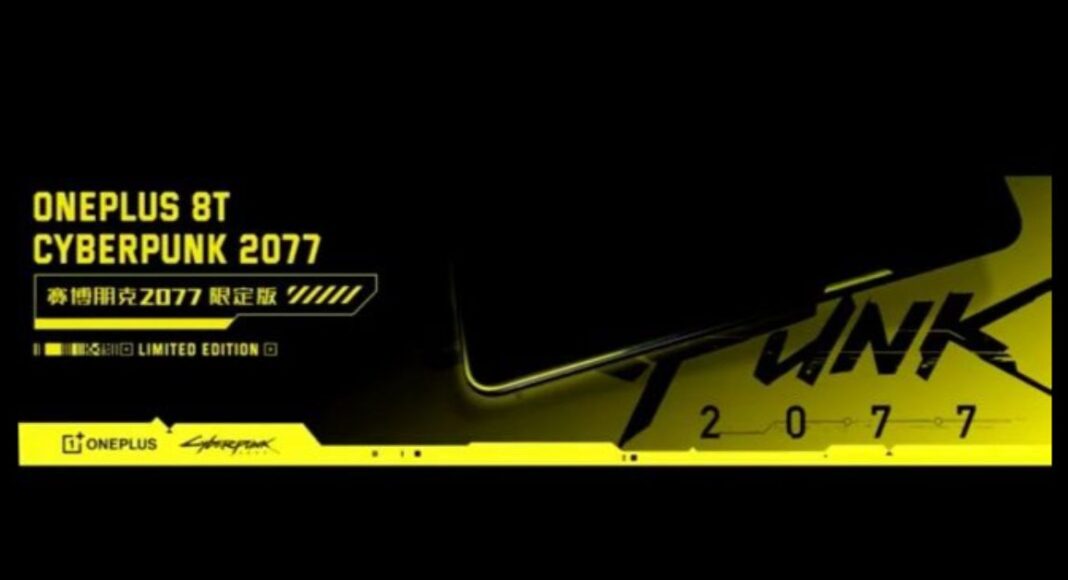 OnePlus 8T Cyberpunk 2077 Limited Edition is set to launch today. The company has been teasing the phone via its social media for quite some time now. The company has also partnered with CD Projekt Red who has designed the special edition phone. In addition to this, the pre-orders will start on November 4. Not much has been revealed about the smartphone but the teasers suggest that the phone will come with a textured back with yellow accents. The design goes in line with the company’s highly anticipated upcoming game Cyberpunk 2077. Also, the game was slated to launch on November 19 but it has now been delayed for the third time to December 10.

OnePlus 8T Cyberpunk 2077 Limited Edition will launch today in China. The Special edition phone will be launching through an online launch event that will kick start at 11.30 AM IST and 2 PM local time.

The device is confirmed for pre-orders from November 4 in China. However, it is still unclear if it will make its way to the Indian market as well. Put the device is suggested to be offered in a 12GB RAM with 256GB storage priced at CNY 3,999 that translates to Rs 43,600. Also, OnePlus 8T Cyberpunk 2077 Limited Edition will have a modified back panel with a grey textured finish along with yellow accents on the sides of the phone and the black camera module with the Cyberpunk 2077 branding on it.

OnePlus 8T Cyberpunk 2077 Limited Edition is a special edition phone-based the company’s cross-branding partnership with CD Projekt Red’s upcoming game Cyberpunk 2077. In the past, the company has also launched special McLaren Edition smartphones for OnePlus 6T and OnePlus 7T Pro. So, the upcoming smartphone is most likely to come with the same internals as the OnePlus 8T. It will feature a 6.55-inch flat fluid AMOLED display with 1,080×2,400 pixels of resolution, 91.1 percent screen-to-body ratio and 120hz refresh rate with HDR10+ support.

The special edition phone will run Android 11-based OxygenOS 11. The OnePlus 8T Cyberpunk 2077 Limited Edition will be powered by Qualcomm Snapdragon 865 SoC. The device will be featuring a quad rear camera set up onboard with a 48-megapixel primary sensor with optical image stabilisation (OIS), a secondary 16-megapixel ultra-wide-angle sensor with a 123-degree field of view, a 5-megapixel macro lens and a 2-megapixel monochrome sensor. While on the front it has a 16-megapixel selfie camera.

Komila Singhhttp://www.gadgetbridge.com
Komila is one of the most spirited tech writers at Gadget Bridge. Always up for a new challenge, she is an expert at dissecting technology and getting to its core. She loves to tinker with new mobile phones, tablets and headphones.
Facebook
Twitter
WhatsApp
Linkedin
ReddIt
Email
Previous article
November 2 Amazon Quiz: Answer five easy questions to win Rs 50,000 Amazon Pay Balance
Next article
Atmanirbhar app by Mitron- A dedicated platform to discover Made in India applications launched in India