OnePlus Watch with over 110 workout modes launched in India: Check out the pricing and availability details

This smartwatch doubles as a controller for those having OnePlus TV. Read on to know more. 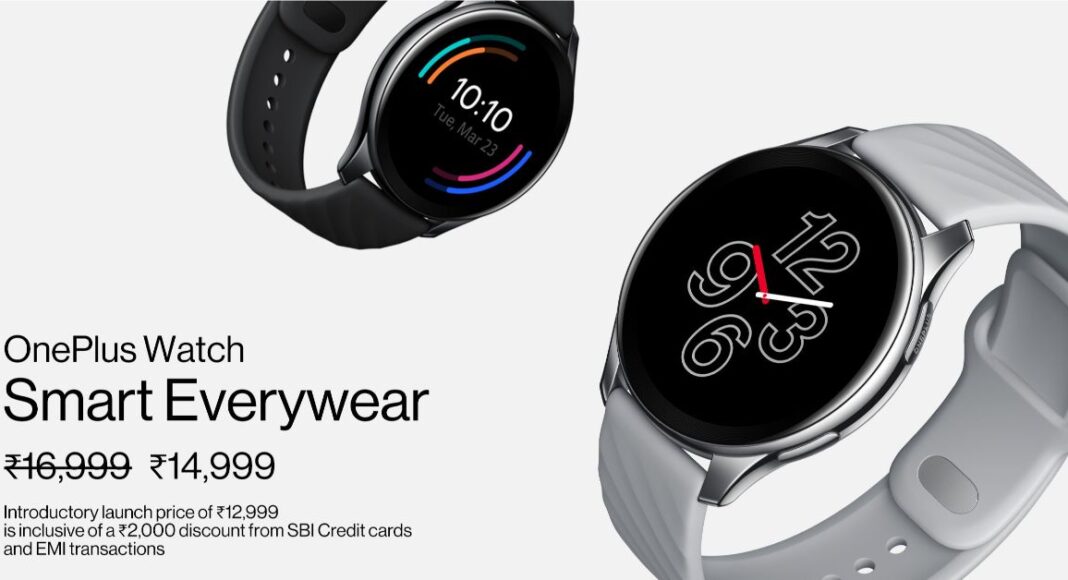 OnePlus officially introduced the OnePlus Watch that has a circular design, alongside the OnePlus 9 Series in India. The company made this announcement during the online event yesterday. The OnePlus wearable comes with a seamless wireless connection hence allowing you to receive voice calls and app notifications directly on your wrist. The device offers over 110 workout modes and it also doubles as a remote control if you have a OnePlus TV at your place.

OnePlus Watch has been introduced in India with a price tag of Rs 16,999. However globally the company has launched this wearable at a much lesser price, which is at EUR 159 that translates to Rs 13,700. According to the company, the OnePlus smartwatch’s pre-orders are slated to begin in early April. It would be offered in a Stainless Steel case with Midnight Black and Midnight Silver shades. But there will also be a Cobalt Limited Edition version, which is a Cobalt Alloy case in Gold colour.

OnePlus Watch comes with a unibody design having a stainless steel body with a glossy CD pattern on the display. It features a 46mm round dial with a 2.5D curved glass AMOLED display. The smartwatch runs on RTOS-based OS while offering 4GB standalone storage. The device is 5ATM and IP68 rated for water and dust resistance.

As said, the OnePlus Watch features 110 workout modes and can automatically detect workouts such as jogging marathon, outdoor cycling, indoor cycling, freestyle training and running as it has inbuilt sensors on it. Like we said earlier, this smart wearable comes with a seamless connection, hence allowing you to receive voice calls and app notifications directly on your wrist. Over that, you can also use it as a remote control for the OnePlus TV. Moreover, you can turn the TV off after 30 minutes from your wrist when it detects that you have fallen asleep or it turns the volume down if you get an incoming call.

Apart from fitness and other sensors it also includes some important health monitoring features such as SpO2, stress detection, breathing, rapid heart rate alerts, and sedentary reminders. In addition to this, the watch gets support for Bluetooth as well as GPS as connectivity options.

OnePlus Watch has a 405mAh battery, which comes with Warp Charge fast charging support. It is said to last for about a week with 20 minutes of charge and can run for a whole day with just five minutes of charge. On nominal use, it can last for up to 2 weeks.

Komila Singhhttp://www.gadgetbridge.com
Komila is one of the most spirited tech writers at Gadget Bridge. Always up for a new challenge, she is an expert at dissecting technology and getting to its core. She loves to tinker with new mobile phones, tablets and headphones.
Facebook
Twitter
WhatsApp
Linkedin
ReddIt
Email
Previous article
Top 5 gadgets to make your home safer
Next article
Google resolved Gmail and Chrome Crash issue by releasing the Android System WebView update