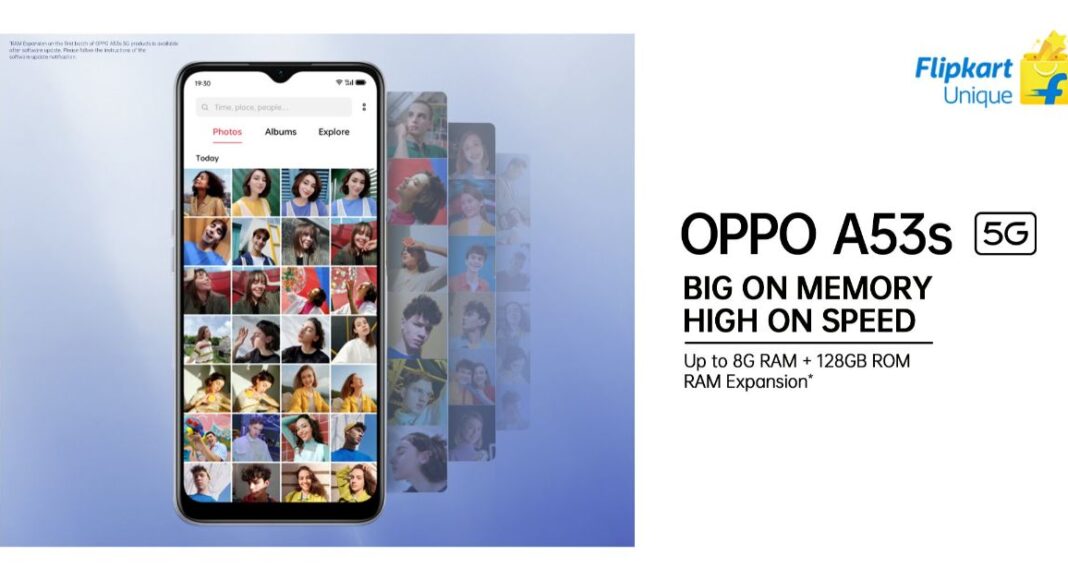 After launching Oppo A54 and A74 in the Indian market the Chinese smartphone company is all set to launch another A-Series phone in the country. Today the company has scheduled to launch the Oppo A53s 5G smartphone, which is a follow-up device to Oppo A53. The new phone will be powered by MediaTek Dimensity 700 SoC that will come with large memory and storage.

Oppo A53s will be launching today at noon via Flipkart. This smartphone has been listed on the e-commerce website already, to tease its availability. As per the listing, this 5G phone will come in a blue gradient finish however it will also be made available in more colour options. It should also be noted that Oppo A53 5G is going to be the first budget 5G smartphone to be priced under Rs 15,000. The company stated that “The new smartphone is aiming at breaking all records, by bringing in the most affordable device to its consumers, which is 5G ready and packs in a powerful and advanced MTK700 processor, under the hood.”

As we already said, Oppo A53s is an offspring of Oppo A53 5G that was launched in the market last year so the specification will be a bit similar. The device is confirmed to be powered by MediaTek Dimensity 700 SoC, which is based on a 7nm process with two Cortex-A76 cores clocked at 2.2GHz and six Cortex-A55 cores clocked at 2.0GHz.

It will be featuring a rectangular shaped triple rear camera setup with flash support. It is likely to include a 48 or a 64-megapixel primary sensor, a 2-megapixel depth sensor and another 2-megapixel macro lens. While on the front it might include an 8-megapixel selfie camera. As per the listing, there will be a side-mounted fingerprint sensor for security doubling up as the power button.

The Oppo A53s 5G is also expected to feature a 90Hz refresh rate screen. The Flipkart listing has also revealed that the phone will be available in two different configurations of 6GB RAM with 128GB storage and 8GB RAM with 128GB storage. Moreover, the company says there will be a 5,000mAh battery and 18W fast charging support. On the connectivity front, it might include Bluetooth 5.1, NavIC GPS, Wi-Fi 5 standard and more.

Komila Singhhttp://www.gadgetbridge.com
Komila is one of the most spirited tech writers at Gadget Bridge. Always up for a new challenge, she is an expert at dissecting technology and getting to its core. She loves to tinker with new mobile phones, tablets and headphones.
Facebook
Twitter
WhatsApp
Linkedin
ReddIt
Email
Previous article
April 27 Flipkart Daily Trivia Quiz Answers: Answer to win exciting prizes
Next article
Google accidentally revealed the Pixel 5a camera samples and details: Expected features and release date