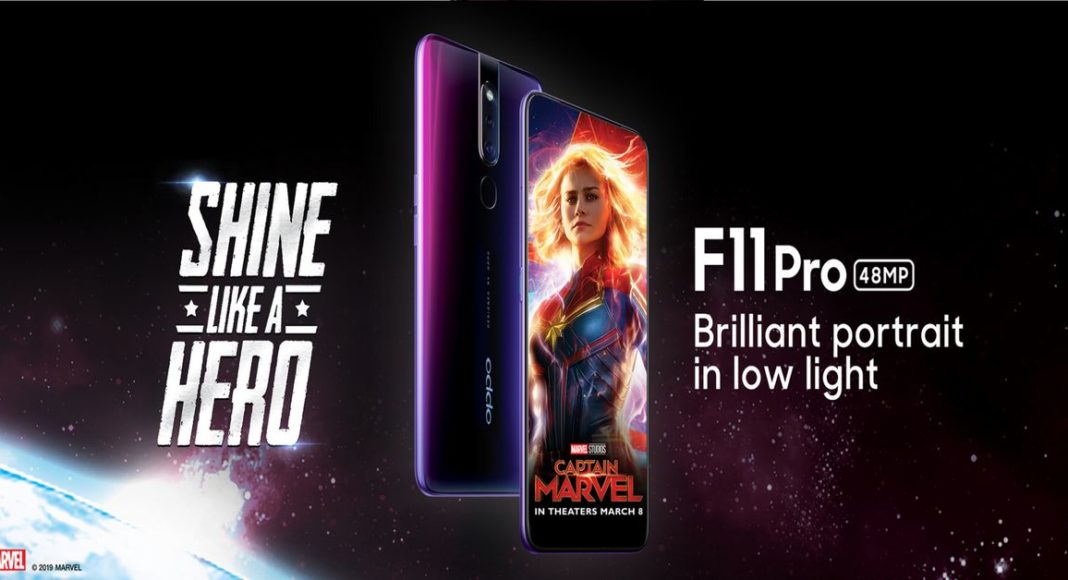 Chinese smartphone maker Oppo is all set to launch its F11 Pro smartphone in India on March 5. But ahead of its scheduled launch date the specifications of the device have been leaked on Geekbench. The leaks specify that Oppo F11 Pro will be powered by a MediaTek P70 SoC and will have 6GB of RAM. Oppo F11 Pro smartphone will run on Android 9.0 Pie with the company’s ColorOS 6 on top.

The leaked smartphone specifications on Geekbench was spotted by Droidshout. According to the leaks, the model number of the Oppo F11 Pro is CPH1969. The single-core score of the Oppo F11 Pro is listed at 1,573 while the multi-core score is listed at 5,844. According to the listing, the smartphone sports a 6.5-inch Full HD LTPS LCD display with a 1080 x 2340 resolution and screen-to-body ratio of 90.9%. The smartphone is expected to come in two storage variants – 64GB and 128GB storage.

Besides this, a few other details about the smartphone have been reported by MySmartPrice. The Oppo F11 Pro smartphone will pack a dual rear camera setup with a 48MP primary sensor with an f/1.79 aperture and the other camera will be a 5MP sensor with f/2.0 aperture. It will reportedly pack a 4,000mAh battery and will have Wi-Fi, Bluetooth 4.2, GPS with A-GPS, GLONASS and BeiDou for connectivity. It is expected to weigh around 190 grams and measures at 161.3 x 76.1 x 8.8 mm. The reports further mention that there will be Aurora Green and Thunder Black colour options along with a triple colour gradient variant of the smartphone.

Some confirmed features of the Oppo F11 Pro include the 48MP primary camera, VOOC 3.0 fast charging support along with Super Night mode for better low light photography. The presence of a pop-up selfie camera like the Vivo V15 Pro which was launched a week ago. The smartphone’s back panel will sport a rear fingerprint sensor unlike the Vivo V15 Pro which houses an in-display fingerprint scanner.

It's your time to shine. ⭐
Get a #BrilliantPortrait, even in low light. ✨#OPPOF11Pro is coming soon.📲 pic.twitter.com/KfZ96bTVE5

Oppo released a product overview video of the F11 Pro which showcases some of the features and specifications it will have. It might be priced at the sub Rs 12,000 – 15,000 range with closest competitor being the Redmi Note 7 Pro.

Aman Singhhttps://www.gadgetbridge.com/
Aman Kumar Singh has a Masters in Journalism and Mass Communication. He is a journalist, a photographer, a writer, a gamer, a movie addict and has a love for reading (everything). It’s his love of reading that has brought him knowledge in various fields including technology and gadgets. Talking about which, he loves to tweak and play with gadgets, new and old. And when he finds time, if he finds time, he can be seen playing video games or taking a new gadget for a test run.
Facebook
Twitter
WhatsApp
Linkedin
ReddIt
Email
Previous article
Realme 3 with 4,230mAh battery, MediaTek Helio P70 processor teased on Flipkart ahead of launch
Next article
Oppo R17 Pro price in India reduced by Rs 6,000