The device will be available for pre-order via Amazon 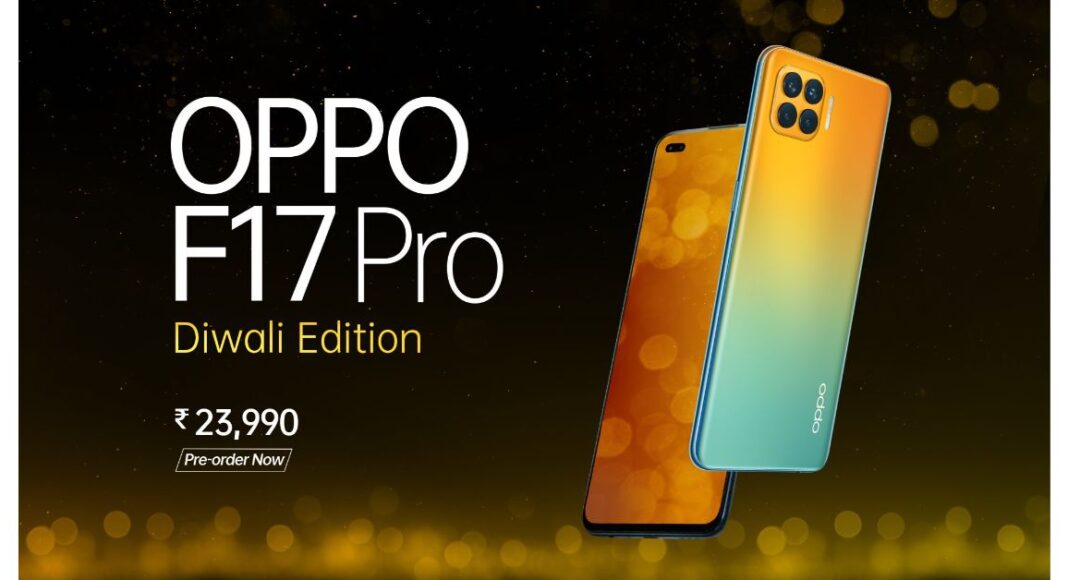 The Chinese smartphone company Oppo today announced that the Oppo F17 Pro Diwali Edition is now up for pre-bookings in the country. The New Matte Gold colour options join the other three colour options available. To recall Oppo F17 Pro was launched last month along with a standard variant and to celebrate the festive season this Diwali has arrived with a new colour option. In addition to this, it has also launched a ‘Be The Light Spread The Light’ campaign to spread a positive message during the tough times.

Oppo F17 Pro Diwali Edition price in India has been set at Rs 23,990. The device is scheduled to be up for sale starting October 19 in the country via Amazon. But at the moment it has been listed for pre-orders. To get the latest updates the Notify Me button has also gone live. The special edition phone will be available in a matte gold finish. According to the company, those who are pre-booking the device will get a special gift box that will include Oppo 10,000mAh Power Bank along with an Exclusive Diwali Back cover.

The special edition device of the Oppo F17 Pro is pricier than the regular variant. To recall, F17 Pro was launched in India in a single configuration at Rs 22,990. This comes in three colour options Magic Black, Magic Blue, and Metallic White.

Oppo F17 Pro Diwali Edition comes with identical specification as the regular variant. The device features a 6.43-inch full-HD+ Super AMOLED display with 1,080×2,400 pixels of resolution with a 20:9 aspect ratio and a 90.7 percent screen-to-body ratio and 60Hz refresh rate panel with a hole-punch design. It runs on ColorOS 7.2 on top of Android 10 and is powered by an octa-core MediaTek Helio P95 SoC paired with 8GB of RAM with 128GB of storage.

The device packs a 4,000mAh battery with 30W VOOC Flash Charge 4.0 fast charging technology. For connectivity, there is a 4G VoLTE, Wi-Fi, Bluetooth, GPS/ A-GPS, and USB Type-C, and a 3.5mm audio jack.

Komila Singhhttp://www.gadgetbridge.com
Komila is one of the most spirited tech writers at Gadget Bridge. Always up for a new challenge, she is an expert at dissecting technology and getting to its core. She loves to tinker with new mobile phones, tablets and headphones.
Facebook
Twitter
WhatsApp
Linkedin
ReddIt
Email
Previous articleLogitech G733 LIGHTSPEED wireless gaming headset launched in India
Next articleiQoo U1x specifications and renders leaked ahead of the official launch will be powered by Qualcomm Snapdragon 662 SoC