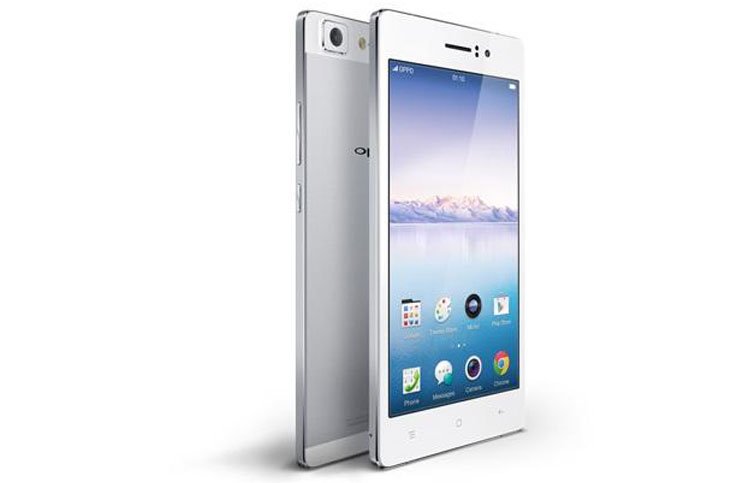 OPPO, the Chinese smartphone maker is trying hard to carve a niche in the Indian market with its inexpensive yet sturdy smartphones. They have just unveiled an upgraded variant of R5 smartphone, called OPPO R5s. This smartphone will be available in white colour. The OPPO R5s measures 148.9×74.5×4.85mm and weighs 155 gram.

On the specification front, the OPPO R5s has a 5.20-inch full HD (1080×1920 pixels) AMOLED display. Powering the smartphone is a 1.5GHz Octa-Core Qualcomm Snapdragon 615 processor paired with 3GB of RAM. The on board storage of the mobile phone accounts to 32GB, which can be expanded by using a microSD card. This smartphone runs ColorOS 2.0 based on Android 4.4 KitKat operating system. For graphics an Adreno 405 is also on board.

The OPPO R5s sports a 13-megapixel rear camera, which comes with LED flash and Sony IMX214 sensor. There is also a 5-megapixel front camera. This mobile phone houses a 2,000 mAh battery. This smartphone also features VOOC charging technology. The device supports two SIM cards that work on 4G LTE or 3G. Other connectivity options include Wi-Fi, Bluetooth and GPS.

The OPPO R5s will be available soon across India. The price for this one will be approx. Rs 15,000.

Sahiba Sethhttp://www.gadgetbridge.com
Sahiba Seth is a student, pursuing English (Hon) from Delhi University. She has been a trainer of HYTSE (Helping Youngsters To Speak English) in her school. She loves to interact with people and she is crazy about gadgets like mobiles and cameras. She likes to read and search about gadgets, and their features. She loves to stay in tune with the happenings of Hollywood and Bollywood. Also, she is passionate about reading novels and creative arts.
Facebook
Twitter
WhatsApp
Linkedin
ReddIt
Email
Previous article
Zebronics brings the latest Companion 6 wireless mouse & keyboard
Next article
Vivo X5Pro Review: A stylish sleek flagship smartphone