Poco C31 launching in India today: Here is how to watch the Livestream

The device is teased to be powered by MediaTek Helio G35 SoC. 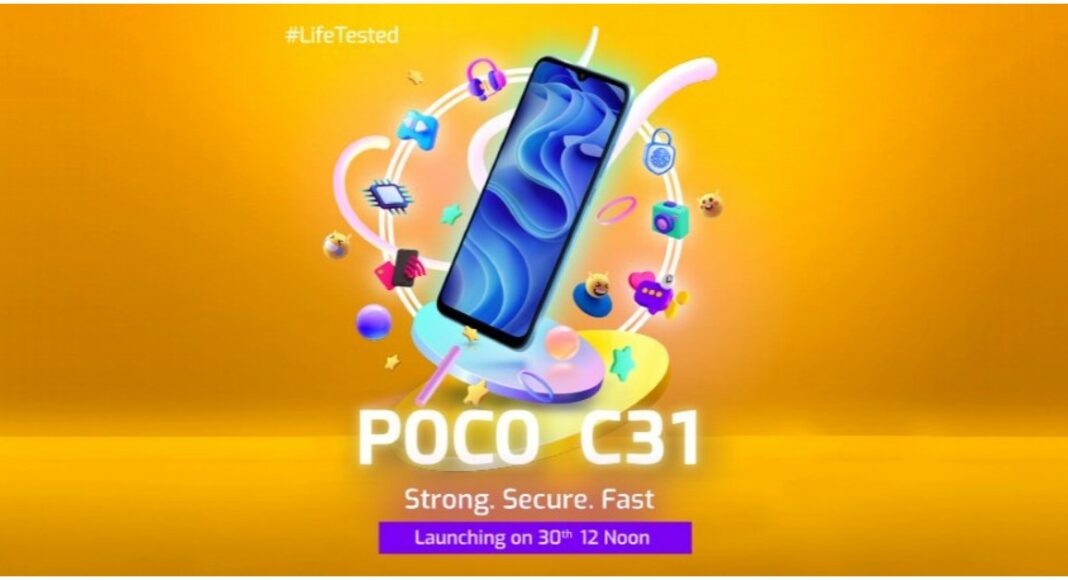 Poco C31 is all set to launch as the company’s latest offering in India today. The new Poco C-Series smartphone will debut as its latest budget smartphone. Ahead of the launch, the device was also listed on Flipkart and the sale is expected to kick off from the Big Billion Days Sale 2021.

Not much has been revealed about the smartphone but teasers suggest a MediaTek Helio G35 SoC and a waterdrop style notch display.

Poco C31 launch in India will take place today. The company will be hosting an online launch event to present the phone. The launch event will kick start at 12 noon and will be Livestream through the company’s social media channels as well as on its YouTube channel.

We have embedded the link below for your convenience so that you don’t miss out on today’s event:

As for the pricing, Poco C31 is expected to debut under the budget price segment. The price of the device is likely to start at Rs 10,000 in India however there is no official confirmation from the company.

But Poco has already revealed that its upcoming smartphone will be available for purchase through Flipkart. This means the device could go on sale during the Big Billion Days Sale that will begin from October 3 that is on Sunday.

According to the microsite and teasers, Poco C31 will be featuring a waterdrop notch on the display to house the selfie camera. It will have a slim build with slim bezels and a relatively thicker chin area. There will be a fingerprint sensor and a face unlock too.

According to the company the print sensor has been tested over 600,000 times for protection and is claimed to remain as good as new after 2.5 years of daily usage as it will get you a 25% longer lifespan compared to its rival. There will be an octa-core MediaTek Helio G35 chipset paired with 4GB of RAM and will run on MIUI for Poco based on Android.

Komila Singhhttp://www.gadgetbridge.com
Komila is one of the most spirited tech writers at Gadget Bridge. Always up for a new challenge, she is an expert at dissecting technology and getting to its core. She loves to tinker with new mobile phones, tablets and headphones.
Facebook
Twitter
WhatsApp
Linkedin
ReddIt
Email
Previous article
Vivo X70, Vivo X70 Pro and Vivo X70 Pro+ launching in India today: What to expect
Next article
Best 4 ways to remove Chinese apps from your Android smartphone