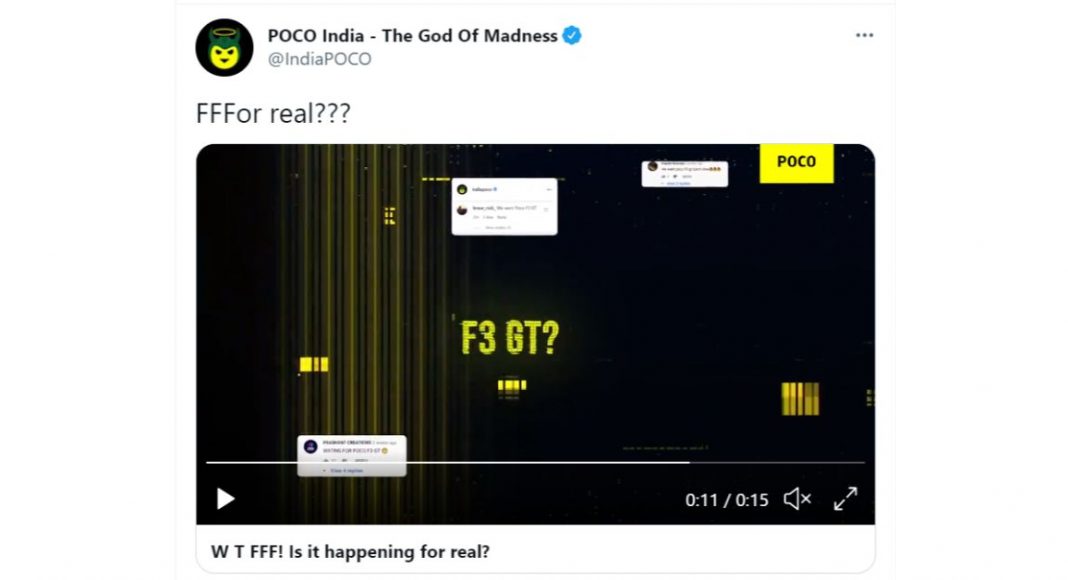 Yes, Poco today again teased the launch of its upcoming gaming smartphone Poco F3 GT. The launch of the device was earlier teased by a company’s executive who shared that the Poco F3 GT smartphone will be launched in India in the third quarter of 2021. The device is speculated to be a rebranded version of the Redmi K40 Game Enhanced Edition.

Whereas the latest video teaser released by the company falls in line with a recent report that tipped to launch the handset in the first 10 days of August. The company took to Twitter to roll out the teaser of the Poco F3 GT. The video teaser is 15 seconds long and it says that Q3 is here which indicates the upcoming launch. The phone is visible in restricted light against a brighter background. However, the outline of the device still shows a pair of gaming triggers on the right side of the frame. In the same way a side-mounted fingerprint sensor, the volume rocker is also seen clearly.

Previously in May this year Anuj Sharma, the Country Director of POCO India shared a 30-second video on Twitter that revealed that Poco F3 GT will be powered by MediaTek Dimensity 1200 SoC. He also revealed that the device will arrive in Q3 of 2021 which begins from July 1. Also reportedly the launch of the gaming smartphone will take place before August 10 in India.

As per the speculations, the Poco F3 GT will be a rebranded variant of the Redmi K40 Game Enhanced edition. If rumours are to be believed then the device could feature a 6.67-inch full-HD+ OLED display with a 120Hz refresh rate and HDR10+ support. It will run MIUI 12.5 on top of Android 11 and will be powered by a MediaTek Dimensity 1200 SoC with up to 12GB of LPDDR4x RAM and up to 256GB of UFS 3.1 storage. The phone will also come integrated with vapour chamber LiquidCool technology with white graphene for better cooling and extensive gaming.

For the photos and videos, the gaming smartphone by Poco will come with a  triple rear camera setup that will bring a 64-megapixel primary sensor with an f/1.65 aperture. Additionally, there will be an 8-megapixel secondary sensor and a  2-megapixel tertiary lens. Upfront there will be a 16-megapixel selfie shooter.

Besides this, there will be Wi-Fi, 5G, GPS, NFC, and a USB Type-C port as connectivity options. In addition to this, there will be a  side-mounted fingerprint scanner for authentication. The device will come with an IP53 rating for water and dust resistance. The smartphone will ship a 5,065mAh battery with support for 67W fast charging

Komila Singhhttp://www.gadgetbridge.com
Komila is one of the most spirited tech writers at Gadget Bridge. Always up for a new challenge, she is an expert at dissecting technology and getting to its core. She loves to tinker with new mobile phones, tablets and headphones.
Facebook
Twitter
WhatsApp
Linkedin
ReddIt
Email
Previous article
How to lock your keyboard and trackpad on your laptop for safety?
Next article
5 accessories every MacBook owner should have