Poco F3 GT scheduled to launch in India on July 23: Details Inside

The smartphone will come with a 10 Bit 120Hz AMOLED display offering 1.07 billion colours and HDR10+ support. 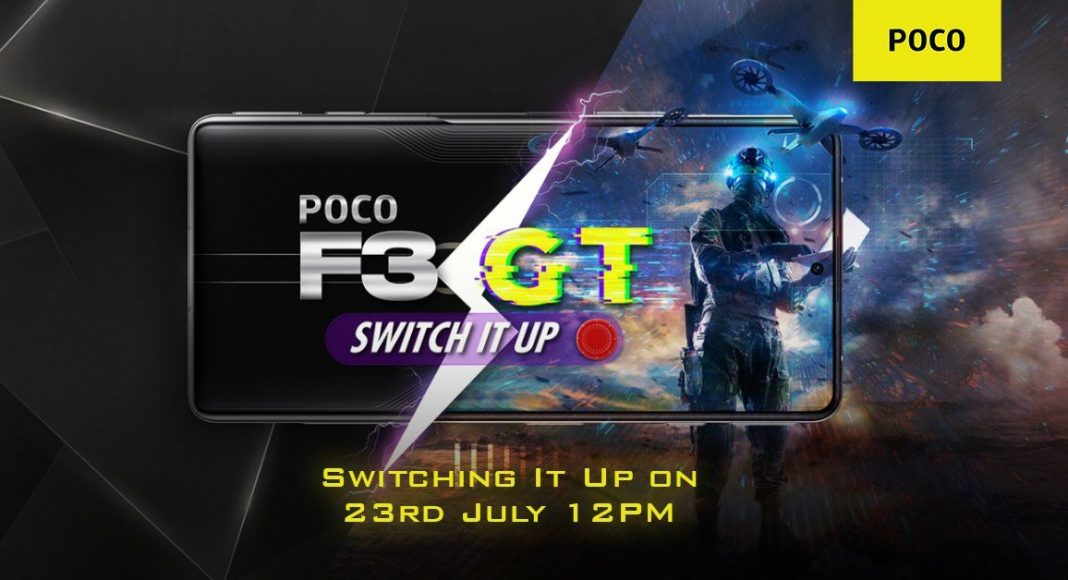 Poco F3 GT is scheduled to launch in India on July 23 at 12 noon. Poco is expected to host an online launch event to introduce the smartphone in the country. The Livestream details are yet to be announced however the event will be presented through the company’s social media channels including YouTube. Some of the previous reports suggest that the phone will be a rebranded Redmi K40 Gaming Edition that debuted in the Chinese market a few months ago.

Prior to the official launch, the company has confirmed some of the key features of the Poco F3 GT. The teasers suggest that the device will feature a slipstream design and anti-fingerprint matte finish. Additionally, the frames on the sides are made up of aerospace-grade aluminium alloy. There will be dual-stereo speakers and support for Dolby Atmos too.

Over that, the device will have GT Switch and Maglev Triggers for the best gaming experience. This allows you to game optimally using 4 fingers. It has been paired with shoulder buttons & tactile keys as well. Poco F3 GT will also bring a triple mic set up out of which one is a dedicated gaming mic. To tackle the heating issues while intensive gaming the company has provided vapour chamber cooling tech.

Speculations suggest that the gaming smartphone will be a rebranded variant of the Redmi K40 Game Enhanced edition. It might feature a 6.67-inch full-HD+ AMOLED display with a 120Hz refresh rate and HDR10+ support. Powered by a MediaTek Dimensity 1200 SoC the device will ship MIUI 12.5 on top of Android 11.

In terms of connectivity, it is most likely to bring  Wi-Fi, 5G, GPS, NFC, a USB Type-C port and more. In addition to this, there will be a  side-mounted fingerprint scanner for authentication. The device will come with an IP53 rating for water and dust resistance. The smartphone will ship a 5,065mAh battery with support for 67W fast charging.

Komila Singhhttp://www.gadgetbridge.com
Komila is one of the most spirited tech writers at Gadget Bridge. Always up for a new challenge, she is an expert at dissecting technology and getting to its core. She loves to tinker with new mobile phones, tablets and headphones.
Facebook
Twitter
WhatsApp
Linkedin
ReddIt
Email
Previous article
19 July 2021 Flipkart Daily Trivia Quiz Answers: Answer to win exciting prizes
Next article
OnePlus Nord 2 design revealed: Everything we know about from expected pricing and specifications