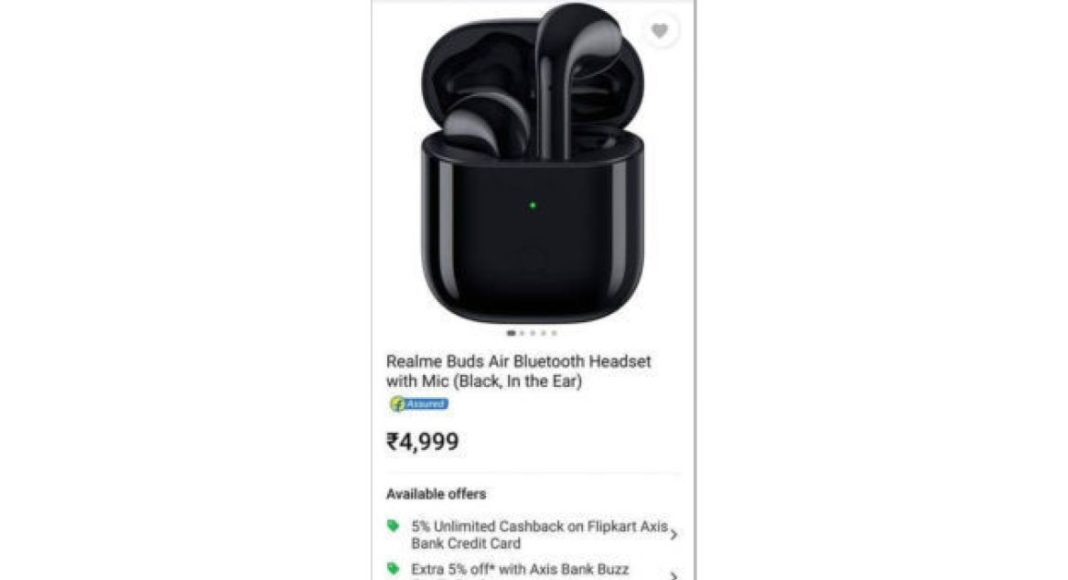 Realme is all set to launch its new smartphone Realme X2 730G in India. On the same day, the company will also be launching Realme Buds Air that looks exactly like Apple AirPods. Prior to its launch the price of Realme Buds mistakenly has been revealed via e-commerce website Flipkart. Both Realme X2 730G and Realme Buds Air will be officially introduced in the country on December 17.

The e-commerce website mistakenly listed Realme’s first-ever wireless earbuds Realme Buds Air. The wireless earbuds will make its debut on December 17 in India. As per the listing, which has already been taken down has been set at Rs 4,999. The wireless buds come with a periscope style design similar to Apple’s AirPods. Being an affordable option, the earbuds are going to come in bold colours like yellow, which is also the colour of the company’s logo.

Besides this, the listing displayed the Black colour option and also revealed the bank offers being offered during the purchase of the device via e-commerce platform. There will be 5 per cent unlimited cashback on Flipkart Axis Bank Credit Card also purchase made via Axis Bank Buzz Credit card will be offered 5 per cent additional off.

The Chinese smartphone manufacturer Realme has already launched Realme X2 730G in China few months ago in September. But there the company introduced the phone as Realme X2. So, we already know the specifications of the Realme X2 730G. The phone will be powered by an octa-core Qualcomm Snapdragon 730G SoC paired with 6GB and 8GB RAM options. The device will be offered in two storage options 64GB and 128GB of internal storage. The phone will be featuring 6.4-inch full-HD+ (1,080×2,340 pixels) Super AMOLED display with a 19.5:9 aspect ratio along with a waterdrop-style notch on the display. It will also include an in-display fingerprint sensor. There will be a 4,000mAh battery supported by 30W VOOC 4.0 Flash Charge technology.

As for the cameras, Realme X2 730G will be seen sporting quad rear camera set up comprising of a Samsung GW1 64-megapixel primary sensor with an f/1.8 aperture, an 8-megapixel wide-angle sensor with 119-degree field of view and f/2.25 aperture. There will a 2-megapixel depth sensor along with a 2-megapixel macro lens. For taking selfies there will be a 32-megapixel selfie camera on the front.

In terms of connectivity, there will be 4G LTE, Wi-Fi 802.11ac, Bluetooth v5.0, GPS/ A-GPS, NFC, USB Type-C, and a 3.5mm headphone jack. Whereas sensors on the phone include an accelerometer, ambient light, gyroscope, magnetometer and a proximity sensor.

Komila Singhhttp://www.gadgetbridge.com
Komila is one of the most spirited tech writers at Gadget Bridge. Always up for a new challenge, she is an expert at dissecting technology and getting to its core. She loves to tinker with new mobile phones, tablets and headphones.
Facebook
Twitter
WhatsApp
Linkedin
ReddIt
Email
Previous articleXiaomi Redmi K30 is going to launch today alongside RedmiBook 13: How to watch the Livestream details
Next articleFujifilm X-Pro3 mirrorless camera launched in India