Realme X50 Pro 5G with Snapdragon 865 chipset going to launch in India today: How to watch the live stream

The device is going to come with a dual-mode 5G support. 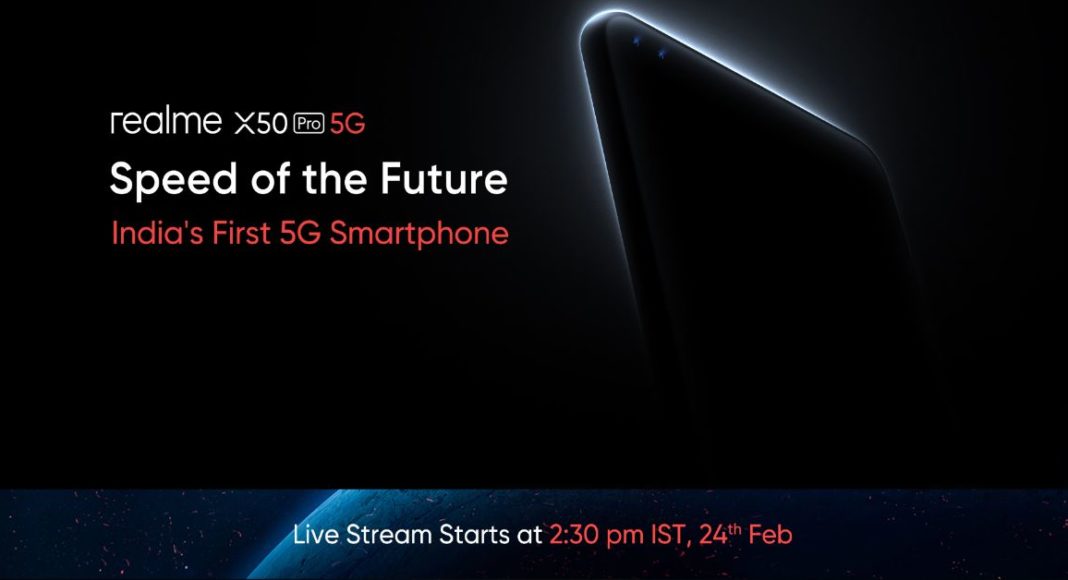 The wait is finally over, today India will be getting its first 5G smartphone from the Chinese company Realme. Today the company will be hosting a global launch of Realme X50 Pro 5G in the country. It was earlier planned to be unveiled at this year’s MWC trade show which was canceled due to the Coronavirus outbreak. The key highlights of the device include Snapdragon 865 chipset, a 90Hz Super AMOLED display along with a dual-mode 5G support. Read on to know more about the upcoming 5G mobile phone and its live streaming details.

Realme X50 Pro 5G expected pricing and how to watch the live stream:

The Realme X50 Pro 5G launch event is going to take place in New Delhi today. The event will begin at 2:30 pm IST and will also be live-streamed via the company’s official YouTube channel. Also, it is going to be broadcasted on different channels such as Twitter and the Realme India website. If you do not want to miss the live-action then you can watch it on our website as we have already embedded the link below.

According to a report, Realme X50 Pro 5G is going to be priced in India around Rs 50,000. However, its lower chipset version could be priced at Rs 25,790. Even though the 5G network is not available in the country Realme’s aim is to provide future-ready products to people to travel out of the country would be able to make use of the handset as the 5G network is already available in countries.

Not much has been revealed by the company with regard to the specifications of the Realme X50 Pro 5G. Even before its official launch, the company is teasing the phone on its event page. According to the teasers, the device will be powered by  Qualcomm’s Snapdragon 865 processor along with a dual-mode 5G support. The phone will be offered in two colour options Rust Red and Moss Green.

However, the company has not revealed the batter’s capacity but it is going to be supported by 65W SuperDart fast charging technology.

In terms of design Realme, X50 Pro 5G has been confirmed to feature a super AMOLED display with a 90Hz refresh rate. There is going to be a dual-hole punch that will be housing a dual ultra-wide selfie camera. Whereas on the rear it will be going will a vertically placed pill-shaped camera module that carries four cameras. The quad-camera set up will support the 20X digital zoom and a 64-megapixel primary camera sensor.

Komila Singhhttp://www.gadgetbridge.com
Komila is one of the most spirited tech writers at Gadget Bridge. Always up for a new challenge, she is an expert at dissecting technology and getting to its core. She loves to tinker with new mobile phones, tablets and headphones.
Facebook
Twitter
WhatsApp
Linkedin
ReddIt
Email
Previous article
Samsung Galaxy Z Flip pre-orders to start tomorrow via Samsung e-store
Next article
The live image of the OnePlus 8 Pro surfaced on the web showing quad rear camera setup