Redmi 10 Prime set to launch on September 3 in India, the company confirms

The device is speculated to be a rebranded variant of Redmi 10 that debuted last week globally. 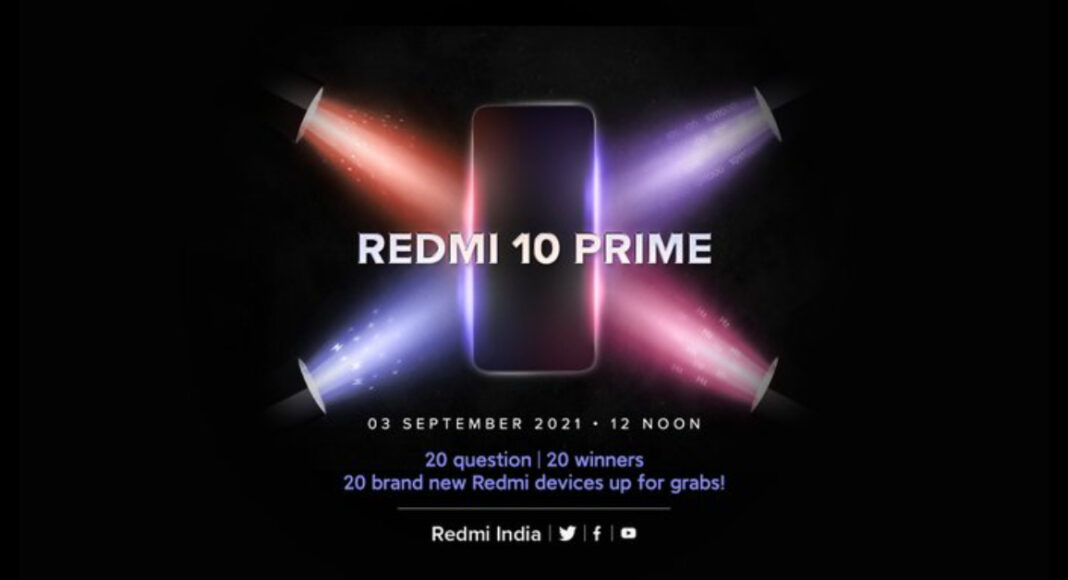 Xiaomi’s sub-brand, Redmi, has officially announced the launch of its new smartphone in India next month. The company itself confirmed to introduce the Redmi 10 Prime in the country on September 3. In addition to this, the company has also revealed the key features of the upcoming budget smartphone. The device is speculated to be a rebranded variant of Redmi 10 that debuted last month only.

Redmi 10 Prime launch in India is scheduled to happen on September 3. The company took to Twitter to confirm the launch date of the upcoming smartphone. Additionally, the Chinese smartphone brand has also teased the key specs of the handset, which includes a hole-punch display with an adaptive refresh rate. Moreover, the phone will also include dual microphones.

The device is said to be a rebranded variant of Redmi 10 as the model number spotted on the  Bluetooth Special Interest Group with a model number 21061119BI that is identical to the Redmi 10. So if that is to be believed then the Indian model will be priced around the global pricing of $179, which translates to Rs 13,300 for the 4GB RAM with 64GB storage. The 4GB RAM with 128GB storage was launched at $199, which comes to be around Rs 14,800 and the 6GB RAM with 128GB storage is priced at $199, which translates to Rs 16,600.

Speaking of the specification, the Redmi 10 Prime is likely to feature a 6.5-inch full-HD+ AdaptiveSync display with 1,080×2,400 pixels of resolution and up to 90Hz refresh rate. The phone is expected to be powered by an octa-core MediaTek Helio G88 SoC, and up to 6GB of RAM and 128GB of storage.

The phone may also come with a 3.5mm headphone jack and dual speakers along with a side-mounted fingerprint sensor and AI face unlock. It could boast a 5,000mAh battery with 18W fast charging.

Komila Singhhttp://www.gadgetbridge.com
Komila is one of the most spirited tech writers at Gadget Bridge. Always up for a new challenge, she is an expert at dissecting technology and getting to its core. She loves to tinker with new mobile phones, tablets and headphones.
Facebook
Twitter
WhatsApp
Linkedin
ReddIt
Email
Previous articleSamsung Galaxy M32 5G with a quad camera and Dimensity 720 SoC launched in India
Next articleFitbit Charge 5 fitness band with always-on display launched in India