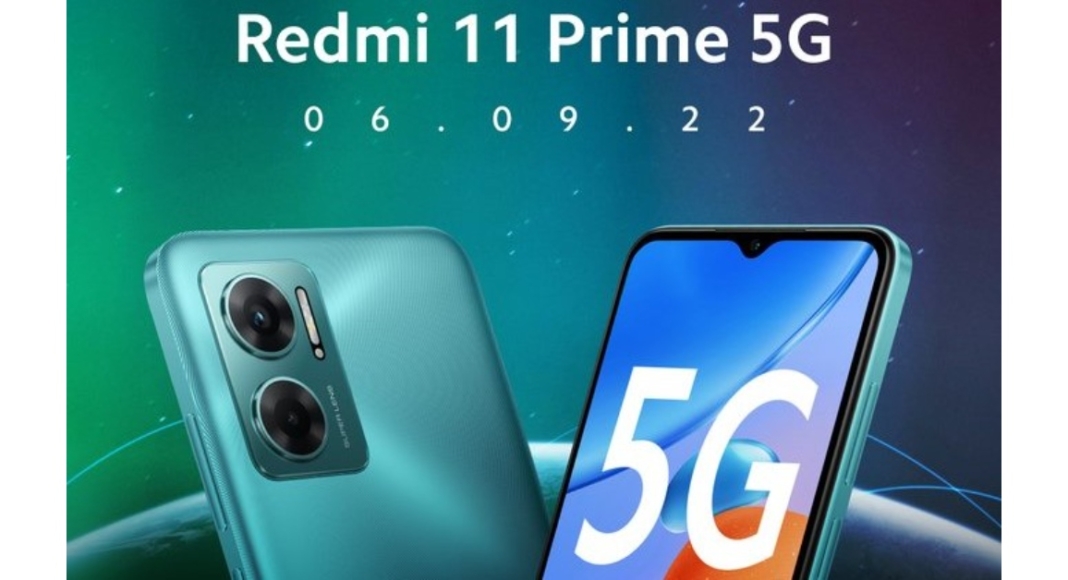 Redmi is all set to introduce a new smartphone in the Indian market. Xiaomi’s sub-brand has revealed that it is arriving with the Redmi 11 Prime 5G in India on September 6. Ahead of the official announcement, the company has disclosed some of its most important features. It is said to be powered by MediaTek Dimensity 700 SoC. Additionally, the phone will also have a 50-megapixel primary camera and a 5,000mAh battery.

Xiaomi announced that the Redmi 11 Prime 5G India launch date has been planned for September 6. Prior to the device’s introduction in the nation, a microsite was established for it and disclosed some of its most important features. The Redmi 11 Prime 5G’s additional features and price have not yet been disclosed by the firm in India. The smartphone will be released in at least two colour variations, according to the photographs Redmi provided on the homepage.

According to Redmi’s microsite, Redmi 11 Prime 5G’s display will include a teardrop-shaped notch to accommodate the selfie camera. A MediaTek Dimensity 700 SoC will power the upcoming phone. A 50-megapixel dual rear camera system with an LED flash will be featured on the smartphone. It will enable 5G connectivity with two SIM cards. The power button and volume rockers will be located on the right side of the frame.

The Redmi 11 Prime 5G, codenamed Light, was reportedly discovered in the IMEI database with the model number 1219I. A rebranded Redmi Note 11E known as the Poco M4 5G is thought to be the source of the smartphone. The smartphone was just discovered on the list of scheduled Xiaomi Security Updates.

Poco M5 on the other hand is also scheduled to launch in India a day before Redmi 11 Prime 5G launch which is September 5. The firm has not yet released information on the Poco M5’s specifications, features, or cost. According to a report, the Poco M5 may just cost Rs 15,000 in India. The entry-level model of the smartphone is said to be priced as above.

According to rumours, Android 12 is pre-installed. The phone reportedly sports a 6.58-inch LCD screen with full-HD+ resolution. It might be powered by a MediaTek Helio G99 SoC, as was already mentioned. The smartphone is said to include a 5,000mAh battery with at least 33W rapid charging capability. A Poco M5 model that supports 5G wireless technology may be made available in the future, according to rumours.

Komila Singhhttp://www.gadgetbridge.com
Komila is one of the most spirited tech writers at Gadget Bridge. Always up for a new challenge, she is an expert at dissecting technology and getting to its core. She loves to tinker with new mobile phones, tablets and headphones.
Facebook
Twitter
WhatsApp
Linkedin
ReddIt
Email
Previous articleAmazon Quiz Answers Today 31 August 2022: Participate to win Rs 2,500
Next articleGarena Free Fire Redeem Codes Today 31 August 2022: Here is how to claim them