Redmi A1 India launch to take place on September 6, alongside Redmi 11 Prime 5G

The smartphone will feature a dual rear camera setup and a 5,000mAh battery. 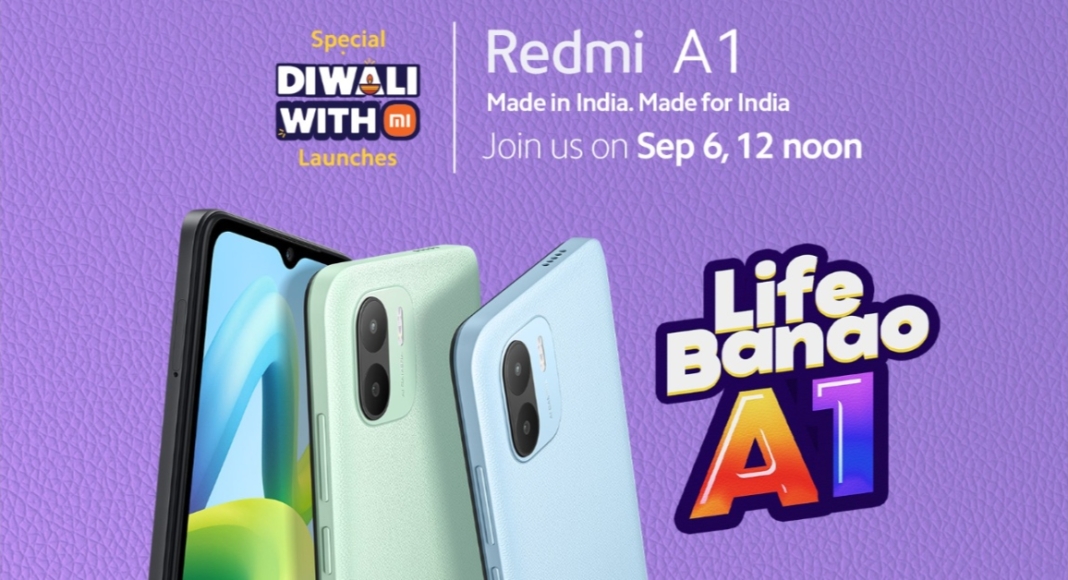 Redmi is all set for a new release in India. The company has announced that Redmi A1 will be launching in India on September 6. Ahead of the official release, a dedicated microsite has also been created highlighting the key features of the upcoming smartphone. The device is teased to have a dual rear camera arrangement and will pack a 5,000mAh battery. Moreover, the firm has not revealed the chipset’s name but it will be powered by a MediaTek processor.

The Redmi A1 will be unveiled as part of the “Diwali With Mi” releases, the company claims. The Redmi A1 will launch in India on September 6 at 12 noon. The device is set for a release alongside Redmi 11 Prime 5G which is also scheduled to launch on the same day.

In addition to this, a microsite specifically for the phone has been created on the business’ website, providing some details about the impending smartphone. A dual-back AI camera system with an LED flash will be featured on the Redmi A1. The handset’s back panel will have a leather texture. At least three colour variations will be available when the smartphone launches.

According to the microsite, a 5,000mAH battery will power the phone. A clean Android experience will be provided and the smartphone is revealed to come equipped with an undisclosed MediaTek SoC.

Other information, such as the future phone’s price in India, has not yet been disclosed by Redmi. According to reports, the phone’s Geekbench listing implied that it could have 3GB of RAM and ship with Android 12 preinstalled.

The Redmi A1 has been discovered on the US Federal Communications Commission (FCC) database and the Geekbench benchmarking website. It apparently had the model number 220733SL when it was listed in the US FCC database. A MediaTek Helio A22 SoC is expected to power the Redmi A1. Moreover, the Redmi A1 has also visited the database of the Bureau of Indian Standards. Model number 220733SI for the phone was discovered.

On the other hand, the business also disclosed that September 6 had been set aside for the Redmi 11 Prime 5G India launch. The display of the Redmi 11 Prime 5G will include a teardrop-shaped notch to make room for the selfie camera, according to Redmi’s microsite. The forthcoming phone will be powered by a MediaTek Dimensity 700 SoC. The smartphone will include a 50-megapixel dual rear camera system with an LED flash. With two SIM cards, 5G communication will be possible. On the right side of the frame, there will be a power button and volume rockers.

Komila Singhhttp://www.gadgetbridge.com
Komila is one of the most spirited tech writers at Gadget Bridge. Always up for a new challenge, she is an expert at dissecting technology and getting to its core. She loves to tinker with new mobile phones, tablets and headphones.
Facebook
Twitter
WhatsApp
Linkedin
ReddIt
Email
Previous articleGarena Free Fire Redeem Codes Today 3 September 2022: Here is how to claim them
Next articleXiaomi NoteBook Pro 120 Series laptops with 12th-gen Intel Core i5 H-series CPUs launched in India