The tech giant is also offering offers on several smartphones in Galaxy A, Galaxy M and Galaxy F series

Samsung Days sale is already live on its platform. The South Korean company is offering exciting deals and discounts on various smartphones including the latest Samsung Galaxy S21 series. The ongoing sale will last till April 19 so if you have plans to get any of the S21 smartphones and waiting for such offers and discounts now is the right time. Apart from this, you can also get discounts on other devices including the Galaxy A, M and F series of smartphones.

Samsung Days Sale has already kicked off and is live till April 19. Apart from Samsung’s online store, the sale is being held across various other online portals such as Amazon and Flipkart. In addition to this, it is accessible through the offline platform as well.

During the Samsung Days Sale, the customers can get discounts, deals and offers on the recently launched Samsung Galaxy S21 series, In addition to this, the mid-range smartphones from the Galaxy A, Galaxy M and Galaxy F series have also been put up on sale. We have listed below a few offers that you can easily avail of as the sale is going to end soon. 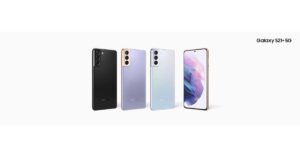 Samsung Galaxy S21 which retails at Rs 64,990 will be giving away a cashback of Rs 5,000, while Galaxy S21+ is offering a cashback of up to Rs 7,000. On the purchase of the Samsung Galaxy S21 Ultra, buyers can avail of up Rs 10,000 cashback. Noticeably the cashback is only available on the transactions made using HDFC Bank credit and debit cards as well as EMI transactions only. In addition to this, the company is also offering no-cost EMIs options starting at Rs 5,654.92 per month and on the exchange of old devices.

Those customers who are purchasing the Ultra variant can get either Galaxy Watch Active 2 (Aluminium variant) or Galaxy Buds Pro at Rs 990 only. Similarly, the same offers are being offered on other online and offline retailers including Amazon and Flipkart.

Komila Singhhttp://www.gadgetbridge.com
Komila is one of the most spirited tech writers at Gadget Bridge. Always up for a new challenge, she is an expert at dissecting technology and getting to its core. She loves to tinker with new mobile phones, tablets and headphones.
Facebook
Twitter
WhatsApp
Linkedin
ReddIt
Email
Previous article
April 17 Flipkart Daily Trivia Quiz Answers: Answer to win exciting prizes
Next article
Mi 11, M11 Pro, Mi 11i and Mi 11 Ultra storage variants tipped ahead of the India launch