The new smartphone boasts a 48-megapixel triple-camera array on the back, a 90Hz display, and 11 5G bands for enhanced connectivity. 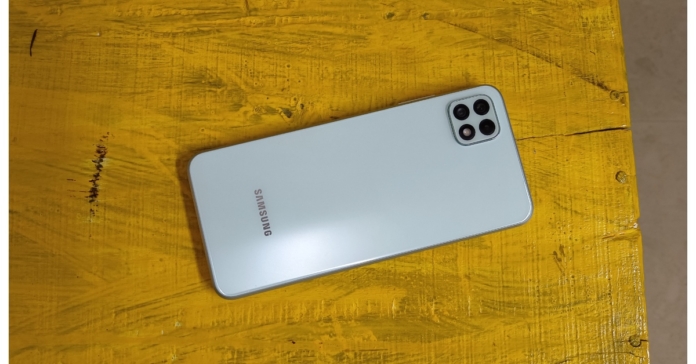 In this review, the device we’ll be talking about is part of Samsung’s A Series of smartphones, which looks stunning and places a strong emphasis on the camera. So yes, this is our long-term review of the Samsung Galaxy A22 5G. The new smartphone boasts a 48-megapixel triple-camera array on the back, a 90Hz display, and 11 5G bands for enhanced connectivity.

We were given the Mint colour choice during the evaluation, which looks excellent. Grey and violet colour options are very intriguing. We feel that the light colour option is the safest since it attracts fewer fingerprints and smudges. Aside from that, the design will appeal to you. It has a more premium appearance than the other smartphones in the F and M series. Despite the fact that the back and frame are made of plastic, the build quality is rather good. Our phone has developed some scrapes on the back over time, thus you should be extra cautious when using it or just place it in a cover to be safe. 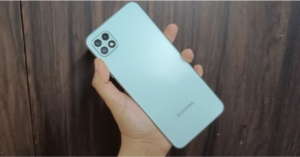 In addition, the 5G smartphone is light, weighing 203gms. As a result, this gadget lends itself well to one-handed use. As previously said, the smartphone’s design is appealing due to its distinct colour options and polish; otherwise, it has the same monotonous form factor that we have seen on practically all Samsung M, A, and F series handsets. Again, the standard triple camera sensors are placed inside a square module with a flashlight on the back. When it comes to the front, it sports hefty bezels and an old waterdrop notch. The chin area is relatively thicker than the bezels on the sides. 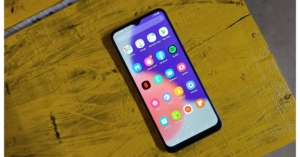 The edges are curved, and there is a power button and volume rocker on the right side of the frame. The fingerprint sensor is included as the power button works as an FP sensor, too. It is just at the ideal place for your fingers to reach and unlock the phone quickly.

We were unsatisfied with the display’s characteristics since, with its huge bezels and teardrop notch with FHD resolution, it already looked ancient. The Samsung Galaxy A22 5G does, indeed, have a 6.6-inch full-HD+ display with a refresh rate of 90Hz. We noted that the typography and app logos are less distinct when compared to the M32. However, due to its outstanding quality, many people will not be concerned. 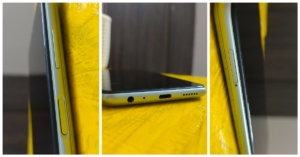 On the good side, the display’s colours are bright, and its touch sensitivity is superb, with a refresh rate of 90Hz (as said). So, you see, it’s not all that bad. The brightness is acceptable indoors, but it is less bright when used outside on a bright sunny day, and the ambient light sensor is slow.

When it comes to audio, the Galaxy A22 5G has a mono speaker that is not super loud, but decent enough for watching YouTube videos. Nevertheless, if you are a true audiophile, you will lose depth and lighter audio nuances.

We found the Galaxy A55 5G to be smooth and fast in terms of performance, due to the efficient octa-core MediaTek Dimensity 700 SoC. Multitasking between a few light apps is also feasible, and the company appears to have optimised programmes to load slightly faster in most cases. Furthermore, the phone’s refresh rate of 90Hz makes it as smooth as butter, with no micro lags.

You can play less demanding games, such as Call of Duty Mobile, on Medium graphics with high frame rate settings, but it can also play heavier games, such as Asphalt 9: Legends, effortlessly. We also had no heating concerns even after extended game sessions. 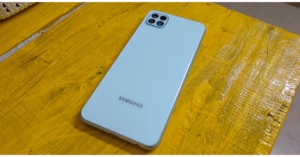 Moving on to the cameras, the Samsung Galaxy A22 5G has a triple rear camera arrangement with a 48-megapixel main sensor. A 5-megapixel ultra-wide-angle lens and a 2-megapixel depth sensor are also included. An 8-megapixel camera lens is positioned inside a notch in the front for snapping selfies. 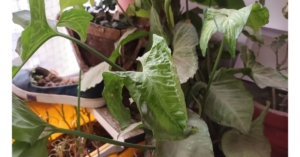 In most situations, the Galaxy A22 5G camera offers sharp and detailed images. While the ultra-wide shots are not outstanding since they lack details and seem darker than the primary images. We also believed its portrait photos were better since they were more natural and had better backdrop separation. 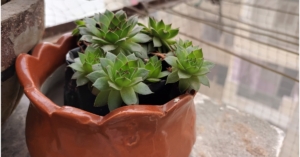 We did notice some problems with the selfie photographs, as they are not clear and seem mushy.

Evening or low-light images aren’t particularly good, however, the phone’s night mode can help to improve them marginally. The 2MP macro camera, on the other hand, is something the company needs to work on in future models.

The cameras of the Galaxy A22 5G can record videos in up to 2K resolution, and the footage is noticeably more stable.

Finally, the battery life on the Samsung Galaxy A22 5G is exceptional. It has very long endurance. Under high usage, we typically obtained more than 8 hours of screen time, which includes roughly an hour of gaming, viewing videos, browsing the web, and using social media applications. That works out to around a day and a half of endurance.

Charging the device, on the other hand, takes a lengthy time. While we have grown accustomed to lightning-fast charging, the Galaxy A22 5G only supports up to 15W of power only.

So that brings us to the end of our in-depth look at the Samsung Galaxy A22 5G (Rs 19,999). Do you want to buy the Samsung Galaxy A22 5G? It is a fantastic mid-range 5G ready phone in our opinion since it is beautifully optimised, can handle heavy gaming titles, and, most importantly, looks amazing. But if you are just looking for a cheaper 5G phone, there are some good ones in the market from the brand itself.

- Advertisment -
In this review, the device we'll be talking about is part of Samsung’s A Series of smartphones, which looks stunning and places a strong emphasis on the camera. So yes, this is our long-term review of the Samsung Galaxy A22 5G. The new smartphone...Komila SinghSamsung Galaxy A22 5G Long Term Review: Same design but still looks premium