The device was initially launched in Russia last month

Samsung has officially announced the launch of the Galaxy A32 in India. The company has expanded its popular A-Series with the launch of this device, which comes with an sAMOLED 90Hz display. Moreover, the device features a quad-camera setup, with a 64MP main camera along with the ultra-wide-angle lens, macro lens and depth camera. The smartphone is also backed by a 5,000mAh battery that offers up to 20 hours of video playback.

The Samsung Galaxy A32 has been introduced in India in a single configuration of 6GB RAM with 128GB storage. The price of the device is set at Rs 21,999. With this offering, the company aims to take on other companies offering smartphones at a similar price range. The mobile phone will be offered in distinct shades of Awesome Black, Awesome White, Awesome Blue, and Awesome Violet. It is scheduled to go on sale in the country from today onwards via Samsung.com, online portals and offline retailers.

On the purchase of the smartphone, the company will be offering an introductory offer in which the consumers can get cashback up to Rs 2,000 on HDFC Bank Credit Card, Debit Card and EMI transactions, making Galaxy A32 available at an effective price of Rs 19,999. Consumers can also avail of attractive No Cost EMI offers, with zero down payment and processing charges, across major banks and NBFC partners.

Samsung Galaxy A32 features a 6.4-inch full-HD Super AMOLED display with a 90Hz refresh rate panel, a peak brightness of up to 800 nits and a 20:9 aspect ratio. The phone runs One UI 3.1 on top of Android 11 and is powered by MediaTek Helio G80 SoC paired with 4GB of RAM with 64GB and 128GB of storage. For storing content the internal storage can be expanded up to 1TB via a microSD card. 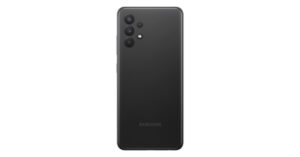 For photos and videos, the Samsung Galaxy A32 is endowed with a quad-camera setup that includes a 64-megapixel primary camera with  f/1.8 aperture, an 8-megapixel ultra-wide-angle lens with 123-degrees of FoV, a 5-megapixel macro sensor and a 2-megapixel depth sensor. For taking selfies, there is a 20-megapixel front-facing camera.

The phone is fuelled by a 5,000mAh battery with 15W fast charging that provides up to 20 hours of video playback, 93 hours of music playback and 19 hours of internet usage time. The device comes with an in-display fingerprint sensor along with an accelerometer, ambient light, gyroscope, magnetometer, and proximity sensor. In terms of connectivity, there is  4G LTE, Wi-Fi 802.11ac, Bluetooth v5, GPS/ A-GPS, NFC, USB Type-C, and a 3.5mm audio jack.

“With Galaxy A series, we are committed to bringing awesome innovations for everyone. Galaxy A32 continues the legacy and will strengthen our mid-range portfolio by providing new generation technology to all. Galaxy A32 has been designed keeping in mind the growing appetite for content consumption and expression of creativity among Gen Z and millennials. An all-rounder, packed with the best-in-segment 64MP quad-camera, real smooth 90Hz display along with long-lasting 5000mAh battery, Galaxy A32 is the ultimate choice for a generation that wishes to explore and excel at the same time,” said Aditya Babbar, Senior Director and Head, Mobile Marketing, Samsung India.

Komila Singhhttp://www.gadgetbridge.com
Komila is one of the most spirited tech writers at Gadget Bridge. Always up for a new challenge, she is an expert at dissecting technology and getting to its core. She loves to tinker with new mobile phones, tablets and headphones.
Facebook
Twitter
WhatsApp
Linkedin
ReddIt
Email
Previous article
Top 5 graphic cards you can buy under Rs 10,000 that will run the latest PC games
Next article
MediaTek launched MT9638 Chip, expected to ship with 4K Smart TV in Q2 2021