HomeMobilesSamsung Galaxy F41 to launch in India on October 8

Samsung Galaxy F41 to launch in India on October 8 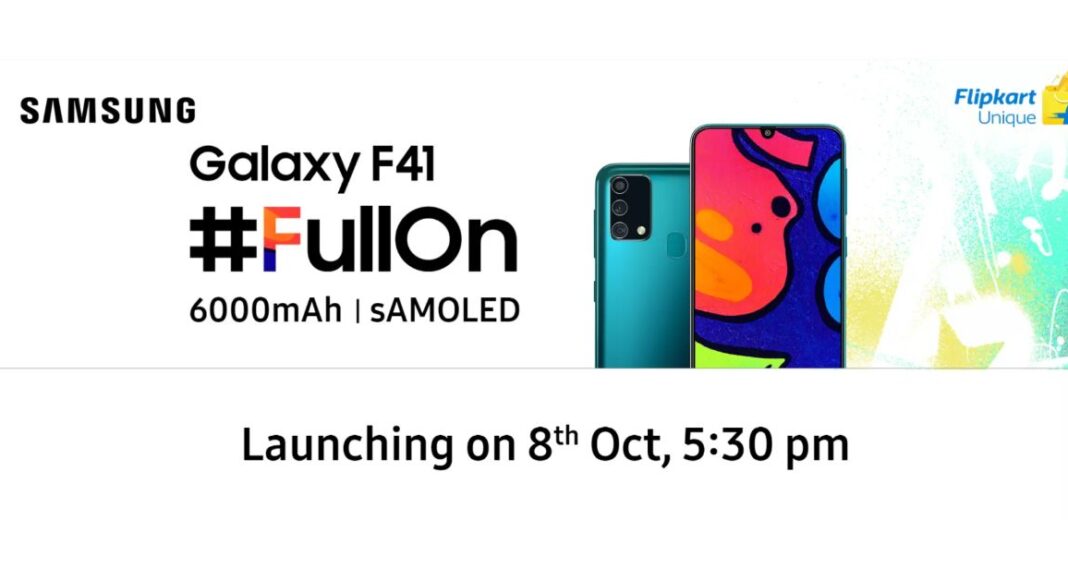 Soon the South Korean smartphone company Samsung is going to unleash its first F-Series smartphone in India. The company recently announced the arrival of its fresh new series via Twitter. At that time the company did not reveal the timeline as well as the name for the smartphone but today it has not only confirmed the exact launch date but also the name of its first smartphone in the series namely the Samsung Galaxy F41 which is now set for a launch on October 8 in India.

Samsung Galaxy F41 is the company’s first smartphone under its freshly announced ‘F series’ in the country. The device will launch in the country on October 8 at 5.30 PM. The launch date has been confirmed via a dedicated Flipkart teaser page for the phone which reveals that the company is going for a virtual launch event for the day. In addition to this, the microsite also confirms the key specs of the upcoming smartphone.

The company in its announcement said, “Galaxy F Series is crafted for a generation that lives a colourful life without limits and compromises. It unlocks the fun of exploring, expressing and indulging without limits for the young Indian shoppers. Galaxy F41 will be the first smartphone to launch in the F Series. With Galaxy F41, consumers will get a ‘full on’ experience of every aspect of a smartphone that matters to them. Galaxy F41 will come with a fantastic display, forceful battery and fabulous looks, leading to ‘full on’ experiences whether it is movies, games, music or entertainment. Galaxy F41 will make its global debut at the ‘Full On Festival’, scheduled for October 8. The ‘Full On Festival’ will be streamed online. It will bring out the F Series proposition of ‘Full on’ entertainment alive! Watch out Samsung and Flipkart handles to know more & register for the “Full On Festival”

Samsung Galaxy F41 will feature a massive 6,000mAh battery and a Super AMOLED Infinity-U display with sleek bezels on the sides. Moreover, it will also sport a triple rear camera setup and a rear-mounted fingerprint scanner. As of now the official information regarding the smartphone is very scarce but recently the device was spotted on Geekbench. The benchmarking listing has revealed that the smartphone will be powered by Exynos 9611 processor with 6GB of RAM. The device is said to run Android 10.

What is more, not long ago a tipster Ishan Agarwal shared the schematics of the upcoming smartphone bearing model number SM-F415F with the tagline “Full On!”. The device is said to include a water drop-style notch to house a selfie camera. While the SIM card slot is positioned on the left edge and on the right volume button and the power key is given. At the bottom, a USB Type C port, and a 3.5mm audio jack is seen whereas on the back of the phone the device will carry a triple camera setup with a flashlight along with a rear-mounted fingerprint scanner. Moreover, he also revealed that F41 will be offered in three colour options black, and green and will be available in two storage options.

Besides this Gizmochina reports the Galaxy F41 is likely to be a rebadged variant of Galaxy M31 that may arrive with improved cameras.

Komila Singhhttp://www.gadgetbridge.com
Komila is one of the most spirited tech writers at Gadget Bridge. Always up for a new challenge, she is an expert at dissecting technology and getting to its core. She loves to tinker with new mobile phones, tablets and headphones.
Facebook
Twitter
WhatsApp
Linkedin
ReddIt
Email
Previous articleDell launches its new G7 15 gaming laptop in India
Next articleLG expands its 2020 K series lineup: Here’s what you should know