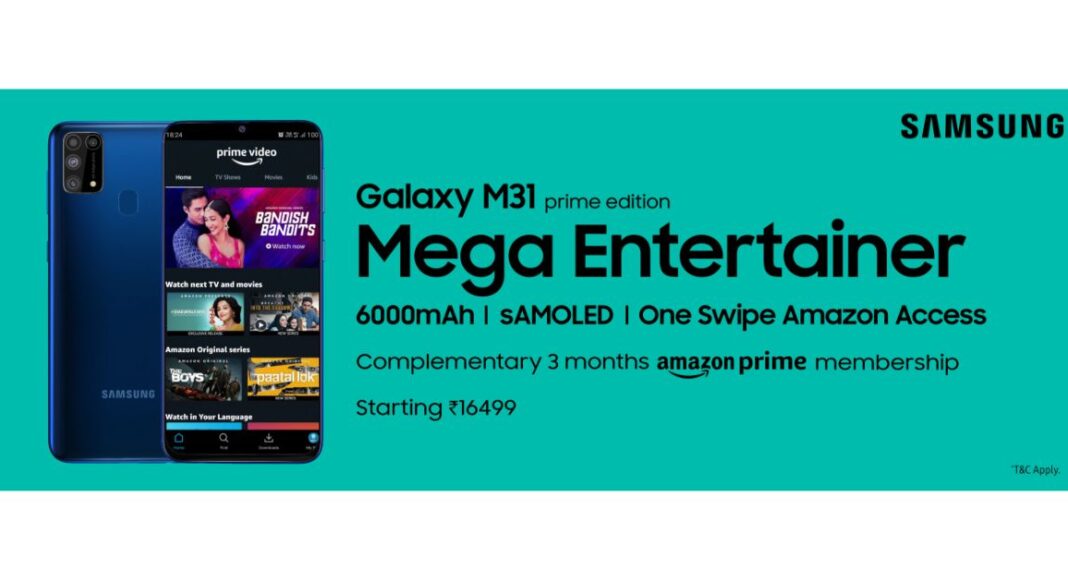 Recently, the South Korean technology giant Samsung launched its Galaxy M31s smartphone in India at a starting price of Rs 19,499. Today the company has launched another new smartphone called Samsung Galaxy M31 Prime expanding its M-series portfolio. This is the company’s special edition smartphone jointly developed with Amazon.in for consumers this festive season. The device comes integrated with some of the most popular Amazon ecosystem apps along with a complimentary 3-month Prime membership for users to get unlimited free fast delivery, millions of hours of Prime Video content, Ad-free music streaming and hosts of Amazon Prime benefits.

Samsung Galaxy M31 Prime’s price in India has been set at Rs 16,499 for the 6GB RAM with a 128GB storage model. The company will be offering the smartphone in multiple colour options — Ocean Blue, Space Black and a new colour called Iceberg Blue. The device will go on sale when the Amazon Great Indian Festival sale kicks off on October 17 for the regular members and for the Prime member on October 16. 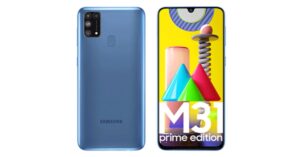 During the sale, the company will be offering Rs 1,000 Amazon Pay cashback to the Prime member on October 16 applicable to all the prepaid orders. Moreover, there will be an additional 10 percent instant cashback on HDFC card payments. The phone will also be accessible via Samsung.com and select retail stores in the country.

Samsung Galaxy M31 Prime features a 6.4-inch full-HD+ Infinity-U sAMOLED Display. The phone runs on One UI 2.1 based on top of Android 10. Under the hood, there will be an octa-core Exynos 9611 chipset paired with 6GB of RAM and 128GB of onboard storage. For more storage, there is an option to expand the internal storage using a microSD card to up to 512GB.

For taking photos and videos, Samsung Galaxy M31 Prime carries a quad rear camera setup consisting of a 64-megapixel primary sensor. Further assisted by an 8-megapixel Ultra-Wide camera with a 123-degree field of view, a 5-megapixel macro lens for taking close-up shots of objects and a 5-megapixel depth sensor for taking portrait shots with live focus. It can also record 4K videos and shoot in hyper-lapse, slow-mo and super-steady modes. Besides, it has a dedicated night mode for great low light photography. While on the front the phone sports a 32-megapixel selfie camera which also supports 4k video recording and slow-mo selfies.

Apart from this, the device packs a massive 6,000mAh battery along with a Type C 15W fast charger out of the box. It is touted to offer uninterrupted video playback of up to 26 hours. Galaxy M31 Prime users also get a pre-installed dedicated folder, containing some of the most popular Amazon ecosystem apps such as Amazon Shopping, Amazon Prime Video, Amazon Prime Music, Kindle and Audible.

Commenting on the launch, Samsung India’s Sandeep Singh Arora, Senior Director, said that “Galaxy M31 has been a consistent best-seller on Amazon as our young millennial and Gen Z consumers loved its monster features. For Galaxy M31 Prime, we worked closely with Amazon to add new features that enrich user experiences. Galaxy M31 Prime is a great example of Samsung’s technology prowess and Amazon’s suite of prime offerings designed to give consumers the best of entertainment and shopping experiences. With Galaxy M31 Prime, consumers will get a truly Mega Entertainer smartphone this festive season.”

Komila Singhhttp://www.gadgetbridge.com
Komila is one of the most spirited tech writers at Gadget Bridge. Always up for a new challenge, she is an expert at dissecting technology and getting to its core. She loves to tinker with new mobile phones, tablets and headphones.
Facebook
Twitter
WhatsApp
Linkedin
ReddIt
Email
Previous articleComparison: iPhone 12 Pro Vs iPhone 12 Pro Max Vs iPhone 11 Pro Max
Next articleSamsung India announces exciting festive season offers online consumers