Here is how to watch the Livestream of the Samsung Galaxy M33 5G India launch. 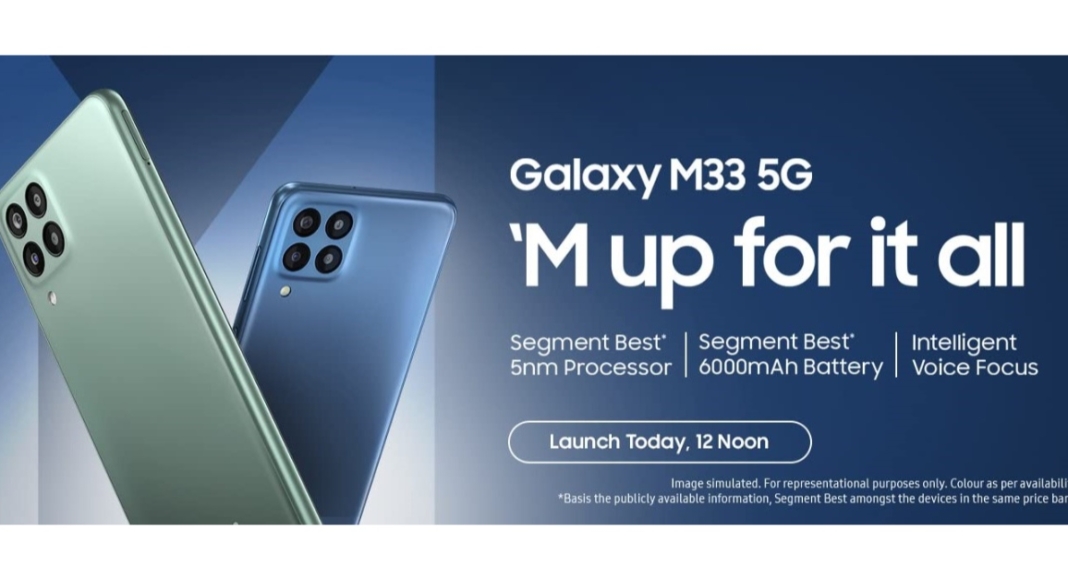 Samsung Galaxy M33 5G India launch is all set to take place today. As the name suggests the smartphone will come with 5G connectivity. There will be a quad rear camera set up, a 120Hz LCD display and a 6,000mAh battery with 25W charging support. The handset also comes pre-installed with Android 12.

Samsung Galaxy M33 5G India launch is scheduled to take place today at 12 noon. The event will be broadcast live on the company’s official social media channels and YouTube.

The smartphone has also been listed on the Amazon India website to tease its availability and highlight its key features. Keen customers can sign up for an alert when the mobile phone goes up for sale by clicking the ‘Notify Me’ button on the e-commerce platform.

The Samsung Galaxy M33 5G will be available in two colours: blue and green, according to the dedicated microsite. A USB Type-C port and a 3.5mm headphone jack will be included on the phone. A fingerprint scanner can also be seen on the right side of the frame.

A 6,000mAh battery powers the Galaxy M33 5G, which also has a fingerprint sensor on the side. Onboard sensors include an accelerometer, gyroscope, ambient light sensor, and proximity sensor.

Komila Singhhttp://www.gadgetbridge.com
Komila is one of the most spirited tech writers at Gadget Bridge. Always up for a new challenge, she is an expert at dissecting technology and getting to its core. She loves to tinker with new mobile phones, tablets and headphones.
Facebook
Twitter
WhatsApp
Linkedin
ReddIt
Email
Previous articleAmazon Quiz Answers Today 2 April 2022: Participate to win Rs 15,000
Next articleSamsung Galaxy M33 5G with 6,000mAh battery and 120Hz display launched in India