Samsung Galaxy M33 5G set to launch in India on April 2: What to expect

The device has also been listed on Amazon which reveals a 6,000mAh battery onboard. 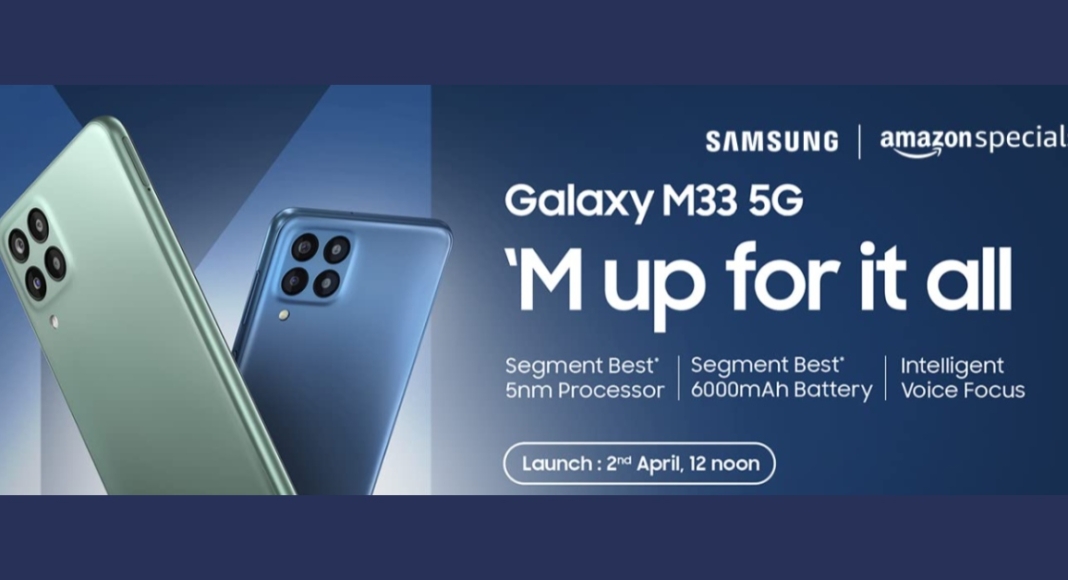 After the successful launch of the Samsung Galaxy A53 5G in India Samsung is all set to introduce another 5G smartphone in the country under its popular M-Series. The Samsung Galaxy M33 5G India launch is now set for April 2.

The company has confirmed this through an Amazon listing. The device will feature a quad rear camera set up, a 120Hz LCD display and a 6,000mAh battery. The handset also comes pre-installed with Android 12. The phone was announced earlier this month along with other A-Series smartphones.

Samsung Galaxy M33 5G India launch is scheduled to take place on April 2 at 12 noon. The smartphone has also been listed on the Amazon India website to tease its availability and highlight its key features. Keen customers can sign up for an alert when the mobile phone goes up for sale by clicking the ‘Notify Me’ button on the e-commerce platform.

The dedicated microsite indicates that the Samsung Galaxy M33 5G will be available in two colours: blue and green. The phone will also have a USB Type-C port and a 3.5mm headphone jack. On the right side of the frame, a fingerprint scanner is also visible.

Furthermore, the listing reveals the phone will come with a 6,000mAh battery and 25W fast charging support. The smartphone will be offered in two different configurations: 6GB RAM with 128GB storage and 8GB RAM with 128GB memory options. According to an Amazon listing Galaxy M33 5G will feature a quad rear camera setup.

The Samsung Galaxy M33 5G has a 6.6-inch TFT Infinity-V full-HD+ display with a resolution of 1,080,408 pixels. The refresh rate of the screen is 120Hz. The phone will also be powered by OneUI 4.1, which is based on Android 12. There is an unknown octa-core SoC with up to 8GB of RAM and 128GB of storage under the hood.

The Galaxy M33 5G has a 6,000mAh battery and a fingerprint sensor on the side. An accelerometer, gyroscope, ambient light sensor, and proximity sensor are among the onboard sensors.

Komila Singhhttp://www.gadgetbridge.com
Komila is one of the most spirited tech writers at Gadget Bridge. Always up for a new challenge, she is an expert at dissecting technology and getting to its core. She loves to tinker with new mobile phones, tablets and headphones.
Facebook
Twitter
WhatsApp
Linkedin
ReddIt
Email
Previous articlePoco X4 Pro 5G India Launch today: Here is how to watch the launch event live
Next articleWhat Is Facebook Touch and Is It Worth Using?