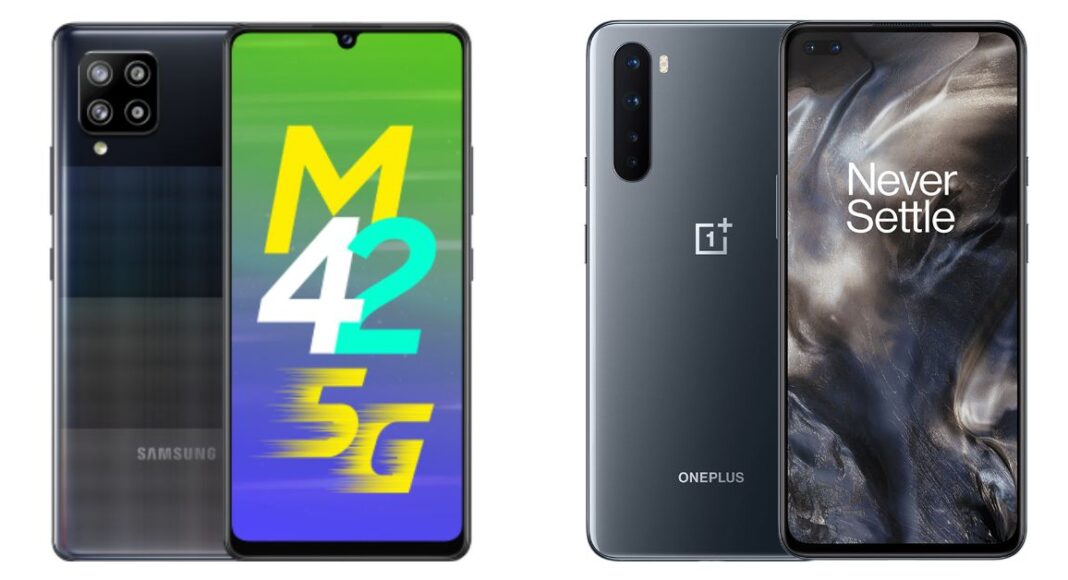 Today in India, Samsung introduced its first 5G smartphone in its Galaxy M range. The company has launched Samsung Galaxy M42 5G that is powered by Qualcomm Snapdragon 750G processor. The phone also includes a waterdrop-style notch display and a quad-camera setup. The device is put up against the OnePlus Nord in the mid-range price segment. So today we have compared both these smartphones in order to highlight the differences and similarities between them. Our comparison of Samsung Galaxy M42 5G Vs OnePlus Nord will surely ease out the choice for you.

Samsung Galaxy M42 5G: 48-megapixel GM2 primary sensor. In addition to this, there is a secondary 8-megapixel ultra-wide-angle lens, a 5-megapixel macro sensor, and a 5-megapixel depth sensor.

OnePlus Nord: Sony IMX586 48-megapixel primary sensor with an f/1.75 aperture along with optical image stabilisation (OIS). In addition to this, there is a secondary 8-megapixel ultra-wide-angle lens with a field of view (FoV) of 119 degrees and f/2.25 aperture. It also has a 2-megapixel and a 5-megapixel macro and a depth sensor with f/2.4 aperture

We have compared all the specs of both smartphones. Firstly, the more storage capacity you have the more you will be able to use it to store pictures, apps, videos etc which OnePlus Nord does not offer. It comes in a single storage option only, whereas M42 offers 128GB of inbuilt storage with expansion options. The OnePlus smartphone has no external memory card support compared with Samsung. In addition to this Galaxy M42 5G comes with a bigger battery capacity than its challenger.

On the flipside, Nord offers a sharper and crisper screen as it has 1,080×2,400 pixels of resolution whereas its opponent comes with 720×1600 pixels of resolution. Although both of these phones have a similar rear camera set up, OnePlus Nord offers dual front cameras for selfies. So in the end what matters the most is which phone out of the two offers the best features at the best pricing and in this case Samsung Galaxy M42 5G sweeps the board as it is priced less than OnePlus Nord. And most importantly Samsung is right now offering it an introductory price of Rs 19,999. So, that is our pick out of the two.

Komila Singhhttp://www.gadgetbridge.com
Komila is one of the most spirited tech writers at Gadget Bridge. Always up for a new challenge, she is an expert at dissecting technology and getting to its core. She loves to tinker with new mobile phones, tablets and headphones.
Facebook
Twitter
WhatsApp
Linkedin
ReddIt
Email
Previous article
How can you block websites from asking to send notifications on Chrome, Firefox, and Edge?
Next article
April 29 Flipkart Daily Trivia Quiz Answers: Answer to win LG Washing Machine