This smartphone will be available on Amazon.in, Samsung.com, and select retail stores starting September 18, 2020. 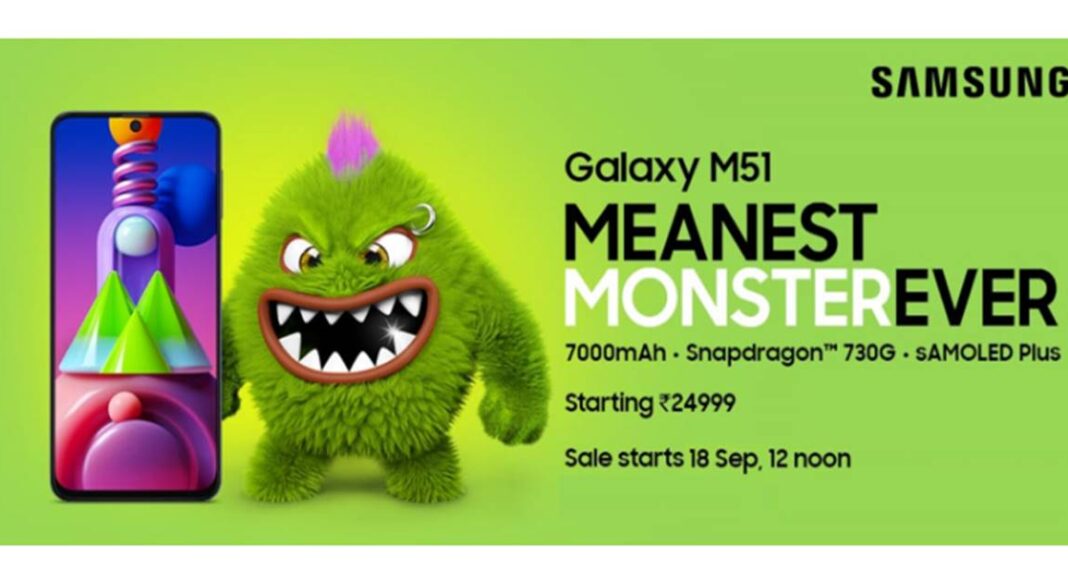 Samsung Galaxy M51 has been finally launched in India as the South Korea-based tech giant’s most powerful and premium M Series smartphone for the tech-savvy millennial and Gen Z consumers. Powered by Qualcomm Snapdragon 730G, Galaxy M51 is India’s first smartphone with a 7000mAh battery. This handset comes in two variant:

The Galaxy M51 smartphone, which has been showcased in Electric Blue and Celestial Black colours, will be available on Amazon.in, Samsung.com, and select retail stores starting September 18, 2020.

This much-awaited handset comes with a 6.7-inch Super AMOLED Plus Infinity-O display and Sony 64MP Quad Camera, making it the ‘meanest monster ever’ in Samsung’s M series portfolio.

“Galaxy M51 is the latest and the most powerful of all the M series models launched ever. With the only 7000mAh battery industry-wide, and the host of other spectacular features, the Galaxy M51 rightfully lays claims to its marketing campaign tagline of the “Meanest Monster Ever,” said Asim Warsi, Senior Vice President, Samsung India.

With the Galaxy M51, Samsung is taking its monster battery proposition to a whole new level. Samsung Galaxy M51 is India’s first smartphone with a 7000mAh battery. According to Samsung, “It’s an industry-leading innovation that’s tailor-made for Indian millennials who are increasingly spending more time on their mobile device.”

As far as the display is concerned, the Galaxy M51 comes with a 6.7-inch Super AMOLED Plus Infinity-O display for uninterrupted and immersive viewing experience. The display on Galaxy M51 is up to 13 percent thinner and weighs up to 12 percent lesser than conventional Super AMOLED panels. As a result, Galaxy M51 is surprisingly slim at 9.5 mm and weighs just 213 grams even as it packs in a 7000mAh battery. The handset’s Super-AMOLED Plus panel helps display a wide range of colours with an incredible degree of clarity and also consumes less power.

On the camera front, Samsung Galaxy M51 sports a quad-camera setup, with a 64MP main Sony IMX 682 sensor. The 12MP Ultra-Wide lens on Galaxy M51 has a 123-degree field of view for capturing the world as you see it, while the dedicated 5MP Macro lens does a great job of capturing close-up shots. Galaxy M51’s 5MP depth lens takes amazing portrait shots with live focus. The handset supports 4K recording and it supports hyper-lapse, slow-mo, and super-steady modes. The Galaxy M51’s 32MP front camera also supports 4K video recording and slow-mo selfies. It has powerful camera hardware with Intelli-Cam features such as ‘Single Take’ to elevate the camera experience to a whole new level.

Samsung has also revealed an introductory launch offer on Amazon.in that would be available from September 18 to September 20, 2020, on Amazon.in. Customers using HDFC credit and debit cards would get up to Rs 2,000 instant cashback on both EMI and non-EMI transactions when they purchase the Galaxy M51.