The device will be available through Amazon in the country. 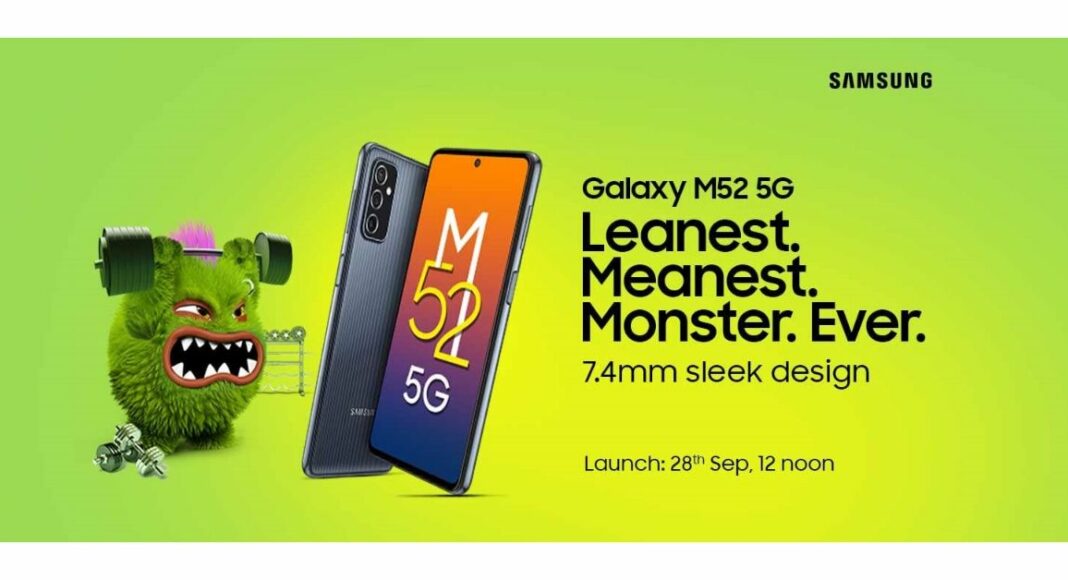 The South Korean smartphone manufacturer today announced to launch Samsung Galaxy M52 5G in India on September 28. The previous week, the company confirmed the existence of the new M-Series phone by listing it on Amazon.

The announcement comes just ahead of the upcoming Great India Festival Sale. It should be noted that the launch was earlier teased to happen on September 19, which happens to be an error.

Samsung took to Twitter to make the announcement that Samsung Galaxy M52 5G India launch is now scheduled to take place on September 28 instead of September 19.

The phone will be introduced on Amazon at 12 noon and is expected to be available for shopping on the same day of the launch or it might be available during the Great India Festival sale.

As per the listing, the Galaxy M52 5G will carry a 7.4mm sleek design. In addition to this, there will be a triple rear camera set up and stripe design on the back panel.

The black colour variant of the Galaxy M-Series phone is now being teased but devices according to leaked renders the phone may come in two more colour options- blue and white.

The leaked renders also revealed a small notch at the top centre of the front display. There will be a side-mounted fingerprint sensor that also doubles up as a power button and a volume up/down key.

Besides this Samsung Galaxy M52 5G is speculated to feature a 6.7-inch full-HD+Super AMOLED display with 1,080×2,400 pixels of resolution and 120Hz refresh rate support. The screen could also have Corning Gorilla Glass 5 protection.

It will run on One UI 3.1 based on top of Android 11. The device is likely to be powered by an octa-core Qualcomm Snapdragon 778G SoC with 6GB and 8GB RAM options paired with 128GB of internal storage.

For the optics, Galaxy M52 5G will feature a triple rear camera set up. The system is expected to house a 64-megapixel primary sensor, a 12-megapixel wide-angle lens and a 5-megapixel macro camera.

Upfront it is rumoured to come with a  32-megapixel front-facing camera for taking selfies and video calling.

On the connectivity front, the phone may include a 5G, 4G LTE, Wi-Fi, Bluetooth v5, GPS/ A-GPS, and a USB Type-C port. The Samsung M52 is expected to have 164x76x7mm dimensions and will weigh approximately 175 grams.

In terms of pricing Samsung Galaxy M52, 5G is listed to come with a price tag of PLN 1,749 that translates to Rs 32,900 for the 8GB RAM with 128GB storage options. According to the Polish retailer’s website, the 5G smartphone is likely to be available in Black, Blue, and White colour options.

Komila Singhhttp://www.gadgetbridge.com
Komila is one of the most spirited tech writers at Gadget Bridge. Always up for a new challenge, she is an expert at dissecting technology and getting to its core. She loves to tinker with new mobile phones, tablets and headphones.
Facebook
Twitter
WhatsApp
Linkedin
ReddIt
Email
Previous articleiQoo Z5 India launch teased, gets listed on Amazon
Next articleHow to watch NBA games online in India