The device will run on Samsung Galaxy S20 FE 5G

Samsung Galaxy S20 FE 5G is set to get launched on September 23. Ahead of its official launch, the device has appeared several times on the internet revealing its key specs. Recently it was briefly listed on the company’s website and was also discovered on TENAA tipped to sport a 120Hz refresh rate panel. Those unaware this device is the toned-down variant of the Galaxy S20 smartphone and as the launch is coming closer the leaks have gathered momentum. In a new development, live images of the smartphone have now surfaced on the web along with its key specification.

Tipster Jimmy is Promo via its Twitter handle has shared some of the exclusive live images of the Samsung Galaxy S20 FE revealing the front as well as the back-design aspects of the upcoming smartphone. The hands-on images suggest a flat display with sleek bezels. While the back of the phone suggests a triple rear camera setup similar to its sibling donning a greyish black colour finish along with all the physical buttons positioned at the right side of the device. Alongside the images, the tipster has also shared key specifications of the S20 FE. However, the company has not yet revealed the name of the smartphone but the leaked images have confirmed that it will be called Samsung Galaxy S20 FE 5G that will run One UI 2.5 on top of Android 10. 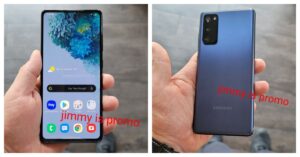 It is tipped to carry a 6.5-inch full-HD+ display with 120Hz refresh rate support. The upcoming phone is IP68 certified for dust and water resistance. The rear camera set up will support 3x optical zoom and 10x digital zoom and the selfie camera is said to have a resolution of 32-megapixel positioned inside a punch-hole design display.

Recently the device was also spotted on the South Korean company’s German website which showed the front as well as the back of the phone bearing the model number SM-G7818/DS. It features a hole-punch display akin to the S20 series. In a similar way, the device was also spotted on the Philippines website suggesting Cloud Navy and Cloud Lavendar colour options. Moreover, it also revealed that the phone will be offered with 128GB of storage option. Later on, it was listed on the Chinese regulatory website TENAA also on NBTC suggesting a 6.5-inch display and 4,500mAh battery with 15W wired charging support.

Previous reports claim that Samsung Galaxy S20 FE will have a 6.5-inch full-HD Super AMOLED display featuring a 120Hz refresh rate and an in-display sensor. It is expected to be powered by Snapdragon 865 SoC for 5G support whereas the 4G variant will have Exynos 990 SoC paired with 6GB of RAM. For the optics, there will be a triple rear camera set up on the phone speculated to have dual 12-megapixel sensors and an 8-megapixel camera. While on the front is most likely to have a 32-megapixel selfie camera. It is speculated to pack a 4,500mAh battery along with a 15W fast charger.

Komila Singhhttp://www.gadgetbridge.com
Komila is one of the most spirited tech writers at Gadget Bridge. Always up for a new challenge, she is an expert at dissecting technology and getting to its core. She loves to tinker with new mobile phones, tablets and headphones.
Facebook
Twitter
WhatsApp
Linkedin
ReddIt
Email
Previous articleDisney+ Hotstar now offering an additional 1-month subscription to their VIP annual new subscriber, valid for IPL 2020 opening weekend
Next articleApple to unveil its online store in India on September 23

A look at the top air purifiers to buy before the...

Vipul Chandwani - Oct 18, 2021 0
Pollution is increasing in our country day by day. Not only is it affecting the lives of people but having a great impact on...