The 4G variant has already been launched in India last year 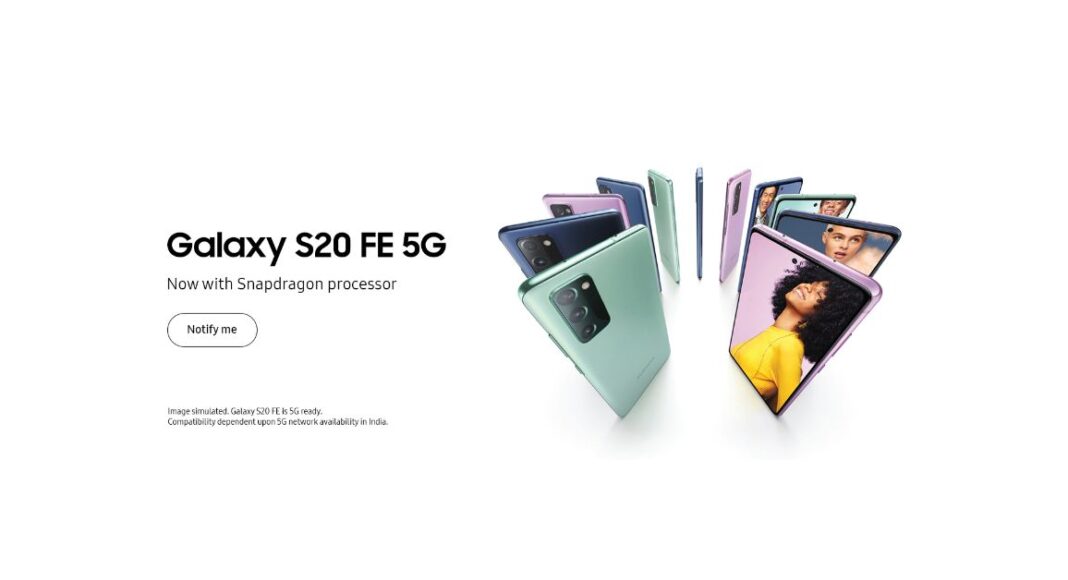 Last year Samsung Galaxy S20 FE was launched with Exynos 990 SoC but both 4G and 5G variants were introduced in the US. Today the 5G variant, which is powered by the latest Snapdragon 865 SoC is going to launch in India.

Last week the support page for Samsung Galaxy S20 FE 5G went live on the Samsung India website suggesting an imminent India launch. In addition to this, the device was also spotted on the Bureau of Indian Standards (BIS) certification site. Soon after this, the registration page of the phone went live on its official website with a ‘notify me’ button.

Samsung took to Twitter to officially announce the arrival of the Samsung Galaxy S20 FE 5G India launch. The company has confirmed that the launch is set for March 30 that is today. The device is also slated to go on sale on the same day. A registration page of the phone is also up so those who are interested in buying the 5G phone can register on the Samsung India website with a ‘notify me’ button.

As for the pricing, the company has not revealed the price of the smartphone yet. Back in September last year it introduced the 5G variant of the  Samsung Galaxy S20 FE in three different configurations: 6GB RAM with 128GB, 8GB with 128GB, and 8GB with 256GB models priced at $699 that translates to Rs 51,400.

In terms of specifications, the Galaxy S20 FE 5G is going to feature a similar 6.5-inch Infinity-O Super AMOLED display with 1,080×2,400 pixels of resolution as of the 4G variant. The panel will support up to 120Hz refresh rate and a 20:9 aspect ratio with a pixel density of 407ppi, protected with a layer of Corning Gorilla Glass 3. Under the hood, there is an octa-core Qualcomm Snapdragon 865 SoC and it is expected to be offered with up to 8GB of RAM and 256GB of storage that can be expanded up to 1TB using a MicroSD card.

For the cameras, the Samsung Galaxy S20 FE 5G will feature a triple rear camera setup. This includes a primary 12-megapixel wide-angle lens with f/1.8 aperture, a 12-megapixel ultra-wide-angle lens with 123-degree field of view (FoV) and f/2.2 aperture and lastly an 8-megapixel telephoto lens with f/2.0 aperture. The rear cameras support 3x Optical Zoom, up to 30x Super-Resolution Zoom, OIS (Optical Image Stabilization) and Tracking AF. While on the front there will be a 32-megapixel selfie camera with f/2.0 aperture along with autofocus support.

The smartphone will be housing a 4,500mAh battery 15W fast charging, wireless charging and Samsung’s Wireless PowerShare support. On the connectivity front, there will be 5G, 4G LTE, Wi-Fi, Bluetooth v5.0, GPS/ A-GPS, NFC, and a USB Type-C port. The sensors onboard include an accelerometer, ambient light sensor, gyroscope, hall sensor, and a proximity sensor.

Komila Singhhttp://www.gadgetbridge.com
Komila is one of the most spirited tech writers at Gadget Bridge. Always up for a new challenge, she is an expert at dissecting technology and getting to its core. She loves to tinker with new mobile phones, tablets and headphones.
Facebook
Twitter
WhatsApp
Linkedin
ReddIt
Email
Previous articleMarch 30 Flipkart Daily Trivia Quiz Answers: Answer to win exciting prizes
Next articlePoco X3 Pro smartphone launching today in India