The device will come with similar specs to the LTE variant. 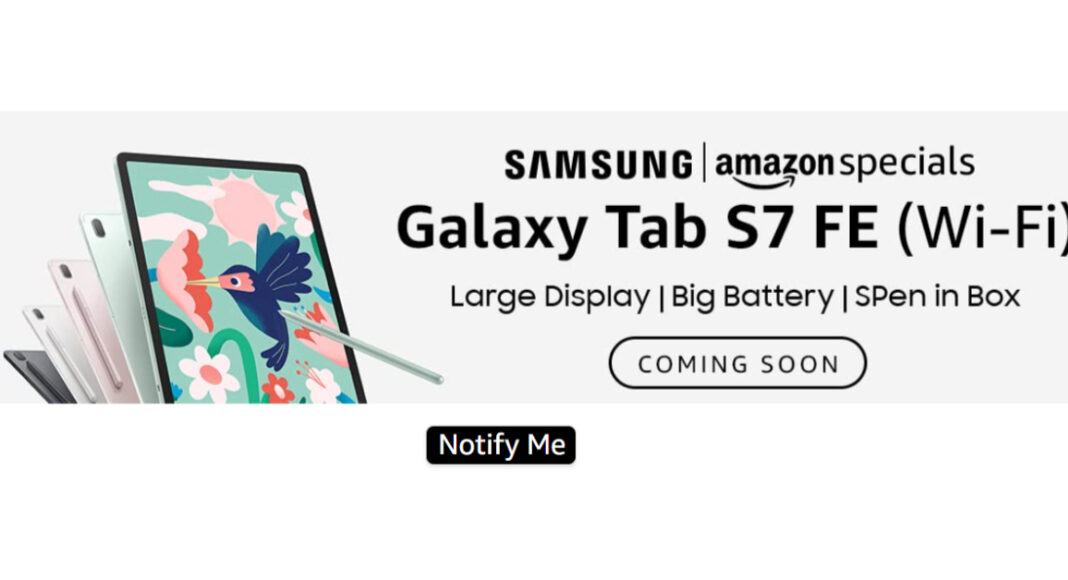 Samsung is all set to launch the Galaxy Tab S7 FE Wi-Fi only variant in India soon. The company recently listed the Fan Edition of the Tablet to tease the launch as well as its availability on Amazon. A few months back the South Korean giant introduced the Galaxy Tab S7 FE but now plans to bring the Wi-Fi variant to the country.

The Amazon India promo page does not reveal the exact details of the upcoming Samsung Galaxy Tab S7 FE Wi-Fi only model. Besides this, the e-commerce platform only mentioned that it’s “coming soon.”

As of now, the company offers Galaxy Tab S7 FE’s LTE variant in India that launched in June this year with a price tag of Rs 46,999 for the 4GB RAM with 64GB storage whereas the 6GB RAM with 128GB storage variant at Rs 50,999. The Tab comes in four colour options: Mystic Black, Mystic Green, Mystic Pink, and Mystic Silver.

The specs of the upcoming tablet will remain the same as the LTE model. The Samsung Galaxy Tab S7 FE Wifi-only version will feature a 12.4-inch WQXGA TFT display with 2,560×1,600 pixels of resolution. It will run on Samsung One UI based on top of Android 11. Under the hood, it will include a Qualcomm Snapdragon 750G SoC. The configuration is not confirmed but the cellular variant comes with up to 6GB of RAM and 128GB of storage options. The storage can be expanded up to 1TB via a microSD card.

The Samsung Galaxy Tab S7 FE Wifi-only will come with an 8-megapixel main rear sensor that supports 1080p video recording at 30fps. On the front, there is a 5-megapixel camera sensor for taking selfies. The tablet will include Bluetooth v5, USB Type-C port, Gigabit Wi-Fi GPS, and a USB Type-C 3.2 Gen1 port on the connectivity front. In addition to this, there will be an accelerometer, compass, gyroscope, ambient light sensor, and hall sensor. The device may be backed by a 10,090mAh battery with 45W fast charging support.

Now the South Korean tech giant has listed the Samsung Galaxy Tab S7 FE Wi-Fi only version on Amazon suggesting an imminent launch in the country. The company may anytime announce the launch of its Tablet on the e-commerce platform.

Komila Singhhttp://www.gadgetbridge.com
Komila is one of the most spirited tech writers at Gadget Bridge. Always up for a new challenge, she is an expert at dissecting technology and getting to its core. She loves to tinker with new mobile phones, tablets and headphones.
Facebook
Twitter
WhatsApp
Linkedin
ReddIt
Email
Previous articleEXCLUSIVE: First look renders of the upcoming Apple iPhone 13 show diagonally placed camera lenses and a smaller notch
Next articleiQoo 8 tipped to launch in India next month: All the details