In the past, the smartphone has appeared on various certification websites 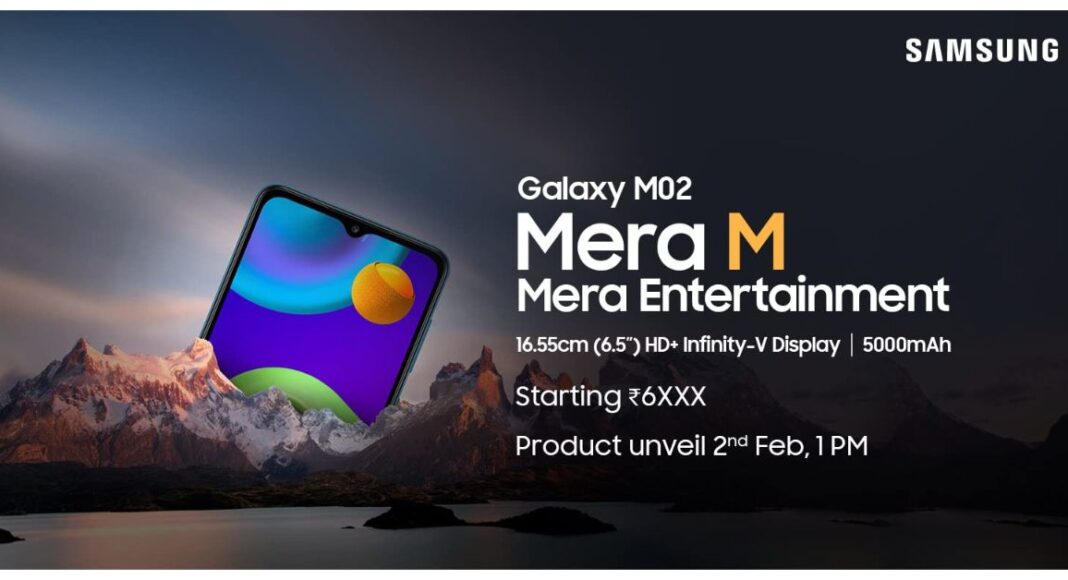 The South Korean smartphone company Samsung is all set to launch a new smartphone in the Indian market under the affordable budget segment. The company has planned a launch event for Samsung Galaxy M02 on February 2. The affordable smartphone is revealed to be available for purchase via Amazon India website. To show the availability of the upcoming device the e-commerce website has also created a dedicated microsite for Galaxy M02.

The rumours related to Samsung Galaxy M02 have been doing the rounds on the web for some time now. The company has now confirmed to launch this device in India on February 2. As per the dedicated landing page for the upcoming smartphone created on Amazon, the launch event will take place via an online launch event starting at 1 PM. The microsite also highlights some more information related to M02. As per the microsite, the phone is said to fall under Rs 7,000 which is cheaper than its predecessor Galaxy M01 that debuted in June last year.

To recall Samsung Galaxy M01 was launched in India in a single 3GB RAM with 32GB storage option priced at Rs 8,999. In addition to this last month in December, the company also reduced the price of the mobile phone by Rs 1,000 which now retails at Rs 7,499.

Speaking of the specification the landing page highlights that the Samsung Galaxy M02 will be featuring a 6.5-inch HD+ Infinity-V Display. Furthermore, there will be a 5,000mAh battery onboard. Rumours suggest that the device is going to be a rebadged variant of Galaxy A02s which debuted in Europe in November last year. There it is made available in two variants of 3GB RAM with 32GB storage and 6GB RAM with 128GB onboard storage option.

In the past, the phone was also spotted on the BIS certification website. Galaxy M02 appeared with a model number SM-025F/DS. The listing on the Bureau of Indian Standards (BIS) certification website reveals that the upcoming Samsung smartphone will have dual-SIM functionality.

Similarly, the device with the same model number also appeared on the Wi-Fi Alliance website. In early December Samsung Galaxy M02 was reportedly spotted on the company’s India website with a model number SM-M025F/DS. However, the support page on the official website doesn’t reveal any information pertaining to Samsung Galaxy M02 but carries queries related to how to increase memory space and response time in Galaxy Phones.

The Samsung smartphone was also listed on Geekbench with the same SM-025F model number suggesting the device to ship Android 10 out-of-the-box. The phone’s single-core score is 128 and has achieved a multi-core score of 486. Furthermore, the device is expected to be powered by an octa-core Qualcomm Snapdragon 450 SoC, paired with 3GB of RAM.

Other than this the device is most likely to be powered by Qualcomm Snapdragon 450 SoC. It is rumoured to be available in a single configuration of 3GB RAM with 32GB storage. In addition to this, the upcoming smartphone is speculated to come with dual rear cameras on its back that will include a primary 13-megapixel sensor while on the front it is going to sport a 5-megapixel selfie camera.

Komila Singhhttp://www.gadgetbridge.com
Komila is one of the most spirited tech writers at Gadget Bridge. Always up for a new challenge, she is an expert at dissecting technology and getting to its core. She loves to tinker with new mobile phones, tablets and headphones.
Facebook
Twitter
WhatsApp
Linkedin
ReddIt
Email
Previous articleJanuary 29 Flipkart Daily Trivia Quiz Answers: Answer to win exciting prizes
Next articleTelegram’s latest update now lets you migrate chats from WhatsApp: Here is how