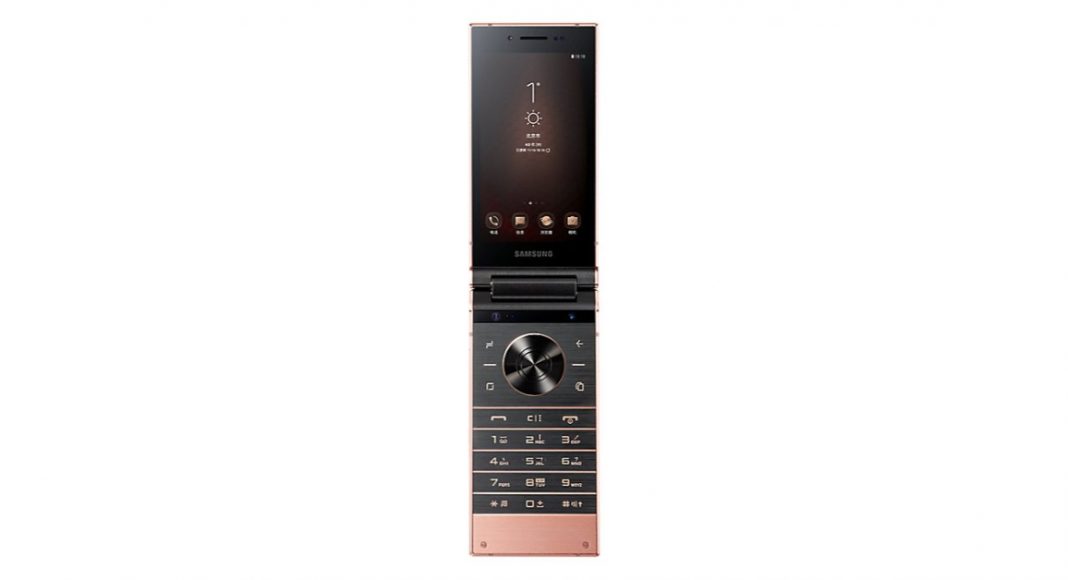 After unveiling its foldable phone last week at Samsung Developer Conference, the South Korean technology giant has today launched a new clamshell phone, called W2019. The phone comes with two displays and a physical keypad is also present on it. As of now, the price of the newly launched Samsung W2019 phone has not been confirmed by the company, but it is expected to be over 10,000 yuan. What we do know for sure is the fact that Samsung W2019 will be exclusive to China Unicom.

Coming to the specifications of the device, Samsung W2019 sports two 4.2-inch Super AMOLED displays, and both have a screen resolution of 1920×1080 pixels. The smartphone manufacturer has confirmed that the smartphone runs Qualcomm Snapdragon 845 processor and house a 3,070mAh battery.

The clamshell phone comes with 6GB RAM and is available in 128GB and 256GB onboard storage options. For more storage, users have an option of installing a microSD card. The phone has support for Bixby and comes without a 3.5mm jack.

The Android 8.1 Oreo based device is basically aimed at those who love flip phones and is the successor of Samsung W2018. The phone bends around a rectangular hinge and has antenna lines running along it.

It has been said that the new phone comes with a plastic body with a metallic finish, however, the same has not yet been confirmed by the company.

For imaging duties, Samsung W2019 comes with a dual rear camera setup that has 12MP+12MP cameras. There is also an 8MP front facing snapper for selfies and video calls.

Samsung W2019 phone is available in Rose Gold and Platinum colour options. Its dimensions are 132.9 x 63.4 x 17.3mm and it supports Wi-Fi, Bluetooth, GPS/A-GPS, NFC support, and a Type-C USB for connectivity.

As we mentioned earlier, Samsung last week unveiled it foldable phone that can work as a tablet and can also be folded into a candybar phone. The foldable phone by Samsung also comes with two displays. The new foldable device by Samsung promises more screen space and multitasking to users. Last week, we only saw the prototype of the phone as Samsung is still working on it. The new device is expected to be there at CES 2019 and reports have also said that it will launch with Samsung’s Galaxy S10 lineup.

Avani Baggahttp://www.gadgetbridge.com
Avani has an immense love for reading, travelling and food, but not necessarily in the same order. Avani almost started pursuing law, but life had other (better) plans for her and she chose to be a writer instead (luckily!) She previously covered technology at Times Internet and wrote about smartphones, mobile apps and tech startups. When she’s not writing, you’ll be able to find her in book stores or catching up on her social life.
Facebook
Twitter
WhatsApp
Linkedin
ReddIt
Email
Previous articleApple announces free repairs for these ‘defective’ iPhones and MacBook Pros
Next articleXiaomi has increased the price of these five devices in India