T-series loses its lead as the No.1 YouTube channel 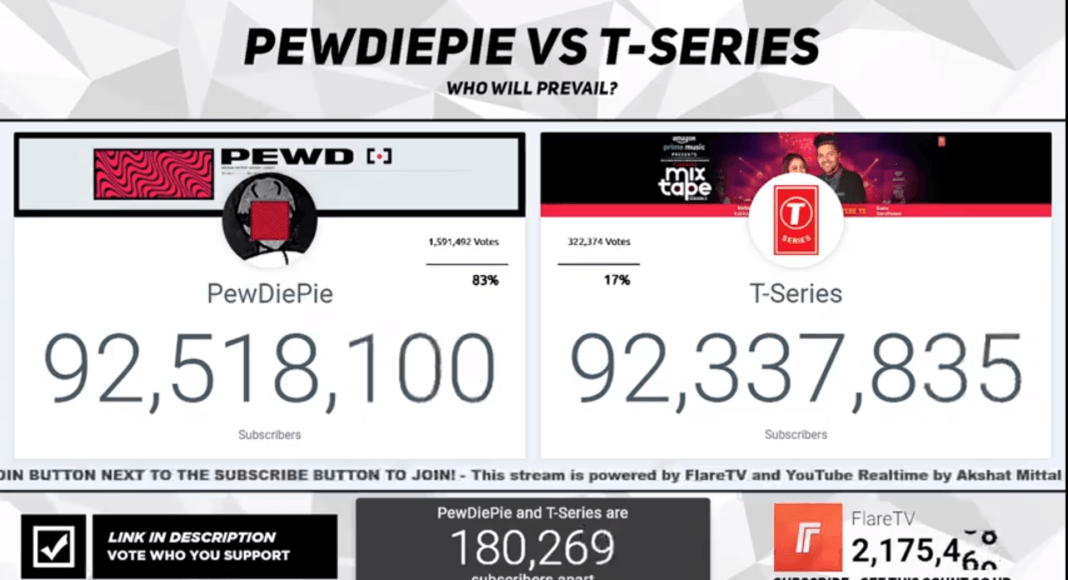 Felix Arvid Ulf Kjellberg’s PewDiePie was defeated by India’s T-series last week where the latter’s YouTube channel gained a lead of more than 50,000 subscribers making it the No.1 channel on the video platform. But that victory of T-series didn’t last long as PewDiePie has once again taken the lead from T-series. Today, PewDiePie became the biggest YouTube channel again after it surpassed T-Series by more than 1,50,000 subscribers.

After being defeated last week, PewDiePie’s channel was promoted by two YouTube channels – kwebblekop and Philip DeFranco – who already have a large number of subscribers. The promotion gave PewDiePie the push he needed to defeat T-series and now they stand with a difference of more than 1,50,000 subscribers. This is not the first time the win-lose game between the two biggest YouTube channels had been played. We should mention that T-series has defeated PewDiePie many times in the past to become number 1 channel on YouTube. But PewDiePie and his followers find a way to surpass T-Series, even if that means buying billboards, hacking printers or getting slots on TV. The battle between the two channels has been going on for more than seven months now.

Last week, when PewDiePie was defeated and he didn’t take being the No. 2 very well. He actually made a video ‘congratulating’ T-series and posted it on YouTube. However, he was actually being sarcastic and telling it took a “corporate with every Bollywood son” to defeat him, conveniently not mentioning his prior association with Disney, which is also a corporate. He didn’t stop at taking digs at the record label, but went ahead and took jabs at Indians as well in his video by talking about ‘India’s broken caste system’ and ‘crippling poverty.’

It is not the first time PewDiePie has been supported by other YouTubers and YouTube channels. Many channels came to support PewDiePie so that an individual would become the No. 1 channel on YouTube rather than a corporate – T-series. In the past, to increase PewDiePie’s subscribers hacking was also used where ‘someone’ hacked printers worldwide and urged the people to subscribe to PewDiePie.

According to the data from Social Blade, T-series surpassed PewDiePie over 120 times since the battle however, the YouTuber found a way to make a comeback every time, even though he claims that he doesn’t care about T-Series or numbers in general. The last lead T-series had over PewDiePie was in March where it had gained a lead of more than 50,000 subscribers.

We’re on the brink of becoming the world’s biggest @YouTube channel. We can make history. We can make India win. Subscribe to @TSeries #BharatWinsYouTube https://t.co/izEu8dzHdf pic.twitter.com/dJumzHwADa

Till now, T-series chairman Bhushan Kumar had stayed away from the battle and all the controversy going on between the two channels. But last month he too came forward and asked the Indian YouTubers to support the channel and make India win’.

Bhushan Kumar on his Twitter handle wrote, “We’re on the brink of becoming the world’s biggest @YouTube channel. We can make history.”

With the battle reaching new heights, it is yet to be seen which of the two will become not the winners but be first to reach 1 billion YouTube subscribers as both the channels have more than 90 million subscribers.

Aman Singhhttps://www.gadgetbridge.com/
Aman Kumar Singh has a Masters in Journalism and Mass Communication. He is a journalist, a photographer, a writer, a gamer, a movie addict and has a love for reading (everything). It’s his love of reading that has brought him knowledge in various fields including technology and gadgets. Talking about which, he loves to tweak and play with gadgets, new and old. And when he finds time, if he finds time, he can be seen playing video games or taking a new gadget for a test run.
Facebook
Twitter
WhatsApp
Linkedin
ReddIt
Email
Previous article
MG Motor unveils India’s first internet car, The Hector
Next article
Samsung to bring K-drama and K-pop content for Indian users via its My Galaxy app