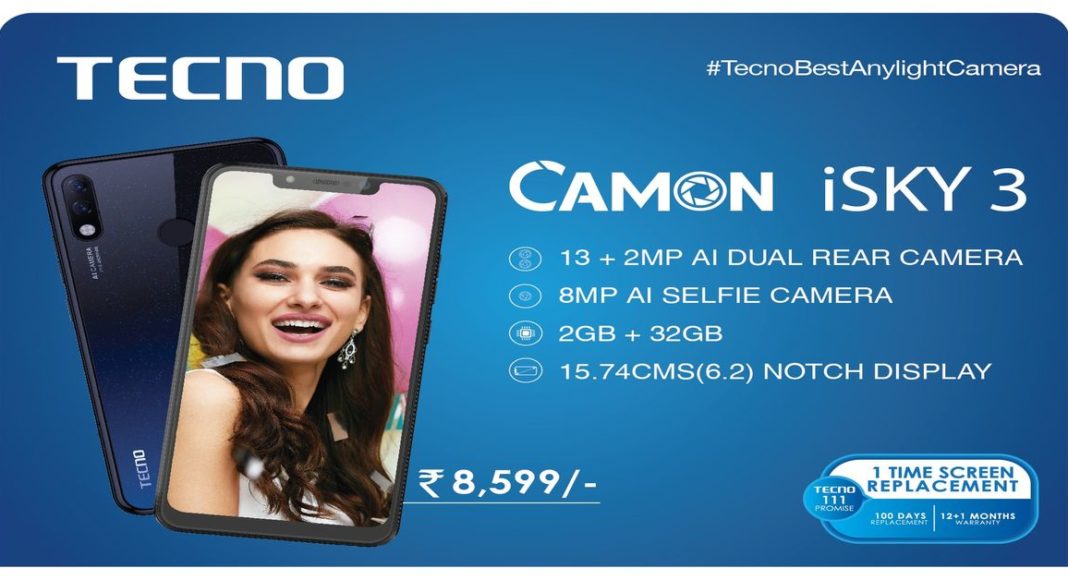 The CAMON iSKY3 smartphone is available at Rs 8,599 and it comes in 4 colour options — Midnight black, Aqua blue, Champagne Gold and Nebula black.

The smartphone also comes with a ‘111’ brand promise which covers a one-time screen replacement, 100 days of free replacement and one month of extended warranty.

TECNO CAMON iSKY3 sports a 6.2-inch HD+ display that comes with a notch on the top and has an aspect ratio of 19:9 with 88% screen-to-body ratio. It is powered by 2.0 GHz 64-Bit QuadCore processor coupled with 2GB RAM and 32GB of internal storage. The smartphone can further support a microSD card up to 256GB. TECNO CAMON iSKY3 comes with dual-SIM card support (4G VoLTE support on both SIMs) and has a dedicated microSD card slot. The CAMON iSKY3 smartphone carries a 3,500mAh battery which, according to the company, is capable of giving 350 hours of standby time, 12 hours of calling, 6.5 hours of web browsing and 7 hours of gaming. It also comes with an AI Power Management which optimizes the battery life.

Arijeet Talapatra, CEO of TRANSSION India said, “Our latest offering CAMON iSKY 3 is powered by latest intuitive software Android 9 Pie operating system, which will substantially change the consumer smartphone experience.  The device harnesses the power of artificial intelligence to give a more tailored experience by emphasizing on machine learning, digital wellbeing and simplicity. At Rs 8,599, CAMON iSKY 3 is a future-ready “AI-power packed” device designed to cater to the aspirations of today’s tech savvy youth who want a smartphone that is faster, smarter, cameras that can shoot in any light, battery runs longer and comes loaded with latest innovations at the best value for money.”

According to the company, the CAMON iSKY 3 is a camera-centric smartphone, so it comes with a dual-rear camera setup of a 13MP main sensor with an f/1.8 aperture along with a 2MP depth sensor. The front panel of the smartphone holds an 8MP AI selfie camera with an f/2.0 aperture with 78-degree wide angle.

The CAMON iSKY 3 runs Android 9.0 Pie skinned with HiOS 4.6 which comes with features like smart panel, digital wellbeing and more. For security, there is a fingerprint scanner at the back but it also comes with face unlock feature for unlocking the device.

Aman Singhhttps://www.gadgetbridge.com/
Aman Kumar Singh has a Masters in Journalism and Mass Communication. He is a journalist, a photographer, a writer, a gamer, a movie addict and has a love for reading (everything). It’s his love of reading that has brought him knowledge in various fields including technology and gadgets. Talking about which, he loves to tweak and play with gadgets, new and old. And when he finds time, if he finds time, he can be seen playing video games or taking a new gadget for a test run.
Facebook
Twitter
WhatsApp
Linkedin
ReddIt
Email
Previous article
Samsung launches new 2019 AC series with Triple Inverter Technology in India: Price and specifications
Next article
Redmi 7 with Snapdragon 632 processor launched: Price and specifications