HomeMobilesVivo Z5 live images confirm that the smartphone will house a 4,500mAh...

Vivo Z5 live images confirm that the smartphone will house a 4,500mAh battery

The smartphone will be available in three colour variants Green, Blue, and White

Chinese smartphone maker Vivo has posted a live image of its upcoming smartphone Vivo Z5. The live image reveals that the new smartphone will come with the support of 22.5Wquick charging. The company is reportedly planning to launch the device on July 31 in its home market. Recently Vivoofficially revealed the phone renders on its website. According to the leaked renders, the Vivo Z5 smartphone includes a triple rear camera setup, a water drop-style notch along and an in-display fingerprint sensor. Vivo Z5’s specifications leaked online earlier too when the smartphone was listed on the TENAA website. According to the listing, the smartphone will feature a 6.38-inch display and it will come with 128GB of storage. However, until now, the company has not confirmed whether the smartphone will arrive in India or any other market besides China.

Vivo has posted the live images of its upcoming Z5 smartphone on it official Weibo account in a post that reads, “Large battery thousand machines should still have to support fast charge and ah, secretly give you a look at the end to be published Vivo Z5,4500mAh large battery fast charge + 22.5W.” 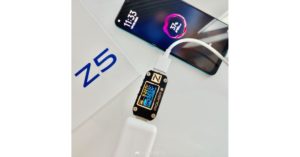 The image shows that the Vivo Z5 will sport a large 4,500mAh battery that will have support for 22.5W fast charging. In the image, it can be seen that the smartphone has been put on charge and it shows that it is charging at 37 percent. However, the company has not revealed how much time it will take to completely charge the smartphone

As mentioned earlier, a few days back the specifications of the Vivo Z5 Pro smartphone had surfaced on a TENAA listing. While the listing said that the device will house a4,420mAh battery, according to the shared live image of the Vivo Z5, it will boast a 4,500mAh battery. According to the listing, the smartphone will feature a 6.38-inch (1080×2340 pixels) AMOLED display and will be powered by a 2.3GHz octa-core processor. The Vivo’s smartphone will be available in two storage variants: 6GB RAM/64GBinternal storage and 8GB RAM/128GB internal storage.

The listing also suggests that Vivo Z5 will be sport a 48MP main sensor along with an 8MP secondary camera and a 2MP tertiary sensor. Furthermore, it also revealed that on the front of the device, a 32MP camera will be present.

Komila Singhhttp://www.gadgetbridge.com
Komila is one of the most spirited tech writers at Gadget Bridge. Always up for a new challenge, she is an expert at dissecting technology and getting to its core. She loves to tinker with new mobile phones, tablets and headphones.
Facebook
Twitter
WhatsApp
Linkedin
ReddIt
Email
Previous articleMicrosoft is removing Cortana from Xbox One with new redesign
Next articleNokia 220 4G, Nokia 105 feature phones launched: Key details