The previous speculations suggested that the Chinese smartphone maker Xiaomi is working on the faster 100W charging technology. Now a new report has emerged on the web suggesting that Xiaomi is working on developing a 120W charger. According to the report the 120W charger has just received the 3C certification hence indicating that the device is ready to arrive in the market.

Last year the company introduced its 100W Super Charge Turbo fast-charging tech in the year 2019 that can charge a phone in just 17 minutes. But now according to a report by GizmoChina, the Xiaomi’s 120W charger has got the from the nation’s safety bureau called 3C (China Compulsory Certificate). The certification has revealed that the charger can achieve a voltage of 20 volts and a current of 6 amps. In addition to this, the company is also planning to bring the world’s first smartphone supporting 100W charging. The Chinese tipster Digital Chat Station last week revealed that the device is expected to launch soon. 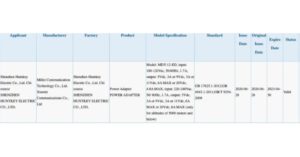 According to the report, the 120W charger with model number MDY-12-ED got its certifications and has now been spotted today. It is suggested to be the same charger whose video was leaked last month on the web and is capable of operating at 5V 3A, 9V 3A, 11v 6A, 20V 4.8A and 20V 6A. Moreover, it is expected to come with charging pins on opposite sides of the USB port. While the power inputs revealed that the device is capable of charging multiple devices including laptops, and tablets other than just a smartphone.

Until now official information has been revealed by the company about its upcoming super-fast charger as well as the smartphone. But if it comes it can completely charge a 4000mAh battery in less than 15 minutes. However, it remains unclear that which upcoming Xiaomi smartphone will be equipped with the new fast charger or the company might ship the 120W charger separately just like Apple does. But we can expect the much-awaited Mi Mix 4 will be bundled with the powerful charger which is most likely to be launched in the fourth quarter of 2020.