As we woke up this morning, we found out that YouTube is not working. Then we checked out the internet connection but that was also working fine. But when we checked into Twitter we found out that it’s not just us but everyone is furious over the YouTube down issue. At the time of writing the issue still persisted and we also checked the status on DownDetector and there it also confirmed that YouTube has run into issues.

Actually, you would be able to search and browse on YouTube but the issue appears to be with the loading of the videos. So, everyone is having trouble watching videos on the platform. The YouTube team via Twitter also confirmed the trouble and currently it is working on fixing this issue.

It says, “If you’re having trouble watching videos on YouTube right now, you’re not alone – our team is aware of the issue and working on a fix. We’ll follow up here with any updates.”

YouTube’s other services have also been affected which includes YouTube TV and movies and TV shows. According to the Verge, the TV shows you’d purchase through Google TV (formerly known as Google Play Movies & TV) also hit and are not able to load. 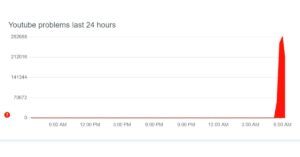 As we said earlier DownDetector is also showing that YouTube is down and users have taken to the platform to report that the Google video streaming platform is not working. The lodged reports confirm that the outage is worldwide. Those who are unaware of DownDetecter is a website that monitors whether a site is working or not

When we checked the web platform the website successfully loaded but when we launched a video the buffer wheel kept showing. Also, the search bar and video thumbnails are working normally. It is worth noting that even YouTube also did not respond immediately to this outage. And when it responded it also didn’t make clear what has caused YouTube down. Also, this one of the most used and popular video streaming platforms and we are expecting the company should fix this issue immediately.

Komila Singhhttp://www.gadgetbridge.com
Komila is one of the most spirited tech writers at Gadget Bridge. Always up for a new challenge, she is an expert at dissecting technology and getting to its core. She loves to tinker with new mobile phones, tablets and headphones.
Facebook
Twitter
WhatsApp
Linkedin
ReddIt
Email
Previous article
Diwali Gift Guide: Top 10 gadgets for tech-savvy people this festive season
Next article
November 12 Amazon Quiz: Today you can win Samsung Galaxy Watch Active