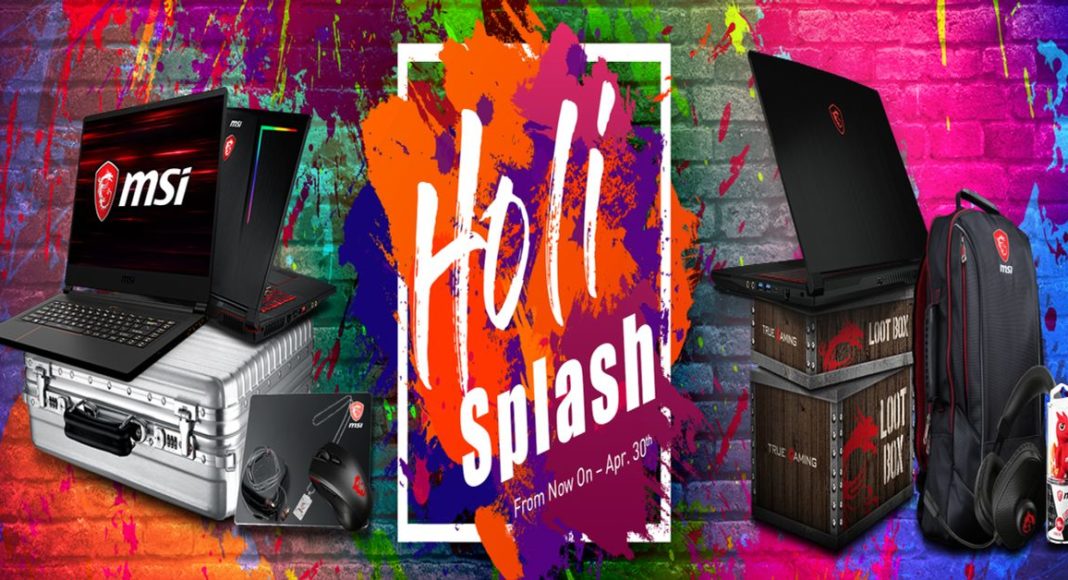 Gaming laptops and peripherals maker MSI has announced the Holi Splash Sale in India before the arrival of the festival. The sale will start today onwards and will go on till April 30, 2019. During this sale, the company is offering various deals on their gaming and non-gaming laptops. The company is also offering special bundled gifts with the purchase of the MSI laptops. Here’s a look at the offers you can avail:

During the Holi Splash Sale, if the customer purchases MSI RTX Laptops or GF75 or the Prestige Series Laptops then they can redeem special bundled gifts.

Those special bundled gifts offered by MSI include:

On the purchase of any MSI GT, GS, GE series of gaming laptops with GeForce RTX Graphic Cards from MSI India authorized retail store or any online sellers, the customers will get a gaming mouse along with an Elite Case as a special bundle gift.

While on the purchase of any MSI GL73 with GeForce RTX Graphic Cards or MSI GF75 from MSI India authorized retail store or from any online sellers, the customers will get a Lootbox along with a Gaming backpack as special bundle gifts.

Lastly, if the customer purchases any MSI Prestige Series laptops – MSI P65, MSI PS63 or MSI PS42 – from MSI India authorized retail store or from other online sellers, they will get an extra 1-year Domestic Warranty along with a standard mouse.

It should be noted that MSI had launched a series of gaming laptops with Nvidia GeForce RTX graphics last month in India. The series of laptops launched by MSI includes the MSI GS65 Stealth, the MSI GT Titan, the MSI GE75 Raider and the MSI GL. Along with that, the company also launched two new Prestige series of laptops aimed for professionals. The Prestige series from MSI is not a gaming laptop which the company is known for but an ultrabook like Microsoft Surface.

If we talk about the price, then the MSI GS series starts at Rs 79,990 and on the other hand the MSI Prestige laptops start at Rs 77,990.

The laptops are available on online e-commerce websites along with offline MSI stores in New Delhi, Bengaluru, Kolkata and Pune.

MSI laptops are known for gaming and performance and are popular and well-known among the gamers. With the Holi Splash Sale, MSI is giving a chance to the users to buy the laptops and get additional gifts as well.

Aman Singhhttps://www.gadgetbridge.com/
Aman Kumar Singh has a Masters in Journalism and Mass Communication. He is a journalist, a photographer, a writer, a gamer, a movie addict and has a love for reading (everything). It’s his love of reading that has brought him knowledge in various fields including technology and gadgets. Talking about which, he loves to tweak and play with gadgets, new and old. And when he finds time, if he finds time, he can be seen playing video games or taking a new gadget for a test run.
Facebook
Twitter
WhatsApp
Linkedin
ReddIt
Email
Previous article
Fujifilm X-T30 APS-C mirrorless camera launched in India: Price and specifications
Next article
Black Shark 2 render revealed by the CEO Peter Wu before its launch