HomeReviewsHonor View 20 review: A stunning flagship at a good price

Honor View 20 review: A stunning flagship at a good price 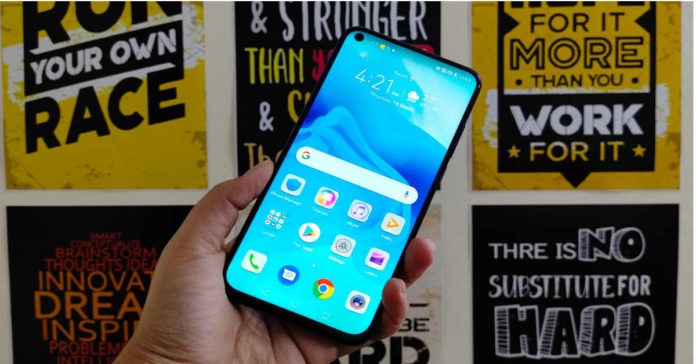 Like always, we’ll begin by talking about the design of the smartphone. Honor has made sure that its View 20 smartphone manages to make quite an impression with its appearance on the users. The Honor View 20 smartphone comes with a glossy back panel, but unlike most other devices in the same range, the company has added a V-shaped pattern here that reflects light when the handset is placed at certain angles. Honor View 20 was launched by the Chinese smartphone brand in three colour variants – Midnight Black, Phantom Blue and Sapphire Blue. The device that we got for review was dressed in Sapphire Blue and we should also add that if you wish to buy the Phantom Blue coloured option, it is only available in 8GB RAM/256GB storage version. 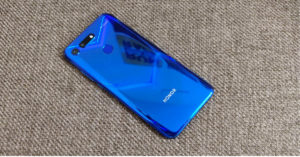 Besides this, the back panel of the smartphone houses the dual rear cameras. While one sensor is in one module alone, the other is coupled with the LED flash of the device. And they are placed horizontally rather than vertically. The fingerprint sensor and the Honor branding are also on the back of the handset. The power and the volume buttons of the Honor View 20 smartphone are placed on its right edge, while the SIM tray is on the left. On the top edge, you will see that the 3.5mm headphone jack, an IR emitter and an ambient light sensor are placed. At the bottom, the USB Type C port, the loudspeaker and the primary microphone of the handset are present.

The front panel of the Honor View 20 smartphone is dominated by a 6.4-inch full HD+ display that has a punch hole on the top left to house the selfie camera. We should mention that Honor View 20 is the first smartphone to launch in India to come with a display like this. Otherwise, we have seen devices with notches, sliders or pop-up cameras. Although we were apprehensive about the punch hole display hampering the video watching experience on Honor View 20, it surprisingly didn’t pose any issues during our time with the mobile. The primary reason for this is that the hole is located in the corner of the display so it didn’t hinder the experience too much. In fact, notches are more of a distraction than the hole. 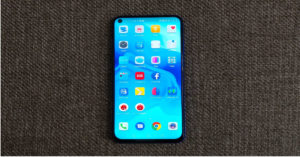 We really liked the display of this smartphone. It showed bright colours that remained consistent at different viewing angles and projected sharp images. Never did the images or videos on Honor View 20‘s display lose clarity. Furthermore, there is an option of adjusting the colour temperature on the handset’s display, so you can make them warmer to keep your eyes protected. In addition to this, you can choose the option of ‘Smart Display’ so that the resolution of the smartphone can be reduced to HD+ (automatically) to save power.

To sum it up, we would say that the design and the display of Honor View 20 really impressed us. The look and feel were very refreshing and premium. The display kept us hooked to our handset as we couldn’t stop watching our favourite shows on it, too.

Before we talk about the performance of the smartphone, let’s talk about its specifications. Honor View 20 handset runs Android Pie skinned with Magic UI 2.0 and is powered by Huawei’s 7nm octa-core HiSilicon Kirin 980 processor clubbed with 6GB/8GB RAM. The 6GB RAM model has 128GB of internal storage and the 8GB RAM has 256GB storage. Honor View 20 has a dual rear camera setup that comprises of a 48MP Sony IMX586 sensor with an f/1.8 aperture and a 3D ToF sensor. For selfies and video calls, there is a 25MP front-facing snapper. The device houses a 4,000mAh battery and it has support for 4G VoLTE, Bluetooth v5.0, Wi-Fi, GPS, and USB Type-C. 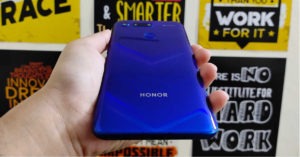 Coming to the software of the smartphone, it has a number of customisations. Although Android 9.0 Pie skinned with Magic UI is present, we should point out that it looks a lot like EMUI. The UI has been designed so that using the device with punch hole display remains a smooth experience. So, you will see that all the notifications on the display are placed on the right instead of the centre.

The Honor View 20 smartphone also comes with Digital Balance, that we earlier saw on Huawei Mate 20 Pro. The feature lets you manage how much time you spend on your smartphone. You can also opt for gesture navigation and a navigation dock instead of using the usual Android navigation buttons. We should add here that the navigation dock is actually a single floating button on the display of the smartphone that can be used to navigate.

The device had some pre-installed apps including Honor Club, Party Mode, HiCare, Camera360, Vigo Video, Facebook, Facebook Messenger, and Netflix. We should mention that some apps that are the company’s own cannot be uninstalled.

Speaking of the performance of the smartphone, we were really impressed by it. The combination of the Kirin 980 SoC and 6GB RAM managed to pull off some very heavy-duty tasks on the Honor View 20. We could easily launch and switch between a number of apps and even when we had 7-8 apps running in the background, we noticed no lag in the smartphone’s performance. We often used the Honor View 20 smartphone for multitasking like playing games and using it for navigation at the same time. Sometimes, we even watched shows on Netflix while using the device for getting directions to a certain place. Honor View 20 handled it all well. 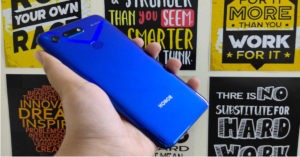 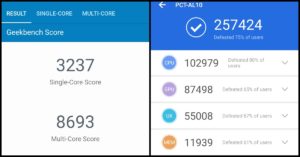 Coming to gaming, even heavy games like PUBG Mobile or Asphalt 9: Legends ran well on the smartphone. If you are someone who loves to spend hours playing games on your smartphone, Honor View 20 wouldn’t disappoint you. And it was a sheer cakewalk to play games like Temple Run 2 and Alto’s Odessey on this mobile device.

However, we must add that at times, when we used the mobile phone for heavy games and navigation, it did heat up a bit, like most other handsets with a glass back panel.

Coming to the 4,000mAh battery of the smartphone, it takes about an hour to be charged completely. And with usage that involves Google Maps, gaming, watching YouTube videos, and using social media apps, the battery lasted more than a day.

Moving on to the cameras of the smartphone, Honor View 20 sports a 48MP primary shooter coupled with a TOF 3D camera. The camera app of Honor View 20 smartphone comes with a regular photo and video modes, AR Lens, Night, Pro, Portrait, Aperture, Panorama, Artist and HDR modes. The images taken by Honor View 20 turned out to be superb. Although the camera is set on 12MP by default, you can adjust the settings to click images that are 48MP in resolution. This is something that we also saw in Huawei Mate 20 Pro. 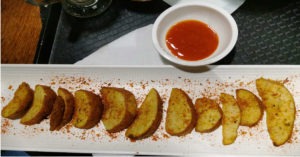 In well-lit conditions, the images were clear and sharp and had very accurate colours. When we enabled AI, there was a very visible difference as the contrast became higher and more details were added to the images. 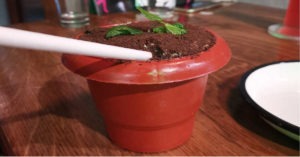 We clicked some Portrait shots and some shots with HDR mode on, and in both cases, we were happy with the results that we got. In the Portrait mode, there is an option of slimming the person down and making them look thinner by adding beauty modifications.

We simply loved the selfie camera of the device. To test how it works in conditions where there is literally no light, we clicked some pictures in a cinema hall. And our selfies turned out to be great, even without AI and beauty mode on. When we enabled them, the images became even better. In daylight, the shots taken were obviously better than the ones taken in dimly-lit areas. 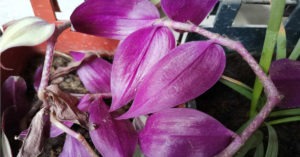 As a whole, you can say it has one of the best cameras on it in this price range. If you are a photography lover, you would not be disappointed at all.

At Rs 37,999, Honor View 20 smartphone is a great buy. The design is unconventional, the display is vibrant, the cameras are great and the device has an incredibly smooth performance. Some may not like the idea of having a display with a punch hole, since they may feel it’s a hindrance in watching videos, we did not encounter this issue during our time with our phone. There were instances when we felt that the handset warms up when we multitasked, but then that is an issue with all smartphones with glass back panels.

The software is extremely customised, so if that is not your cup of tea, you can go for OnePlus 6T for a cleaner UI at the same price from brands like Nokia. The facial recognition could have been better, but that is surely not a deal-breaker as the fingerprint sensor works just fine. None of these ‘issues’ is big enough, in our opinion. You would certainly not be disappointed if you buy the Honor View 20 smartphone. It is a solid performer and is great to look at too.