The new Galaxy M53 5G offers a promising set of features. Learn how the device performed in our detailed review of the same. 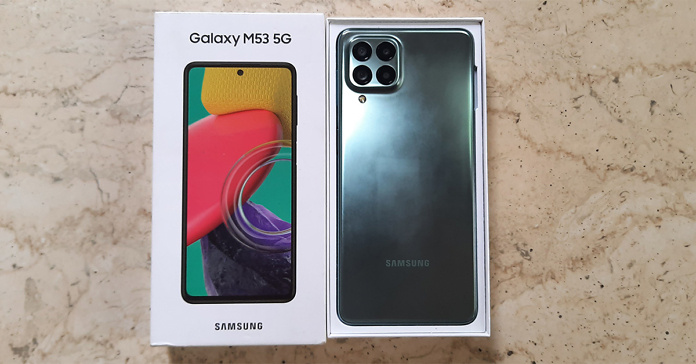 The all-new Samsung Galaxy M53 5G smartphone is here and we are very excited to share our review of the device with all of you. It is offered with 6GB/8GB RAM, which is extendable up to 16GB, as claimed by the brand. This is coupled with a 128GB/256GB internal memory. The smartphone comes with a 120Hz FHD+ Super AMOLED display and a 5,000mAh battery capacity. One of the highlights of this model is its 108MP quad-camera system, which is paired with a 32MP front camera. Here is a complete review of the Samsung Galaxy M53 5G so you can check out whether it is the right investment for you or not.

The Galaxy M53 5G smartphone comes riding a thin rectangular box. Along with the phone comes a USB to Type-C cable, a SIM ejector tool and a quick start guide within the package. As the brand tries to go green, it does not offer you an adapter with it.

The smartphone’s 6.7-inch shiny black display stares at you as soon as you unbox the package. Picking up the smartphone in your hands, you’ll feel it to be lightweight for its size. The 120Hz Super AMOLED Infinity-O display has a screen-to-body ratio of about 85%. It comes with a Gorilla Glass 5 protection. The screen resolution is 1,080×2,408 pixels, the aspect ratio is 20:9 and the pixel density is 394ppi. 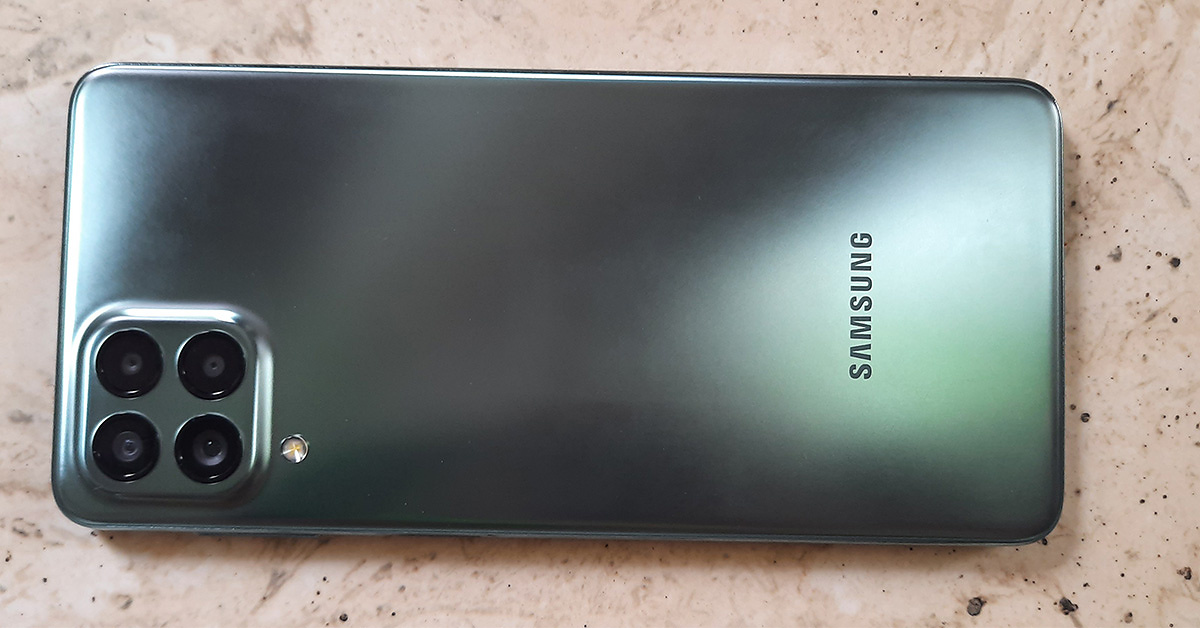 Flip the phone over and you’ll meet its sleek and glossy plastic back cover in its body colour. The Galaxy M53 is offered in three colours, Blue, Green and Emerald Brown. We were able to get our hands on its Green coloured model. The back has been given an elegant minimalistic look. It doesn’t seem fingerprint-resistant. The rear quad camera system is placed neatly and symmetrically on a mount. Just below the mount lies the flashlight of the device. At the bottom in the centre is the Samsung brand engraving, which completes the look of the smartphone. 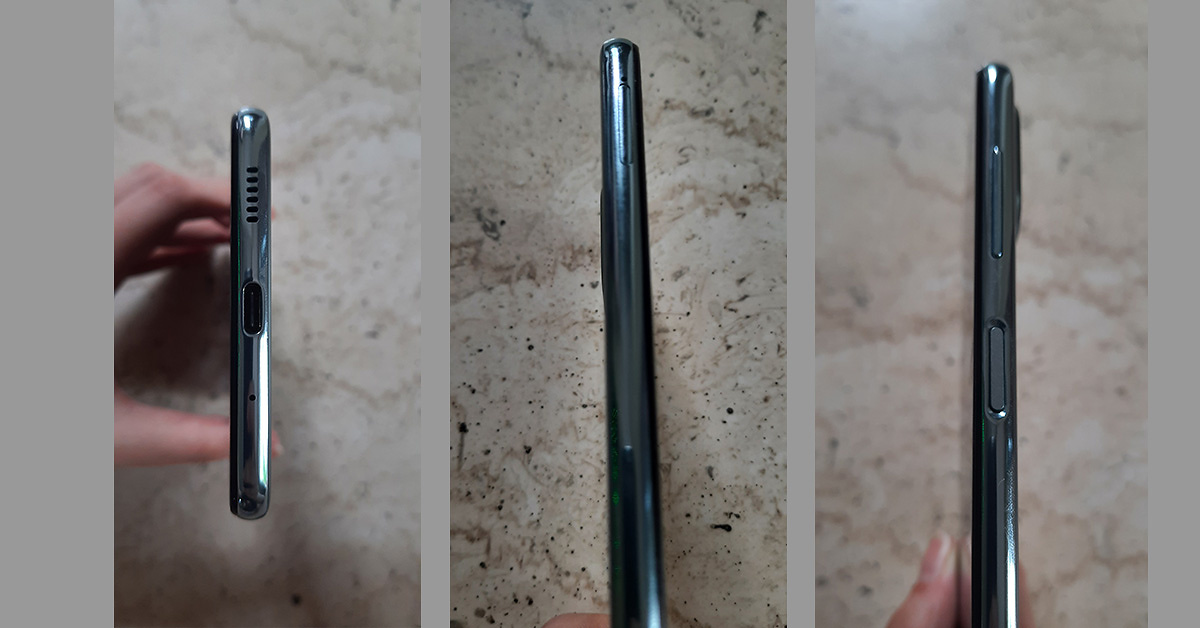 The model comes with a body-coloured metallic frame. On its left side lies the SIM card tray while on its right lies the volume button and the power button with an integrated fingerprint sensor. At the bottom of the frame lies the Type-C USB port along with the mono speaker. 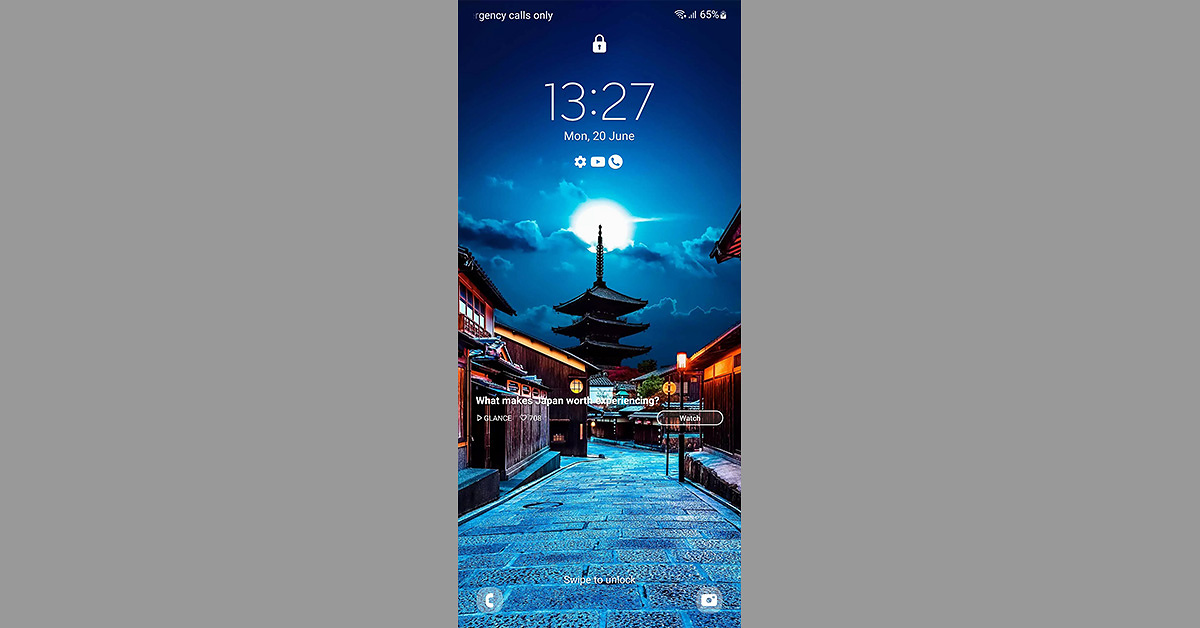 Bringing the phone to life, its bright and colourful FHD+ AMOLED display immediately appeals to the eyes. One gets to enjoy the features of the latest Android 12-based One UI 4.1 OS. The look and feel of its interface is that of a standard Samsung device. The screen colours appear to be well-lit and even the default theme has great contrast.

The icons within the home screen and the app drawer are square-shaped with rounded corners, as seen in a typical Samsung model. The touch of the smartphone feels quite soft and fluid. Overall, the display looks pretty and is easy to get accustomed to.

Streaming videos on Youtube is very life-like. The quality of the videos can be enhanced up to 2160p at a rate of 60fps. Watching movies and TV series on Netflix also provides a seamless experience. The picture quality delivered is super fine and the colours are vibrant. The Galaxy M53 5G comes with a mono-audio system. The mono-speaker works decently in terms of loudness and crispness of the sound. However, one still does miss stereo-audio output in the device. 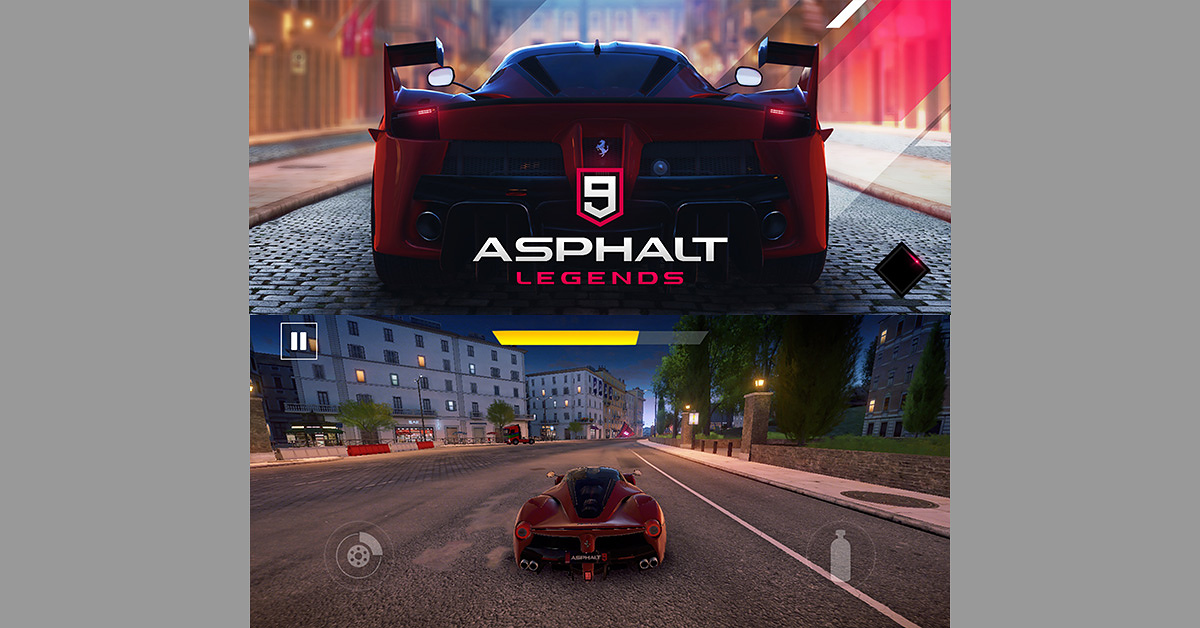 The gaming experience on the device was tested by playing high-end games like Asphalt 9 Legends. The graphics offered are commendable and the response to the touch commands is also swift. Movements and actions are smooth. Together with the audio, gaming on the smartphone is quite enjoyable. A stereo sound output would have surely taken the experience to the next level though.

Overall, the design of the Samsung Galaxy M53 5G is graceful and has a sophisticated character to it. The display of the smartphone is also pretty amazing and works flawlessly.

Elaborating further on the Galaxy M53 5G specifications, it gets offered with 6GB/8GB RAM options in combination with 128GB/256GB internal storage. The device supports nano dual-SIM and the microSD card slot shares its space with the SIM slot. It comes equipped with a MediaTek MT6877 Dimensity 900 (6 nm) Octa-core processor.

It also offers Bluetooth 5.2, Wi-Fi and 5G connectivity. The model comes with a Li-ion 5,000mAh battery which supports 25W fast charging as well as reverse charging. The battery life of the smartphone is also good. Upon heavy usage (including continuous binge-watching, gaming and camera use), it can last up to an entire day. After mild to moderate usage, it can last for more than a day. The hours may vary by the different applications in use. 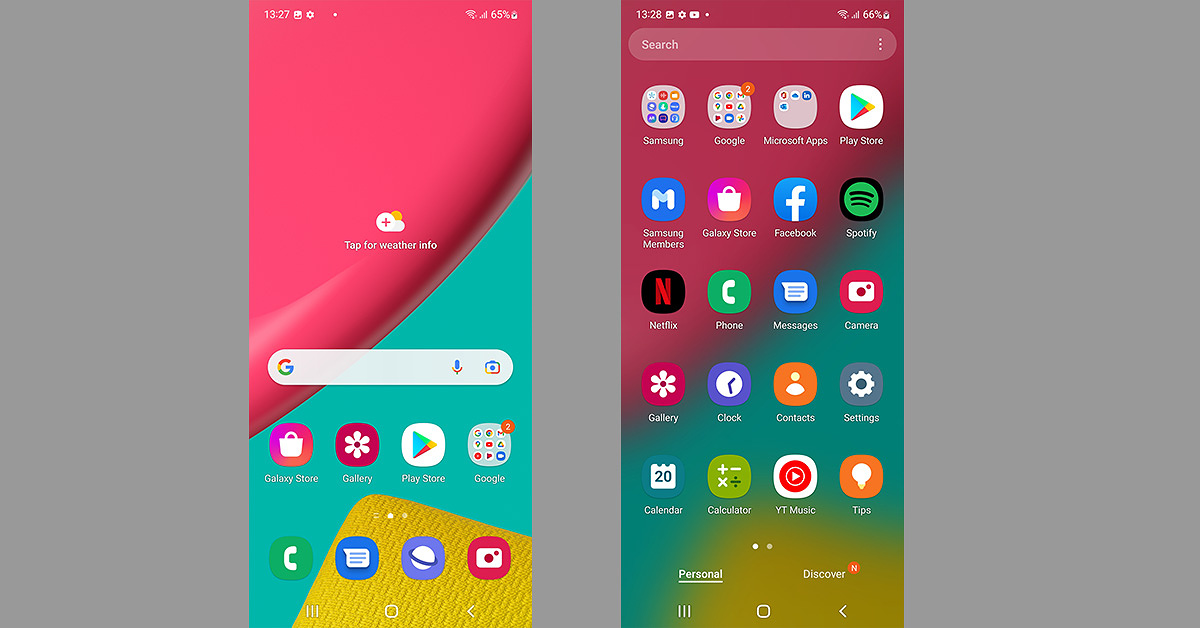 The device comes pre-installed with Android 12-based One UI 4.1 OS. The home screen and app drawer have a traditional Samsung interface. The device comes downloaded with some additional applications as well, which may or may not be useful. There was no app crash observed while using multiple applications simultaneously. Switching between apps was also quite hassle-free. The device also doesn’t seem to get heated easily upon usage for prolonged periods. 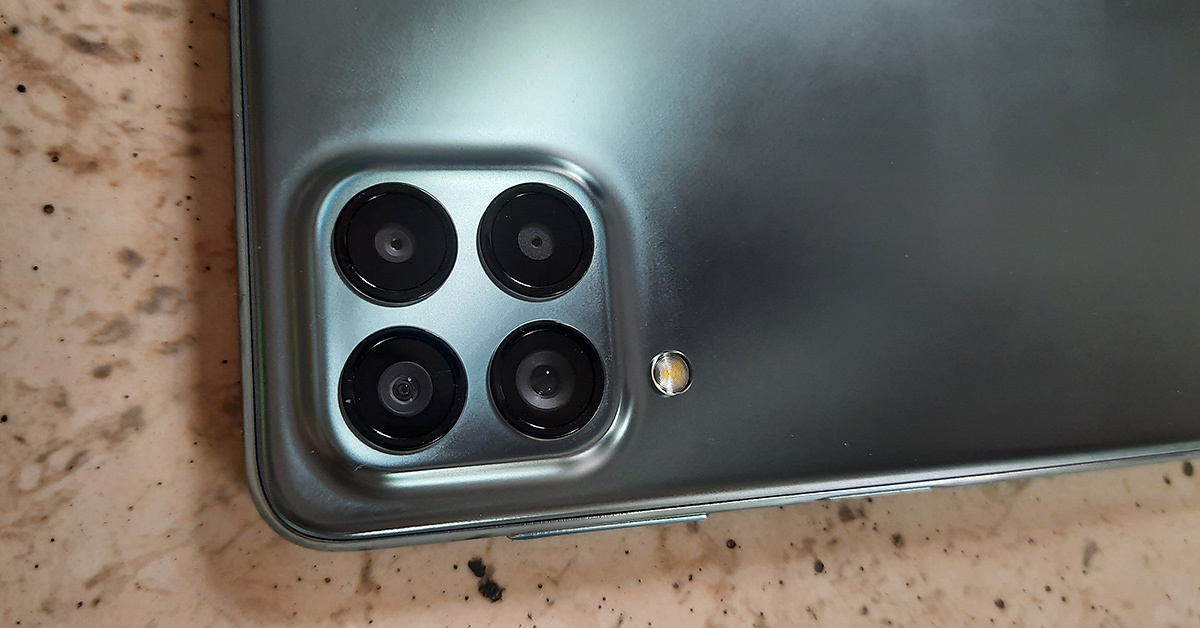 Coming to the Samsung Galaxy M53 5G camera review, it comes with a superb 108MP+8MP+2MP+2MP quad rear camera system, along with a 32MP front camera. It has 5 zoom modes, 0.5x, 1x, 2x, 4x and 10x. The picture quality degrades significantly as we go up the zoom scale after 2x. The 5 zoom modes are available for use from the rear camera in the standard Photo mode and Video mode.

The Night mode offers 2 zoom modes for the rear camera, 0.5x and 1x. Two zoom modes (a normal and a wide-angle) are offered for the front selfie camera Portrait mode, Photo mode and Night mode whereas no zoom options are offered for video captures from the front camera. Videos can be captured in UHD resolution with up to a 30fps frame rate from both front and back.

The rear camera’s Photo mode works great in capturing the fine details within the frame. The colour scheme is full of contrast and looks close to reality. Under suitable external conditions, the camera enhances each colour within the frame, making the images instantly pleasing to the eyes. The shots taken appear quite vivid in daylight.

The smartphone’s rear camera Portrait mode can very well be defined as one of its most significant highlights. Not only does it provide a superior picture quality, but the colours in the frame are captured extremely well. The overall result has a nice pop element to it. The blacks in the image are increased subtly while the saturation of each colour is tuned up a notch, producing astounding captures. You will fall in love with the camera’s capabilities in no time.

The rear camera’s Night mode also works pretty appreciably. Although the 0.5x zoom mode produces slightly blurry results, shots taken from the 1x zoom do not compromise in capturing the details at all. The surrounding lights captured by the camera help brighten up the image. Speaking of the front camera, it takes selfies quite decently.

The details are captured nicely while the skin tones appear close to reality. The Fun mode embeds all the Snapchat filters directly into the smartphone’s built-in camera, thereby providing ease of access. Apart from the above, the camera also offers various other modes like Food, Macro, Pro, Single Take, and many more.

Overall, the quality of the camera package offered with the Samsung Galaxy M53 5G is pretty impressive and makes you happy.

Read also: Samsung Galaxy A53 5G Review: Should You Pick It Up In This Price Range? 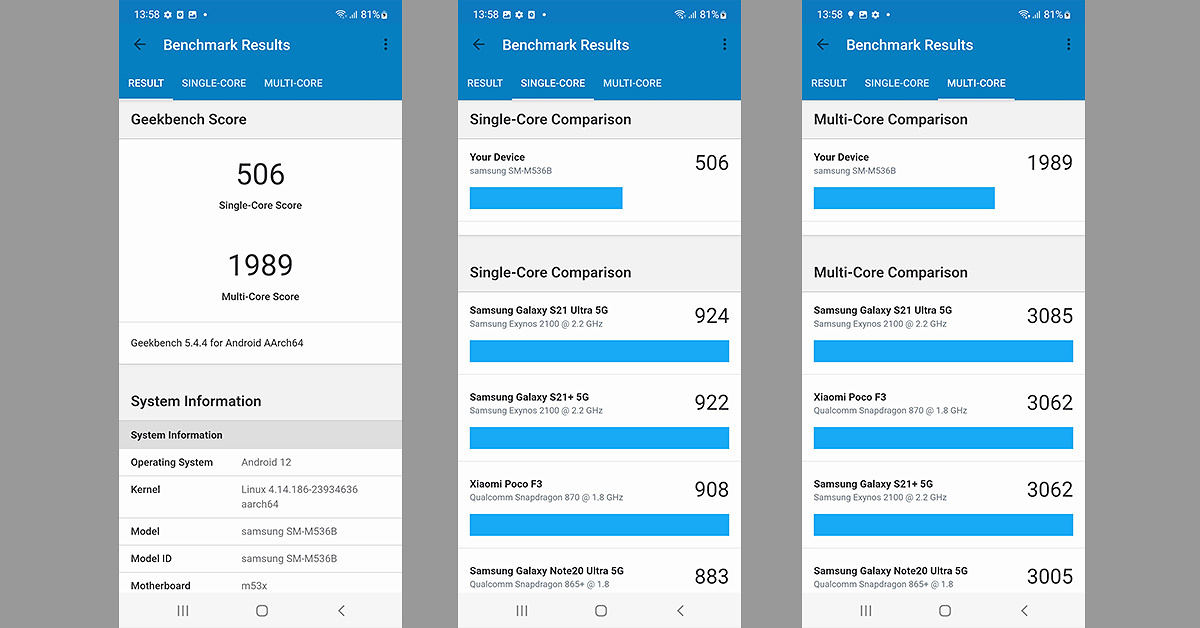 To sum up, the Samsung Galaxy M53 5G seems to be a great smartphone choice. It offers a sophisticated design along with commendable display quality. The performance of the device is also up to the mark while the clicks from its premium quality cameras appear quite striking. Geekbench 5 CPU benchmarking gives it a single-core score of 506 and a multi-core score of 1989. The price of the smartphone may seem to incline toward the higher end for some people. However, if that’s not an issue, we would gladly give you a go-ahead for buying this device. It is a delight to use.

- Advertisment -
The all-new Samsung Galaxy M53 5G smartphone is here and we are very excited to share our review of the device with all of you. It is offered with 6GB/8GB RAM, which is extendable up to 16GB, as claimed by the brand. This is...Samsung Galaxy M53 5G Review: Impressive Cameras And Performance