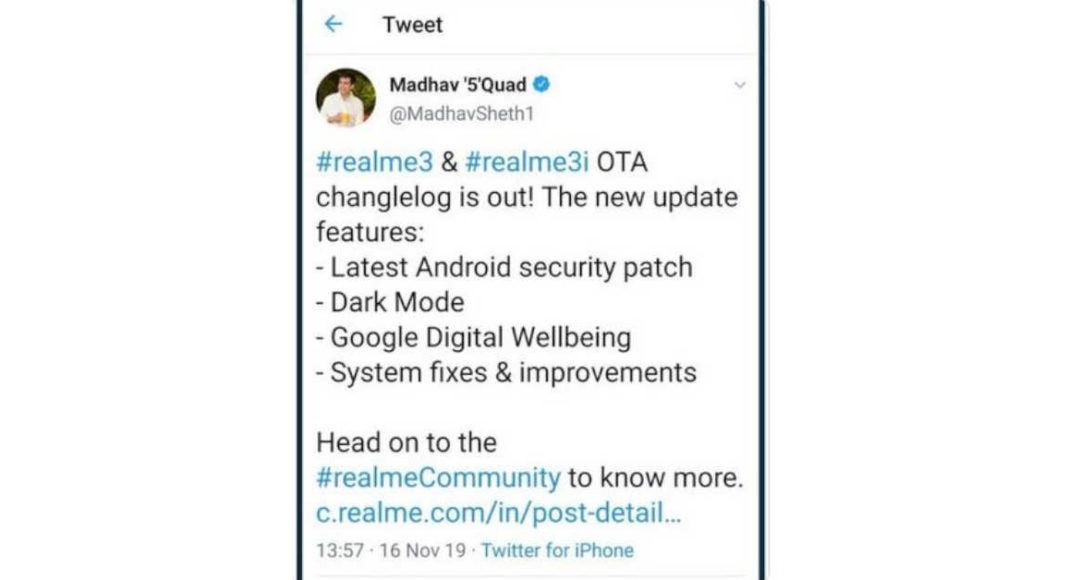 In the past, many Brand Ambassadors have goofed up by posting tweets through iPhones endorsing other brands. Following this trend, the latest ambassador was Madhav Sheth, Realme India’s CEO.

Realme is trending in the news for the big release of the Realme X2 Pro and Realme 5s on November 20 in New Delhi. However, right now the buzz is not on the phones, but instead on the Realme India CEO, Madhav Sheth.

The now deleted tweet was sent from an iPhone, which Twitterati realised and took screenshots of. The users spotted the “Twitter for iPhone” tag right below the message.

As a response to all the trolling, Madhav Sheth responded on Monday with a new tweet: “Having used all the renowned flagship phones over the last few days. I can assure you that #realmeX2Pro is not just the #FastestChargingFlagship but also has many more category best features in the lot. #FasterSharperBolder.”

Madhav Sheth’s tweet is more shocking, as this tweet is not from the brand ambassador but the CEO itself is totally unexpected.

Madhav Sheth’s witty comeback sets precedence to other brands who have faced similar issues before Realme.

In what has become common occurrence, brand ambassadors often goof up while tweeting. For example, The Brand Ambassador of the OnePlus brand, Robert Downey JR of Iron man fame, was found tweeting from an iPhone to which he smartly responded “Well, I guess it’s time to upgrade my assistant to a new OnePlus 7 pro so mistakes don’t happen again,” after the post went viral.

While causing issues to the person tweeted and the companies involved, it is a definite laugh out loud moment for all of us who get entertainment from such goof-ups. Before this Huawei handle was also used by one of this social media employee who posted a tweet using an iPhone, after which news broke that two employees have been sacked because of the same.