Ahead of the launch Realme Narzo 10 specification and pricing tipped online, to launch in India on March 26

The device is expected to be rebranded variant of Realme 6 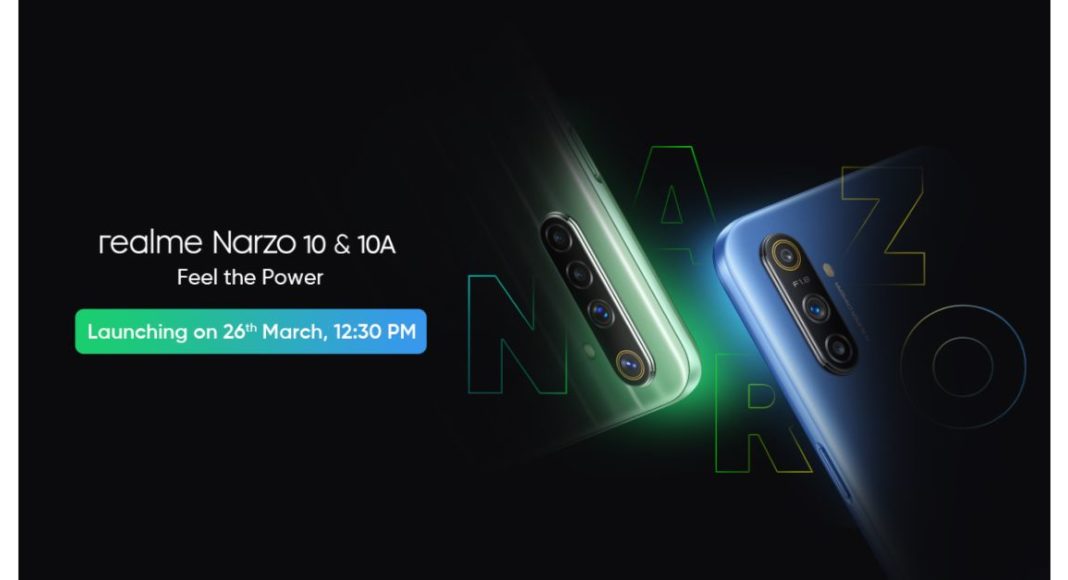 The Chinese smartphone company Realme is all set to launch another new smartphone in India next week. On March 26 the company is going to unveil its new ‘Narzo’ smartphone series. The line up will include Realme Narzo 10 and Narzo 10A. But ahead of the launch specifications as well as pricing of Realme Narzo 10 has been leaked on the web. The device is also said to be the rebranded variant of Realme 6i that was launched in Myanmar this week.

According to tipster Ishan Agarwal Realme Narzo 10 with model number RMX2040 was spotted in a retail store. The tipster also shared the image of the device which showcases its AnTuTu benchmark score of 203,078 points. Which revealed that the upcoming smartphone is going to come with a Mediatek G80 processor and is expected to cost around Rs. 15,000 which is somewhere similar to the Realme 6i Myanmar variant. There it has been launched with a price tag of MMK 249,900 which translates to Rs 13,300 for the base 3GB RAM with 64GB storage and the 4GB RAM with a 128GB storage model at MMK 299,900 that translates to Rs 16,000.

One of my source just tipped that RMX2040, possibly the upcoming #realme Narzo 10, was spotted in retail store and had a pretty decent benchmark score. The Mediatek G80 seems like a good processor, on par with SD712. Looks like Narzo will start from sub-15K segment?#realmeNarzo10 pic.twitter.com/0c1NMnZg8p

In reply to tipster Ishan Agarwal’s tweet, a user named Ishan Wankhade shared an image poster of Realme Narzo 10 that reveals its specifications. According to the post, the Realme Narzo 10 is going to feature a 6.5-inch display with mini drop notch and the device’s design has been created by Naoto Fukasawa. There is going to be a quad-camera set up consisting of a 48-megapixel primary sensor along with an ultra-wide-angle lens with 119 degrees of FoV, a Black and white portrait and a 4cm macro lens. For selfies, there will be a 16-megapixel front camera. The phone will pack a 5000mAh battery with up to 39 days of standby supported by an 18W quick charge.  Under the hood, it is speculated to equip the Helio G80 processor with Mali G52 GPU.

The company has confirmed that Realme Narzo 10 will be featuring a 6.5-inch display with an 89.8 percent screen-to-body ratio along with a waterdrop notch and a 5000mAh battery. Realme Narzo smartphone series is going to launch in India on March 26 via an online launch that is going to begin at 12.30 noon.

Komila Singhhttp://www.gadgetbridge.com
Komila is one of the most spirited tech writers at Gadget Bridge. Always up for a new challenge, she is an expert at dissecting technology and getting to its core. She loves to tinker with new mobile phones, tablets and headphones.
Facebook
Twitter
WhatsApp
Linkedin
ReddIt
Email
Previous article
OnePlus likely to launch OnePlus 7T Marble finish variant in the market, CEO Pete Lau shared images
Next article
Samsung offering a limited period cashback offer on Samsung Galaxy S20 and Samsung Galaxy S20+ in India