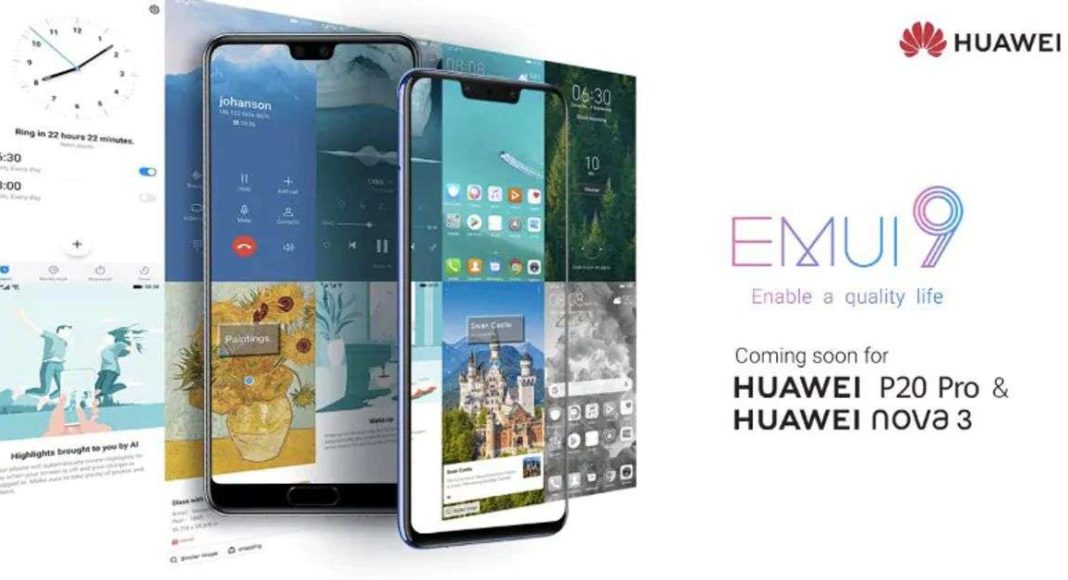 According to the Huawei teaser, the Chinese smartphone company is soon going to launch EMUI 9 based Android Pie update. The teaser does not specify as to when the update is going to rollout for the two phones, but it is a long time coming. The EMUI 9.0 based Android Pie update was announced back in October, 2018. This update has introduced a new UI, gesture-based navigation and HiVision visual search that helps you do image search very similar to Google Lens. Also, the EMUI 9.0 recognises a wide range of food items and provides a calorie estimate with the help of a camera image.

Considering that the Huawei P20 Pro and the Nova 3 are powered by a HiSilicon Kirin 970 SoC, it is anticipated that other Huawei phones having the same chipset will get this update too. This encompasses the Huawei P20, Huawei Mate 10, Huawei Mate 10 Pro, Honor Play, Honor View 10 and the Honor 10. With the new Hi Touch feature, users can search online by long pressing two fingers on an image. Plus, it can recognise landmarks from 15 countries and over 10 million famous artworks.

Huawei says that this feature recognises 120 million products from 200 e-commerce websites and 100 online stores. The EMUI 9.0 update also features one-click projection, GPU Turbo 2.0 and PC Mode. According to previous reports, users need to have a strong WiFi connection and a battery life of atleast 80 percent in order to update their phone to the new version of OS.

To talk about its specifications, the Huawei P20 Pro has an AMOLED capacitive touchscreen of 6.1-inches. The screen resolution of the phone is 1,080×2,240 pixels. There are two RAM variants—6GB and 8GB which come with storage options of 128GB and 256GB respectively. The main camera consists of a 40MP and 20MP sensor and the secondary/selfie camera consists of a 24MP sensor.

Connectivity options of the phone include WiFi 802.11 a/b/g/n/ac, dual-band, WiFi Direct, hotspot, Bluetooth 4.2, GPS, NFC, Infrared port and USB 3.1. The Huawei P20 Pro is powered by a 4,000mAh battery, which is known to keep it alive for more than 24 hours. With the new update the battery life might improve slightly. Sensors on this device are fingerprint, accelerometer, gyro, proximity, compass and colour spectrum.