All the devices will be available for pre-orders from September 17.

All the devices run on the A15 Bionic chipset. The new series is loaded with new technologies like 5G support, a new Cinematic Mode,  Dolby Vision HDR and a ceramic shield on the front. The new iPhone series will run on iOs 15 and comes with an improved MagSafe wireless charger.

Both iPhone 13 and iPhone 13 Mini come with the latest design and diagonally arranged camera lenses. There is a 6.06 inches (iPhone 13) or 5.42 inches (iPhone 13 mini)Super Retina XDR display. The screen offers an incredible contrast ratio for true blacks and a 28 percent increase in max outdoor brightness at 800 nits, with higher peak brightness for HDR content like photos and videos at 1200 nits. Both the phones have the Ceramic Shield front cover and Matte glass back. 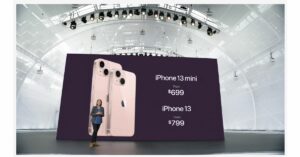 Under the hood, there is an A15 Bionic chipset with a six-core CPU with 2 high-performance cores and 4 efficiency cores. It has been paired with a new 4-core GPU specially designed with visuals and lighting effects in graphics-intensive games. The new 16-core Neural Engine is capable of 15.8 trillion operations per second, enabling even faster machine learning computations for third-party app experiences, as well as features like Live Text in Camera with iOS 15.

iPhone 13 and iPhone 13 mini are splash-, water-, and dust-resistant and were tested under controlled laboratory conditions and have a rating of IP68 under IEC standard 60529 (maximum depth of 6 meters up to 30 minutes). 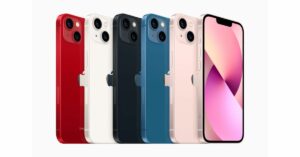 The Apple iPhone 13 and iPhone 13 Mini operates on iOS 15 that brings a new user experience. The iPhones have the ability to edit the depth-of-field effect which will be available in future updates to iMovie for macOS, Final Cut Pro, and macOS Monterey.

Both the Apple phones have dual rear cameras in a diagonal setup. The new Wide camera, with 1.7 µm pixels, comes with the biggest sensor ever in an iPhone dual-camera system and is capable of gathering 47 percent more light for less noise and brighter results. There is a Portrait mode for video for cinematic video recording and one can also shoot in Dolby Vision HDR.

Apple iPhone 13 Pro and Pro Max are the top-notch models from the lineup. These come with the most advanced camera system and battery. The new iPhones feature 6.06 inches (iPhone 13 Pro), or 6.68 inches (iPhone 13 Pro Max)  Super Retina XDR display with ProMotion featuring an adaptive refresh rate up to 120Hz, making the touch experience faster and more responsive.

The devices are powered by an A15 Bionic chipset with 5-nanometer technology with a new 6-core CPU with two new high-performance cores and four new high-efficiency cores. It features a new 5-core GPU to offer the fastest graphics performance ideal for video apps, high-performance gaming, and the slate of new camera features. 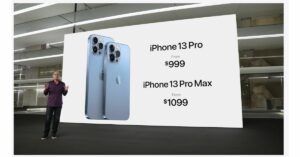 A new 16-core Neural Engine capable of 15.8 trillion operations per second enables even faster machine learning computations for third-party app experiences, as well as features like Live Text in Camera with iOS 15.

In terms of cameras both the Pro models are highlighted with a triple rear camera set up. It includes a 77mm telephoto lens that allows users to get closer to their subjects while recording video and achieve even more classically framed portraits, offering 3x optical zoom for a total 6x optical zoom range on the camera system, f/1.8 aperture ultra-wide-angle camera with macro photography and a new autofocus system, bringing a 92 percent improvement for low-light environments. 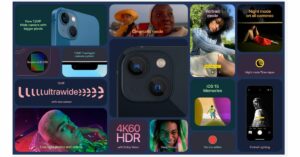 There is an f/1.5 wide-angle lens that offers a massive improvement in low-light situations. The camera set up also offers Dolby Vision HDR video recording. Sensor-shift optical image stabilization (OIS) will be available on both models, which stabilizes the sensor instead of the lens.  iPhone 13 Pro and iPhone 13 Pro Max also offer popular features like Deep Fusion, Apple ProRAW, and Portrait mode with Portrait Lighting.

Night mode comes to all cameras on iPhone 13 Pro and 13 Pro Max, including the Telephoto camera. Users can also adjust the level of bokeh in the Photos app and iMovie for iOS, and coming soon to iMovie for macOS and Final Cut Pro.

Both the phones will be available in pink, blue, midnight, starlight, and (PRODUCT)RED in a new entry-level capacity of 128GB for double the storage, as well as 256GB and 512GB capacities. 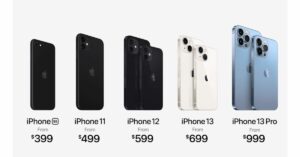 Komila Singhhttp://www.gadgetbridge.com
Komila is one of the most spirited tech writers at Gadget Bridge. Always up for a new challenge, she is an expert at dissecting technology and getting to its core. She loves to tinker with new mobile phones, tablets and headphones.
Facebook
Twitter
WhatsApp
Linkedin
ReddIt
Email
Previous articleApple Watch 7 released: Price, features and design
Next article15 September 2021 Amazon Quiz: Participate and win Rs 25,000 Pay Balance