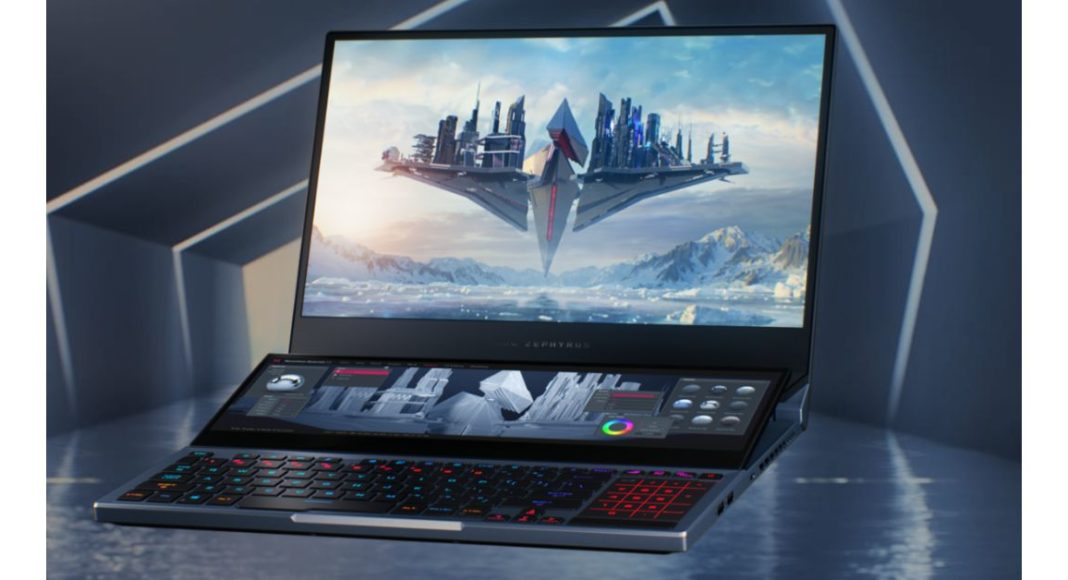 Recently the computing hardware manufacturer Intel, as well as Nvidia, have announced their respective most recent processors and graphics cards. Before long the Taiwanese company Asus announced its series of new gaming laptops in India which comes equipped with the new hardware. The company has launched a  dual-screen ROG Zephyrus Duo 15 gaming laptop. The older models from the company have received an upgrade while the latest laptops now come with a dual-screen. Until now the launch date of the Asus gaming laptop is still not known. The company has also chosen to keep mum on the pricing also.

The all-new ROG Zephyrus Duo looks similar to the company’s ZenBook Duo that was launched last year. The gaming laptop comes with a secondary ScreenPad Plus screen which also serves as multiple monitors on the laptop. The device comes equipped with the new Core i9-10980HK CPU and GeForce RTX 2080 Super GPU. It features a primary 15.6-inch screen which can be chosen between UHD at 60Hz  and Full HD at 300Hz. Whereas the secondary screen is a 14.1-inch touch screen panel with 3840×1100 pixels of resolution whereas the primary screen does not support touch. The company has designed the hinge in such a way that it can be raised at a 13-degree angle that also enhances the user’s performance while leaving a gap for a better cooling system at the bottom.

ROG Zephyrus Duo 15 is powered by Intel’s up to the minute 10th Gen Core i9 or Core i7 CPUs paired with Nvidia’s latest GeForce RTX 2080 Super or GeForce RTX 2070 Super discrete GPU for improved performance. It is offered with DDR4-3200 RAM with a free SODIMM slot which allows it to further expand up to 32GB. The Asus ROG laptop will be offered with dual NVMe M.2 SSDs in RAID 0 for speed. The users will also get 2 x 4W speakers with Smart AMP technology with ESS Sabre DAC along with array microphones offering voice control. The device boasts a 90Wh battery that is supported by a 240W charger.

Whereas the older models from last years such as ROG Zephyrus S17, ROG Zephyrus M15, ROG Strix Scar and ROG Strix G15 laptops have also been upgraded with the latest Intel and Nvidia hardware. Many of the models from the range of laptops will be offering 300Hz display options along with rel Adobe RGB colour space coverage and a liquid metal thermal conductive material have been used for the better cooling system which has been developed by Thermal Grizzly.

Komila Singhhttp://www.gadgetbridge.com
Komila is one of the most spirited tech writers at Gadget Bridge. Always up for a new challenge, she is an expert at dissecting technology and getting to its core. She loves to tinker with new mobile phones, tablets and headphones.
Facebook
Twitter
WhatsApp
Linkedin
ReddIt
Email
Previous articleApril 3 Amazon Quiz: Participate to win Firefox Mountain cycle
Next articleApple might launch iPhone SE today, new storage and colour models tipped: Report